On another beautiful Santa Barbara afternoon, the No. 13 UCSB baseball team was able to pull out a tight victory after being down 4-0 to the University of Nevada, thanks to clutch hits that led to its eventual 5-4 win. 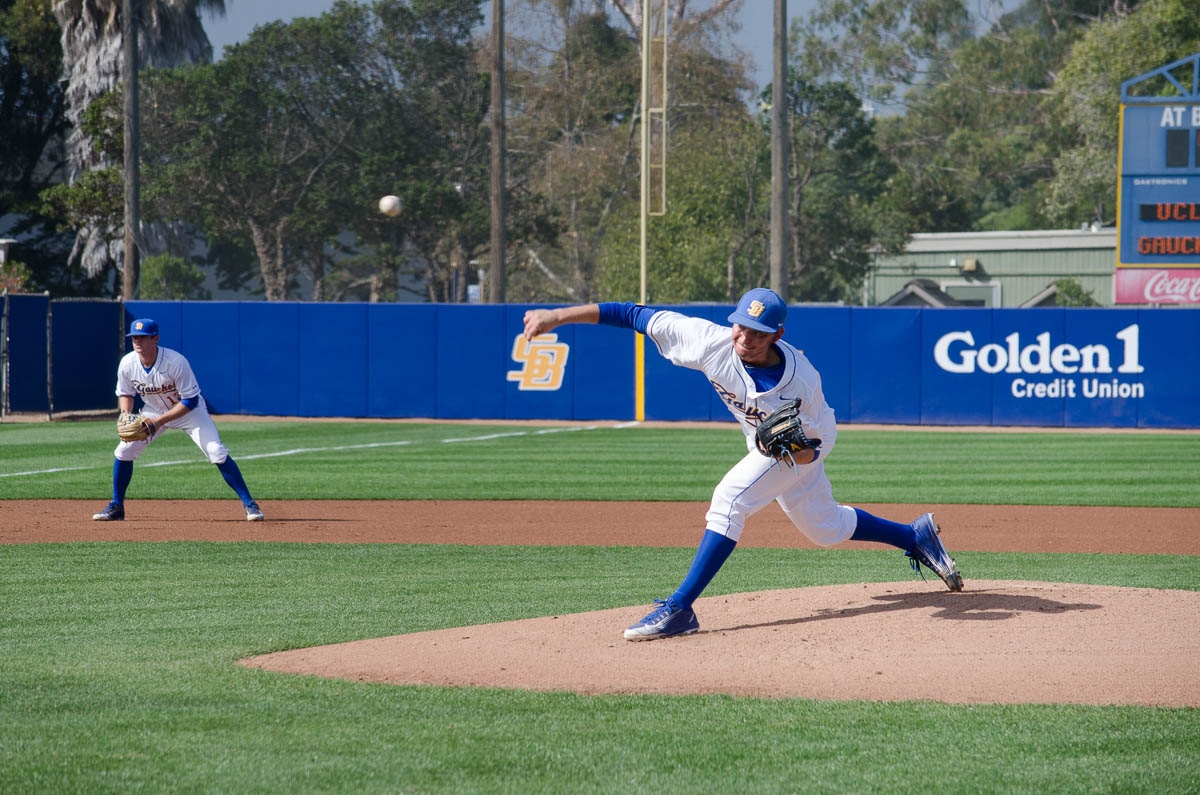 “We’re just reaping the rewards of the hard work we’ve put in all year.” Sophomore infielder J.J. Muno said. A perfect description for a relaxed UCSB team that continues to find new ways to win.

The comeback victory improves the Gauchos overall record to a solid 25-7-1, while also being first in the Big West with a 5-1 conference record. The WolfPack drop to 15-19 on the season and has now lost six straight games after previously having won eight of their last nine matches.

Nevada started the second inning with a leadoff double to left-center field by designated hitter  sophomore Cole Krzmarzick. Following a sacrifice bunt and a line-out, UCSB pitcher Kyle Hatton lost control of the inning, walking and hitting the next two batters before allowing a two RBI single to center field off the bat of shortstop Justin Bridgman.

After hitting the right fielder Trenton Brooks to again load the bases, Hatton overthrew a pickoff attempt to first base, allowing Nevada to score catcher Kaleb Foster and Justin Bridgman before a deep fly ball to center ended the inning with the WolfPack holding a 4-0 advantage.

Despite the rough stretch, coach Andrew Checketts stuck with his freshman lefty which payed off as Hatton settled in nicely, throwing four and a third more innings of scoreless baseball.

The Gauchos started a scoring barrage of their own in the bottom of the third, led by standout Muno who hit a single to right field. After advancing to second on a wild pitch and stealing third, freshman second baseman Tevin Mitchell hit Muno home with a scorching double to right-center field.

Following walks from redshirt junior Andrew Calica and redshirt sophomore Josh Adams to load the bases, redshirt sophomore catcher Dempsey Grover singled to center field bringing in both Mitchell and Calica for a total of three runs in the inning.

Sophomore Kyle Nelson’s first inning was impressive considering he inherited runners on first and second base left by the starter Hatton. After coaxing a fly out to center from junior right fielder Trenton Brooks, senior third baseman Bryce Greager reached first to load the bases on a fielding error by Muno. The left hander showed his resiliency, however, and struck out the final batter to get out of the inning unscathed.

Carrying a 4-3 deficit into the bottom of the eighth, the Gauchos started the inning hot with a double rocketed down the left field line by Grover. Junior utility Billy Fredrick followed with a weak bunt, but was able to beat the throw to first with a beautiful slide.

Redshirt junior Devon Gradford, a defensive substitute in the top of the frame, then reached first on a fielding error by the first baseman Jordan Pearce, advancing Fredrick to second and scoring Grover, tying the game at four.

Muno then bunted the two baserunners over to second and third before a long fly ball by senior Ryan Clark, pinch hitting for freshman Tevin Mitchell, was caught by the center fielder who was unable to throw out Billy Fredrick tagging up from third giving the Gauchos their first lead of the game at 5-4.

Despite a single in the last inning by junior shortstop Justin Bridgman, Nelson had no problem shutting down the Wolfpack, and earning his sixth win of the season.

Muno was the star of the game for UCSB, going two for three and making several essential plays for his team, especially his batting work in the third and eighth innings. He continued his stellar play from the weekend series against Cal State Northridge, showing his versatility in his ability to toggle between second and third base.

Coach Checketts liked the play of his freshman second baseman Tevin Mitchell, who unfortunately is simply buried on the depth chart by the wealth of infield talent on the roster. Checketts noted, however, that Mitchell, “had really good at-bats, played good defense at second base,” and that they see him as a, “future star.”

The Gauchos next game is Friday, April 22 against their biggest rival Cal Poly at 6 p.m. at Robin Baggett Stadium.