The No. 75 UCSB women’s tennis team closed out the weekend and the regular season on a high note extending its win streak to five matches, defeating Big West Conference rival Cal Poly and Santa Clara University. The Gauchos nearly swept the Mustangs with a 6-1 victory and went on to earn a 4-2 road win at Santa Clara. 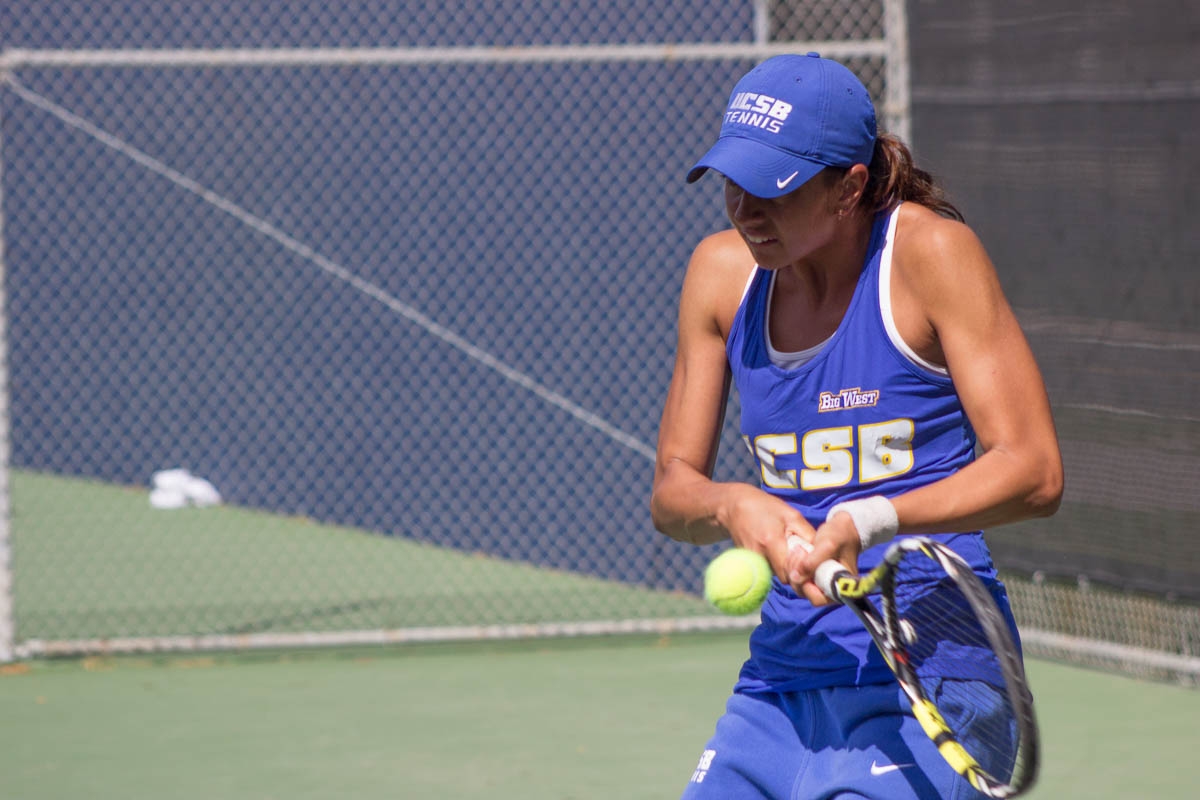 Santa Barbara started off the weekend as one of the top teams in the Big West standings and after its recent performance has cemented its position in second-place behind reigning Big West champions Long Beach State.

In addition to an end to the regular season, this weekend signaled an end to Santa Barbara’s conference schedule. UCSB finished with a 7-1 Big West record, while LBSU remained undefeated at 8-0, and Cal Poly ended its campaign 1-7.

UCSB is a tough team to beat having only collected losses to top teams in the country this season. The Gauchos are a team to keep an eye out for during the Big West championships and are aiming to make a memorable run for the NCAA regionals.

“It never really surprises us when we win. We are a dangerous team,” Head Coach Simon Thibodeau said. “We are a sleeping team that is not ranked as high, but we are right there and we are playing better. We are ready to roll in the Big West, we can beat everyone in the conference.”

On Saturday, Santa Barbara continued its efficient play against the Mustangs. Sophomores Lou Adler and Amanda Atanasson earned victories as they made quick work of senior Bryn Bacharach and freshman Celine Gruaz on court three.

No. 21 ranked doubles duo junior Stefani Stojic and sophomore Palina Dubavets were ahead 5-0 before the match went on unfinished as Yamada and Baker were able to clinch the doubles point beforehand.

With the score at 1-0, the Gauchos continued to outperform the Mustangs winning the next five points in singles never trailing at any point during the match.

Adler, Dubavets, Stojic, junior Jamiee Gilbertson, and Atanassan all won their singles matches in convincing fashion extending the lead and ensuring the win against Cal Poly. With the score at 6-0, all eyes were on court six as sophomores Molly Reed and Natalie Da Silveira were in their third set.

The first went in Da Silveira’s favor as she edged out Reed 6-4. Reed came back in the second set winning 6-2, to force a third set between the two.

Neither player would give in easily, putting up 18 points between each other in the third set.

The Mustangs received their first team point as Reed put 10 past Da Silveira in the third set. Reed extended her singles win streak to three straight and ended her season going 6-4 in singles.

With their momentous win to close out the Big West, the Gauchos turned around to wrap up their regular season against a tough Santa Clara team.

Originally scheduled for a meeting in March, the match had to be postponed because of rain.With no rain clouds in sight, Santa Barbara and Santa Clara entered into a tough contest between two talented teams.

The Gauchos managed to ensure a one point lead after winning the Doubles Point. Both pairs consisting of Dubavets & Stojic as well as Yamada & Baker won their respective sets 6-4 to start the match strong for UCSB.

During the singles matches, the Broncos won two of the following five matches to get on the scoreboard. However, with strong play from Lou Adler, Stefani Stojic, and Natalie Da Silveira Santa Barbara won the match 4-2.

UCSB’s two wins to conclude the season helped it to wrap up its campaign with a 15-7 overall and 7-1 Big West record. UCSB look to enter the big west tournament and dominate and avenge its only conference loss, 4-3, to Long Beach State.

“We can dominate at each position. We lost 4-3 to Long Beach, [but] we still feel we can close out every team in the BWC 7-0 if we play well,” Thibodeau. “We are playing more together, we are more focused knowing the Big West [Championships] are coming. We are focused.

Able to clinch the No. 2 seed in the conference championships, UCSB will likely face Cal State Northridge, who finished seventh in the Big West standings, on Thursday, April 28 at 8 a.m. The championships will take place at the Indian Wells Tennis Garden.