The Daily Nexus
News
Interactive Cigarette Bins May Be Coming to Isla Vista
April 16, 2016 at 2:30 pm by Nicholas Bogel-Burroughs and Annie Golay

A new proposal would bring interactive cigarette receptacles to Isla Vista that discourage littering by allowing smokers to vote on various questions with their cigarette butts.

The I.V. Recreation and Parks District (IVRPD) showed its support Thursday for 10 new receptacles in the I.V. business district and at beach access points, voting 4-0 to recommend their installation. The plan, introduced by Adopt-A-Block, will still need to be approved by the county next week, but if it is successful, the bins would likely be installed before June. 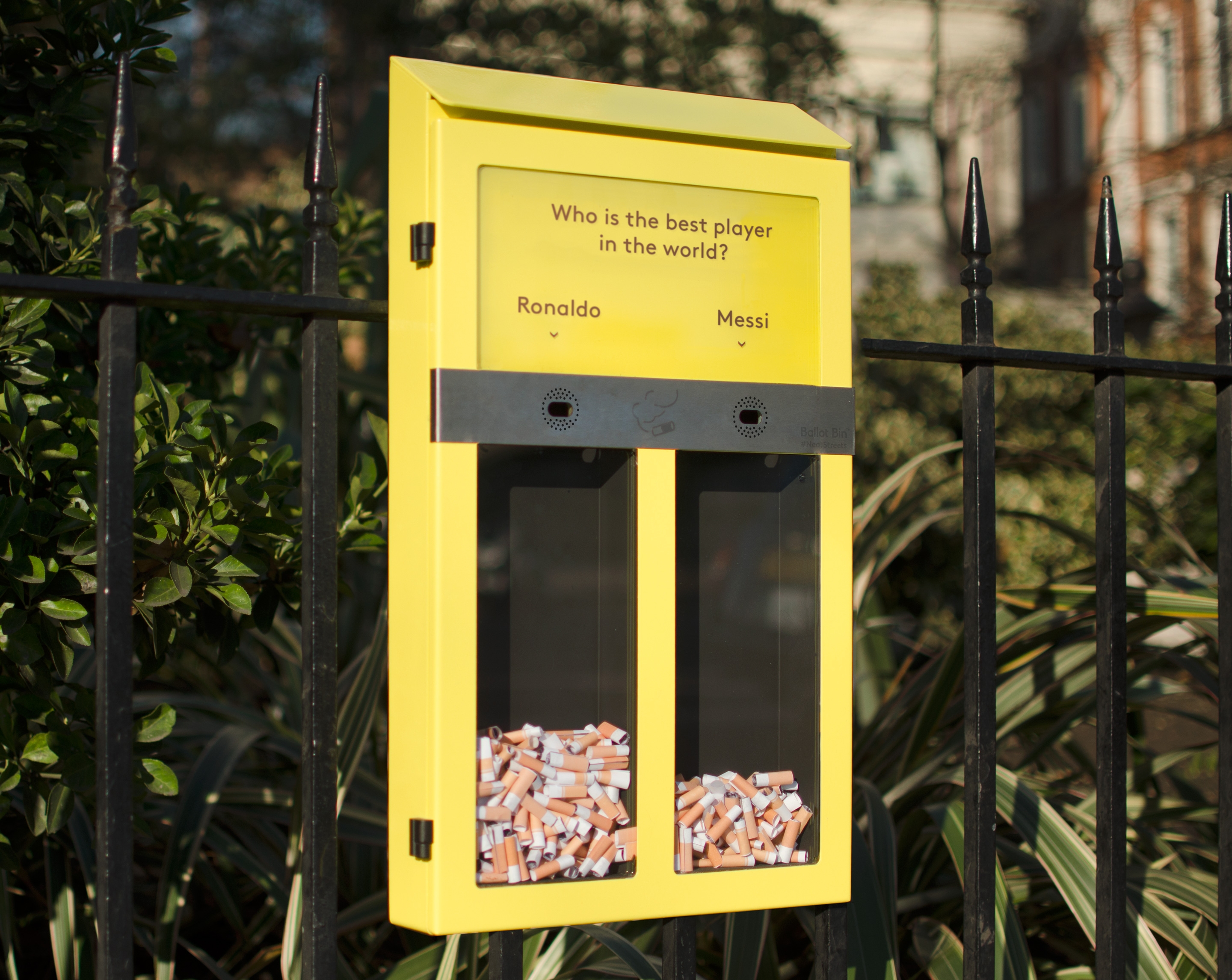 The receptacles, made by Hubbub, allow smokers to vote on interchangeable questions with their cigarette butts. Courtesy of Adam Porté

“People come across through the [Pardall] Tunnel, smoke their cigarettes and throw them on the ground,” said Adopt-A-Block Supervisor Adam Porté at the IVRPD meeting, adding that the new receptacles would “gamify the experience and make people want to throw them in the receptacle.”

Adopt-A-Block is able to propose the purchase of these receptacles because of a $5,000 grant from Keep America Beautiful, a national organization dedicated to ending littering.

Ylse De Los Santos, Adopt-A-Block assistant and a fourth-year sociology and feminist studies double major, was instrumental in ascertaining the grant. She hopes the cigarette butt bins will be “an eye-opening experience” for students and I.V. residents.

“Maybe if they see these ash receptacles, they’ll want to learn more about why we’re doing this project,” she said. “We’re hoping that having these receptacles will have a positive impact.” 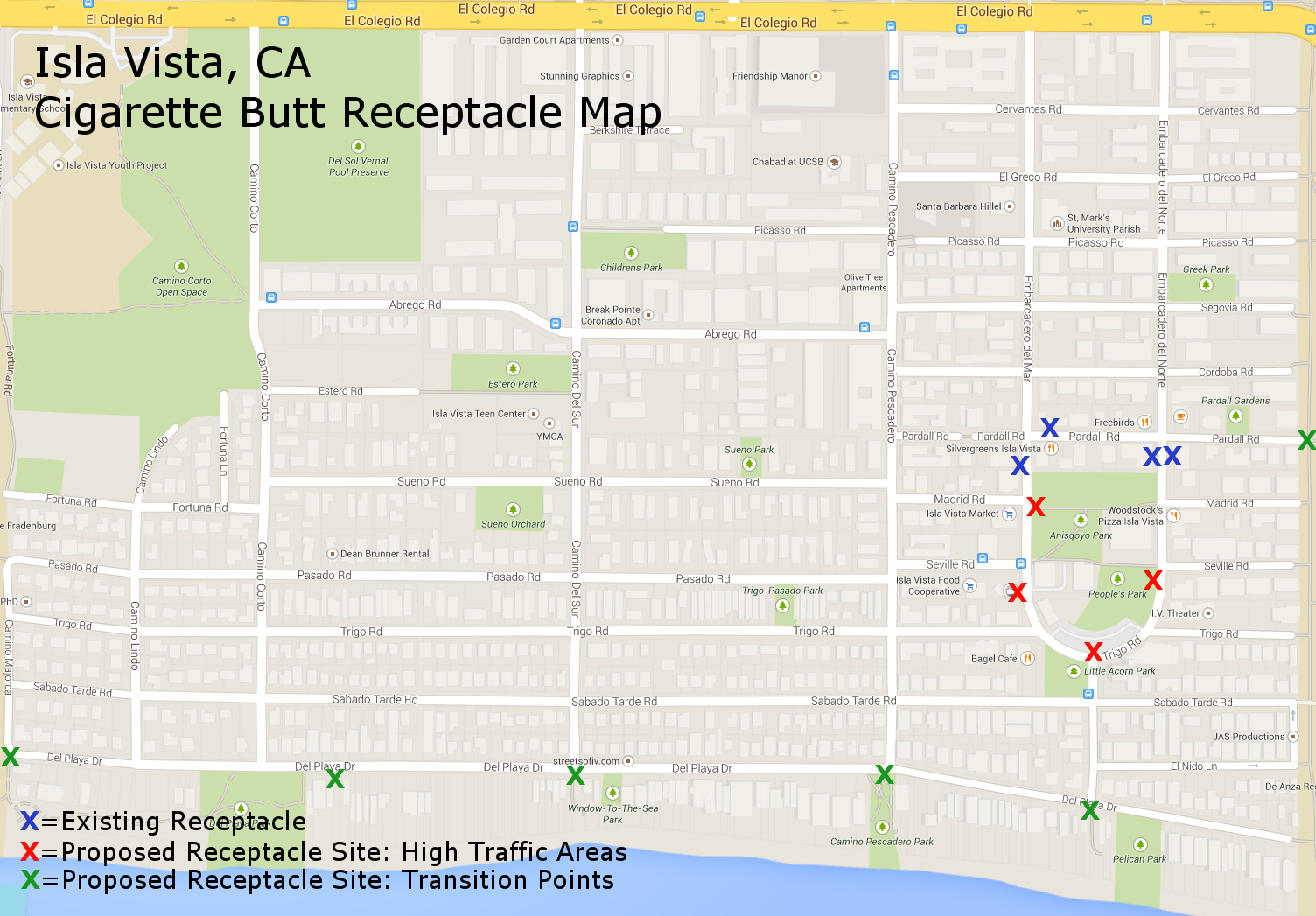 The red and green Xs mark where the new receptacles would be located. Courtesy of Adam Porté

Porté warned the IVRPD board that the grant came with many restrictions, including size requirements for lettering on signs and a stipulation that half of the $5,000 be used on the receptacles themselves.

Any additional money would be used to install new “no smoking” signs in all of I.V.’s parks, Porté said.

Porté said that, in recent years, Adopt-A-Block volunteers have picked up more cigarette butts than any other kind of trash, including a total of 9,000 butts in less than two hours after Deltopia 2015.

The proposed receptacles are designed by Hubbub, a London-based organization, and allow for the poll questions to be switched in and out. Porté said an example question could be, “Do you live in Isla Vista?” allowing smokers to stick their butts in the “yes” or “no” slots and watch the votes add up. 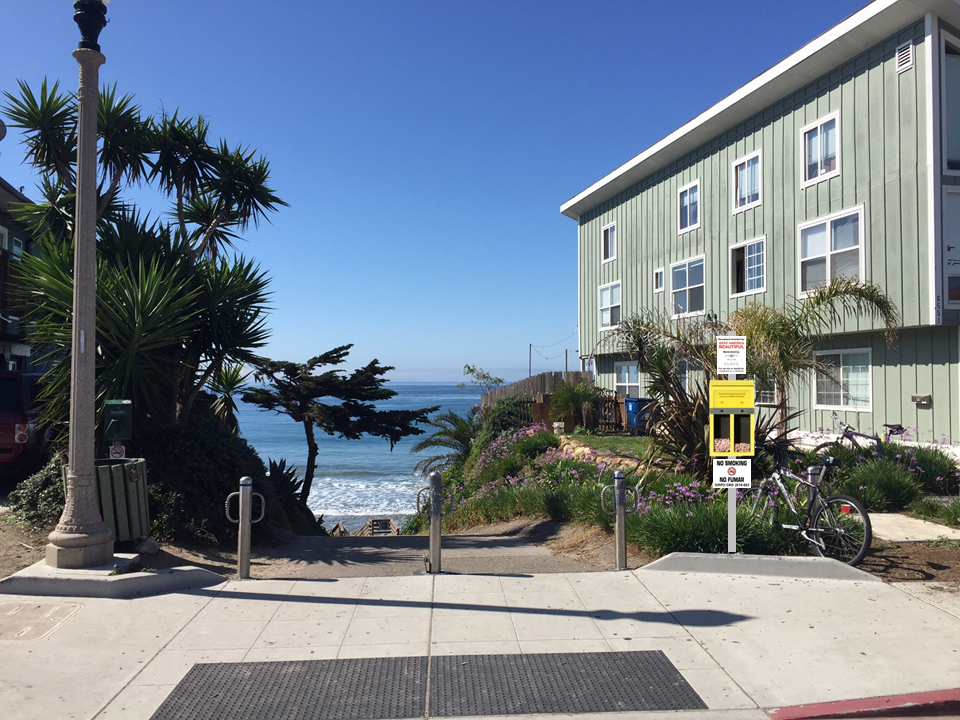 A mock-up of what the new bin would look like on Del Playa Dr. Courtesy of Adam Porté

Five of the new receptacles would be located at beach access points on Del Playa Dr., four would be around the business district loop and one would be at the end of Pardall Road by the tunnel between I.V. and UCSB.

All four IVRPD members were enthusiastic about the receptacles (Director Dave Hubbard was absent), and IVRPD Chair Pegeen Soutar said she thought they were “so necessary.”

“I’m amazed how many people just thoughtlessly [throw their cigarettes on the ground],” Soutar said. “Even smart, intelligent people I know do that.”

Jeremy Levine, a first-year economics major and the volunteer chair for the Environmental Affairs Board, remained skeptical about the receptacles’ impact on littering students.

“The fact that it’s so much of a problem means that a few receptacles in nice places might make a little difference, but overall I don’t think people will even be aware of them,” Levine said. “I think the receptacles will have a positive impact and it’s unfortunate that it won’t be more.”

But Porté said trash in I.V. has been “steadily declining” over the last two years, and that the new receptacles are a way to continue that trend for the “most littered item in the world.”

“It feels like the culture in Isla Vista is changing a little bit, and this is another way.”

Why not just ban this terrible, destructive drug that does absolutely no good to anyone?

“Please almighty State, save me from myself!”

Oooh maybe I’ll start smoking so I can have a voice and vote!!!

Or, you could pick them up off the ground and vote with those…