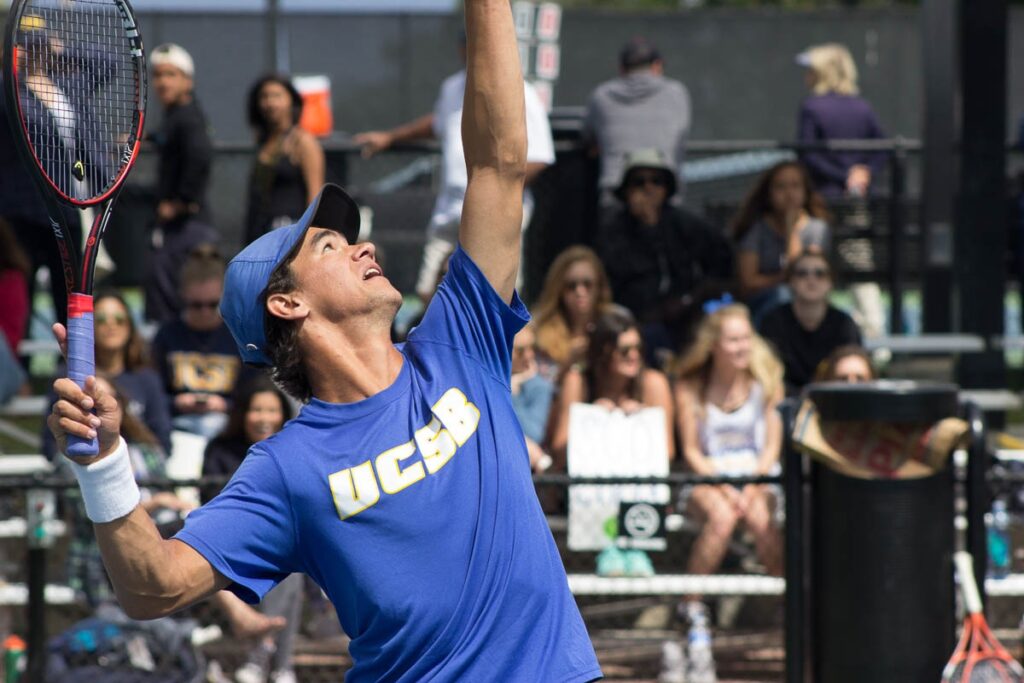 The sport of tennis is unlike any other. You may play on a team as an individual within singles competition or with a partner in doubles, but at the end of the day the weight eventually finds your shoulders to sit upon.

To play at the competitive level it takes drive, commitment, and opportunity; not just for one day but the next day as well.

This is a story that Miles Seemann, a senior playing in his third year for the UCSB men’s tennis team knows very well. Coming from a family of tennis players where his father Walt played in college and his mother Lisa earned prominence at the professional level, Miles held a racquet for the first time at an early age.

The path to play in the competitive atmosphere often calls for sacrifice and usually requires drastic changes within the life of a player searching for success. Some are home schooled so that they can travel to gain experience and exposure and others come from overseas to join colleges and play in the NCAA.

For some of the nation’s best, this is a popular and potent route, but in looking at the unique journey of the Gauchos’ senior player, it is clearly not a definite path for all.

Miles Seemaan is an anomaly. The local player from Solvang, CA has traveled an unbeaten path that began at Santa Ynez High School, which holds a Division IV athletic program.

“Our conference was very small and I actually ended up being undefeated in both singles and doubles all four years,” Seemann said. “But the High School Public system for tennis doesn’t play as big of a factor as tournaments and tours do, so I didn’t get any offers from DI or DII.”

Despite not losing a single conference match through high school, Seemann was forced to join a lower division school if he wanted to attend a university. Instead, the young man kept his talents local and joined the Vaqueros at Santa Barbara City College.

Seemann had made the right choice as in his first and only year at SBCC he played well enough to be ranked No. 2 in doubles and No. 4 in singles play for all California junior colleges.

As a result of his immediate success, Seemann was discovered by the Gauchos and joined their team as a walk-on, making it to the level that all players dream of after a ride that most couldn’t handle.

This was just the beginning.

“Miles was not a player that was on our radar for recruiting out of high school,” Head Coach Marty Davis said. “We watched his progress at City College after seeing him play at an interclub match and knowing that he had some talent. Now he has progressed to one of the better doubles players in the country.”

His decision to attend UCSB was again a fruitful one as not only did he climb to success, but SBCC’s men’s tennis program was cut the following year due to a plethora of these very same cases of one-year players.

In spite of his timely departure from SBCC’s program, Seemann didn’t settle for the vanquishing of his former tennis team.

Seemann and Davis helped revive the Vaqueros program this past season, which is just a small testament to the greatness that Seemann brings both on and off the court.

In his early career with the Gauchos, Seemann played on the lower courts in singles and acted as a strong doubles partner finding success with any pairing. He helped UCSB to a couple of strong seasons before redshirting last year due to back issues. As he entered his final season of collegiate tennis, the true magic began to happen.

In his senior year, the success started well before dual matches came along. Paired up with a fellow senior player in Nathan Eshmade, Seemann and his partner were entered into one of the state’s most prestigious tournaments, the 59th edition of the Southern California Intercollegiate Championships.

Knocking down several tough, ranked opponents along the way, the duo was crowned in the final round after winning five straight matches.

“It’s very humbling to see my name alongside of all the great players that have won this tournament and to bring the doubles draw championship to UCSB for the first time,” Seemann said. “Multiple doubles players that have been ranked No. 1 in the world have held this same title and it’s very inspiring.”

After winning the tournament, Davis asked Seemann to continue working on his two-man game and become a doubles specialist for the team. As the dual match season began, the hard work began to show once more as the duo of Seeman and Eshmade started knocking teams off, even those of the highest caliber.

“These guys really play tennis the right way, they compliment each other so well, and are just so beautiful to watch,” Davis explained. “At this level you never expect anyone to be a lock and essentially these two have been a lock for us all season playing on court one.”

In dual match play, this No. 1 Gauchos duo currently holds a 12-4 record having topped two ranked doubles opponents and have won nine of their last ten matches.

They have only been topped once this season by an unranked opponent and this strong Santa Barbara team has held a ranking of its own throughout a majority of the year that went as high as No. 23 in the nation. Since this ranking, the duo has only lost one match.

“It’s really just a dream come true to see how well we have played this year,” Seemann said. “It’s been a great journey, I honestly never thought that I would ever be ranked in the nation in Division I doubles and again it is just so humbling to see my name next to all of these great players.”

Despite not taking the usual route to the highest level of collegiate tennis, through hardwork and dedication Miles Seemann found himself amongst a crowd of the very best. His name is truly etched in Gaucho history.

The journey is not over for this amazing young man whose coaches and teammates had nothing but kind words. Seemann will be playing in his final home match for the UCSB Gauchos tomorrow afternoon and will be honored at the team’s annual senior day alongside partner Eshmade and fellow senior Andrew Riminton.