Nearing the end of the regular season, things are looking good for the No. 75 UCSB women’s tennis team as it prepares to wrap up its Big West Conference schedule against rival Cal Poly this Saturday.
The following day Santa Barbara will travel to the Bay Area to play Santa Clara in a match that had been postponed early on in the season due to rainy weather.

Currently 13-7 overall and 6-1 in conference play, UCSB enters its road trip with a 4-1 record in away matches. Santa Barbara has also won eight of its last ten matches. 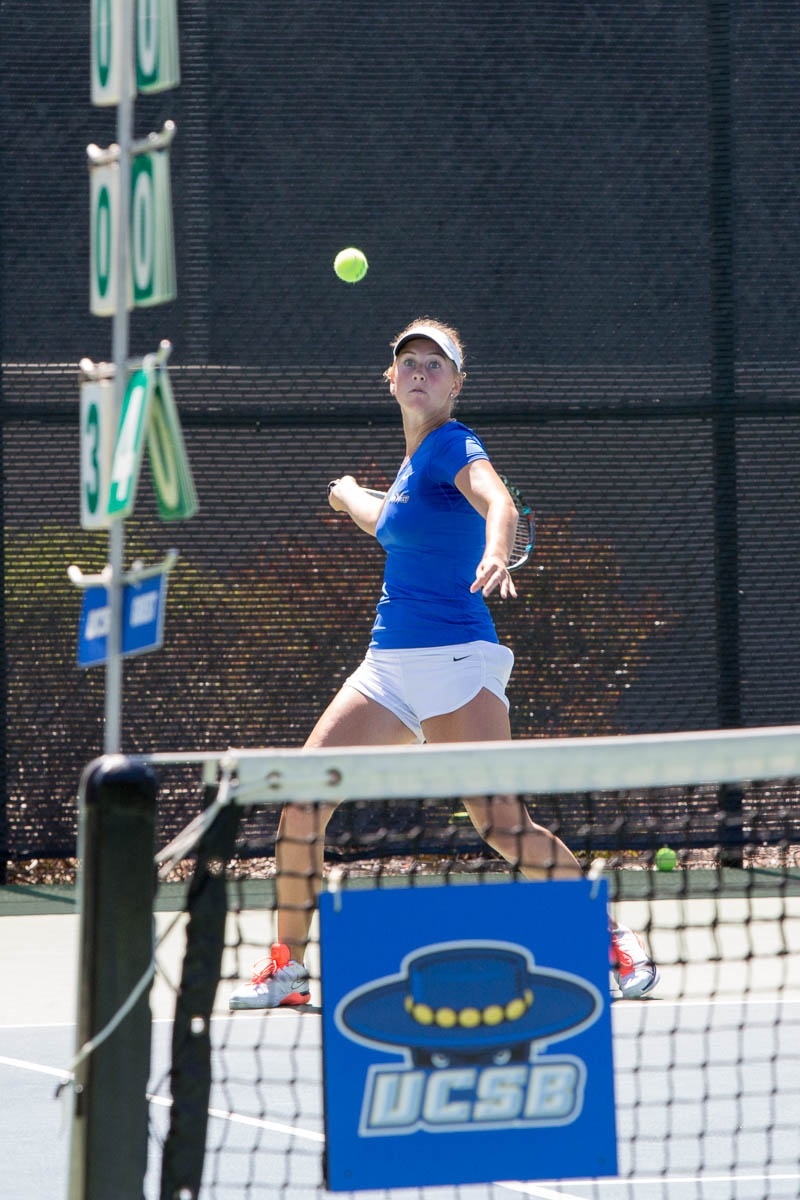 Palina Dubavets watches the ball as it flies out of the court. Dustin Harris / Daily Nexus

With just two matches remaining, Cal Poly has had a tough season thus far, sitting at 3-13 overall. On a two match slump, the Mustangs are 1-6 in conference play and are 1-4 in their last five matches.

Santa Clara has been on the rise lately, ranking in the top four of the West Coast Conference and owning a 10-7 overall, 3-3 conference record.

In hopes of remedying its losing woes, Cal Poly has used 14 different pairs in doubles play, making adjustments over three times at the one slot.

Yet, the changes have brought some encouragement along as the 14 different doubles duos have accumulated a total of 11 winning sets at a .314 win percentage.

Cal Poly’s doubles combination of senior Dane Joubert and sophomore Zoe Oedekerk will likely face UCSB’s No. 21 doubles pair of junior Stefani Stojic and sophomore Palina Dubavets.
Joubert and Oedekerk have led the Mustangs at the No. 1 doubles matchup with a 2-4 record. They are also 0-1 against nationally ranked pairs.

In singles, sophomore Molly Reed, a native of Sheffield, England, has led Cal Poly with the most matches won.

She holds a 6-4 record and has been utilized from the three to the six slots, finding success mostly at the six.

It will be important for the Mustangs to establish consistent play on the court versus a peaking Santa Barbara team that is currently only behind Long Beach State in the Big West standings.

While UCSB may be favored against Cal Poly, it will embrace a more difficult challenge at Santa Clara.

The Broncos happen to be riding a two match winning streak. Aside from its wins and losses, Santa Clara seems to have also discovered its identity with a talented depth chart.

When competing in doubles play, the Broncos currently have a win percentage of .556.

Leading the team are juniors Nabila Farah and Daniella Silva with an 8-8 dual record all at the one.

Complementing the pair of juniors are freshman Madison Clarke and senior Chelby Cooke as they possess a 10-4 record at the second slot. However, against nationally ranked doubles competition Santa Clara is 0-2.

In singles, leading the team is junior Daniella Silva. She is 12-6 overall and presents a versatile skillset that has served as beneficial for the rest of the team as she has found success in matching up with the competition on the one, two, three and four courts.

The Gauchos’ match at Santa Clara will be their last of the regular season. Currently on a three-match winning streak, UCSB has the opportunity to enhance its momentum heading into the postseason as the Big West Tournament is to begin on Thursday, April 28.

UCSB faces Cal Poly this Saturday, April 16 at 10 a.m. It will have another morning match on Sunday, April 17 at Santa Clara set for a start time of 11 a.m.

A version of this article appeared on page 18 of April 14, 2016’s print edition of the Daily Nexus.