The Daily Nexus
Sports
UCSB Swept by UCR, Unable to Preserve Leads
April 11, 2016 at 5:04 am by Antonia Bird

The UCSB softball team was unable to carry the momentum from its strong start versus Cal Poly to begin Big West play into its most recent weekend series, as it got swept in three games by the UC Riverside Highlanders.

Following this past weekend’s series, the Gauchos now sit at an overall record of 20-20 and are 3-3 in conference play. The Highlanders improved to 26-12-1 overall and have a conference record of 3-3 as well. 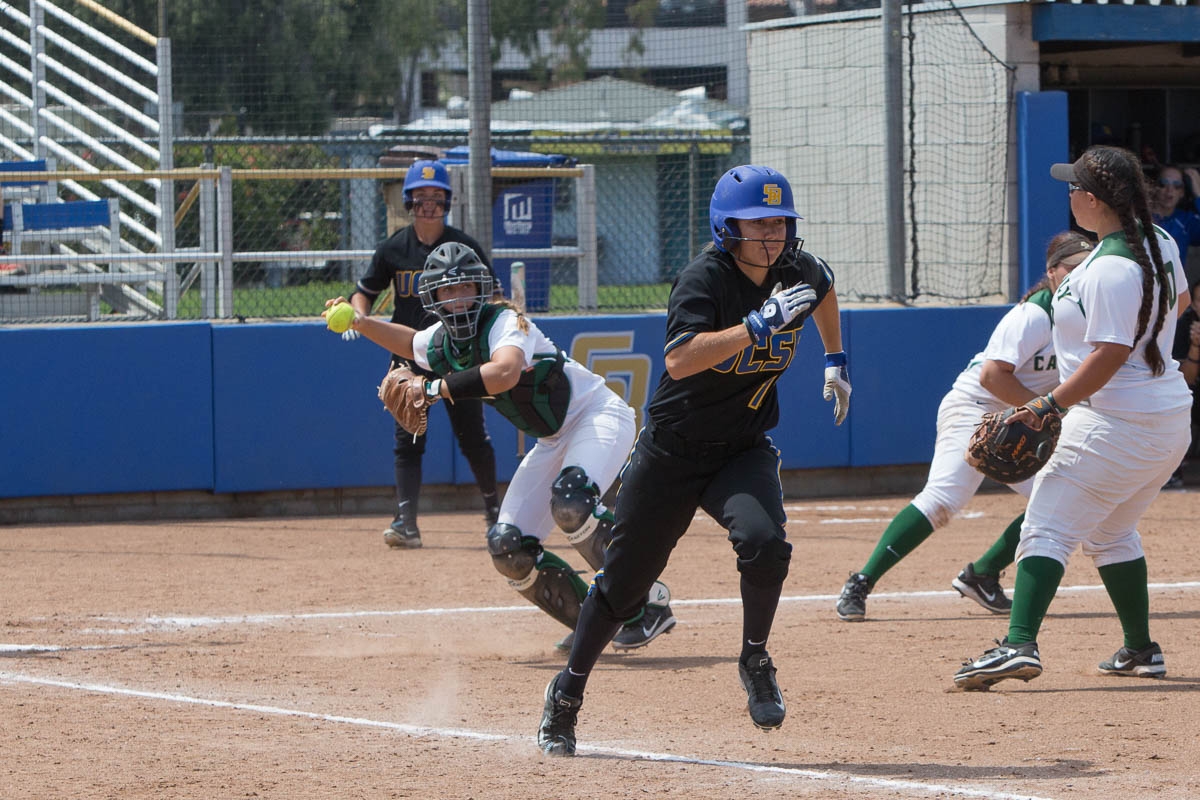 After a short bunt, Stacy Cavazos sprints to first base. Dustin Harris/Daily Nexus

UC Riverside took the first game Saturday morning with a 4-0 shutout due to some timely hitting and consistent pitching by UCR starter Tayler Misfeldt.

Misfeldt pitched a complete game six-hit shutout to pick up her 15th win of the year. She struck out three and shut down a Gaucho lineup which dominated in their last series against Cal Poly. Gaucho catcher Samantha Stark was the lone bright spot for Santa Barbara as she had 3 hits on the day.

The Gauchos did see some hope when they rallied to load the bases with two outs in the fourth inning. With freshman infielder Sierra Altmeyer, junior infielder Emily Brucelas, and freshman infielder Melanie Menor all on base, Ashley Wright stepped up to the  plate hoping to deliver a key hit.

However, Misfeldt forced Wright into a groundout to end the rally. The Gauchos also rallied in the fifth by putting two runners on with one out, but Misfeldt again left them stranded.

UCSB starting pitcher Ashley Ludlow pitched six innings, and took the loss. She allowed three earned runs and 12 hits in the game. Ludlow got in trouble in the first inning, after back-to-back RBI hits led to an early two-run lead for the Highlanders. UCR continued its attack, scoring again in the fourth and sixth innings.
In the second game on Saturday afternoon, the Gauchos hitting came alive as they dominated the first three innings of the game and took an early a 6-0 lead. However, the Gauchos would soon see it all fall apart as the Highlanders rallied for five runs in the final two innings to beat the Gauchos 7-6 in a heartbreaking defeat.

The Gauchos banged out eight hits in the game, registering two RBI’s each from Kristen Clark and Samantha Stark. Melanie Menor and outfielder Jessica Tetzlaft also had RBI’s.

The Highlanders had 14 hits on the day led by second baseman Haley Harris who went  2-3 on the day with three RBI’s and a run scored. UCR right fielder Madeline Richard also went 3-4 with a run scored and a stolen base.

Gaucho freshman starter Veronika Gulvin endured her ninth loss of the year, giving up seven runs and 14 hits in six innings of work.

Riverside starter Anessa Cepeda pitched 6.2 innings, giving up six runs on eight hits while striking out two batters and walking five. Starter Tayler Misfeldt came on in relief to get the final out of the game to pick up her 16th win of the season.

In Sunday’s game, the Gauchos again suffered a defeat at the hands of the Highlanders who completed the sweep with an eight inning 4-3 victory over UCSB.

The game got off to a rocky start for the Gauchos as starting pitcher Veronika Gulvin gave up two earned runs in the first inning on a two-run homer by Highlander first baseman Natalie Sanchez.

Ashley Ludlow then came on with only one out in the first to take over for the remainder of the game. Ludlow pitched brilliantly and took a 3-2 lead into the seventh until the Gauchos’ defense committed an error allowing the tying run to score.

The game went into extra innings, but would end in Santa Barbara’s demise in the bottom of the eighth as UCSB’s defense completely collapsed. The Gauchos committed three more errors and allowed the winning run to score, handing the Highlanders the game and the series sweep.
Highlander starter Tayler Misfeldt pitched all eight innings for UCR, giving up three earned runs, one in each of the fourth, fifth and seventh innings. She gave up eight hits and struck out four in winning her 17th game of the year. Misfeldt claimed all three wins for the Highlanders in the series.

UCSB will remain on the road for its next series as it will face Cal State Northridge beginning on Saturday.