After canceling a non-conference matchup with UNLV this weekend due to weather, the No. 47 UC Santa Barbara Men’s tennis team traveled south to face conference foe UC Riverside on Sunday. The Gauchos swept the Highlanders 7-0 to add their fourth straight win and remain undefeated in Big West play at 3-0. 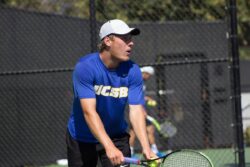 The Gauchos played to near perfection Sunday winning every matchup of the day. They have now swept two of their last three opponents and have forfeited just one point over their last three straight. In a span of 10 days Santa Barbara topped Hawaii 7-0, UC Irvine 6-1, and the UCR 7-0.

The match started with singles play due to weather issues and the Gauchos played with perfection on every court winning all six in sweeping fashion.

Junior co-captain Teague Hamilton was one of the first players off adding his eighth straight in singles play. The Gaucho downed Anderson Ju in identical sets of 6-3, 6-3 on court six and remains undefeated in singles at 8-0 in the dual match season.

Sophomore Cody Rakela had the most convincing win of the day on court five, defeating Calvin Ngo 6-1, 6-1. Rakela has now won eight straight matches playing in singles play as well. The sophomore Gaucho has only lost one set over that time.

The reigning Big West Athlete of the Week, Senior Nathan Eshmade, added a dominant win as well playing on court one. He dropped just three total games and had a shut out 2nd set, defeating Julian Ruffin 6-3, 6-0.

Junior Co-Captain Morgan Mays added a 6-4, 7-6 win on court three followed by a 6-2, 6-2 victory on four from freshman Anders Holm. Freshman Nicolas Moreno de Alboran added a final win for the Gauchos on court two defeating his opponent 6-3, 6-2. Winning the match by a score of 6-0 after singles play, the two teams headed into doubles play giving the Highlanders one more chance to get on the board.

Santa Barbara would shut down Riverside in doubles play as well winning all three matchups. Rakela joined the doubles lineup for the first time this season playing alongside senior Andrew Riminton. The duo defeated their opponents on court three in a close battle 7-6.

Another new doubles team in Senior Miles Seemann and Moreno de Alboran took a win on court one 6-3, and the duo of Mays and Holm defeated their opponents 6-2 on court two.

The Gauchos will now return home for what could be the team’s biggest match of the season with the conference’s next highest-ranking team, No. 67 UC Davis. The Aggies will come to Santa Barbara boasting a league best overall record of 15-3 and are an undefeated 2-0 in conference. Davis will put up its 12-match win streak against the Gauchos.

Friday’s matchup with the Aggies will also be the final home match of the year for UCSB and they will honor seniors Eshmade, Seemann, and Riminton.

The match is set to start at 2pm at the Rec Cen Courts.