The Daily Nexus
News
Free Speech Questions Remain After Chalk Washed Away
April 10, 2016 at 3:01 am by Nicholas Bogel-Burroughs 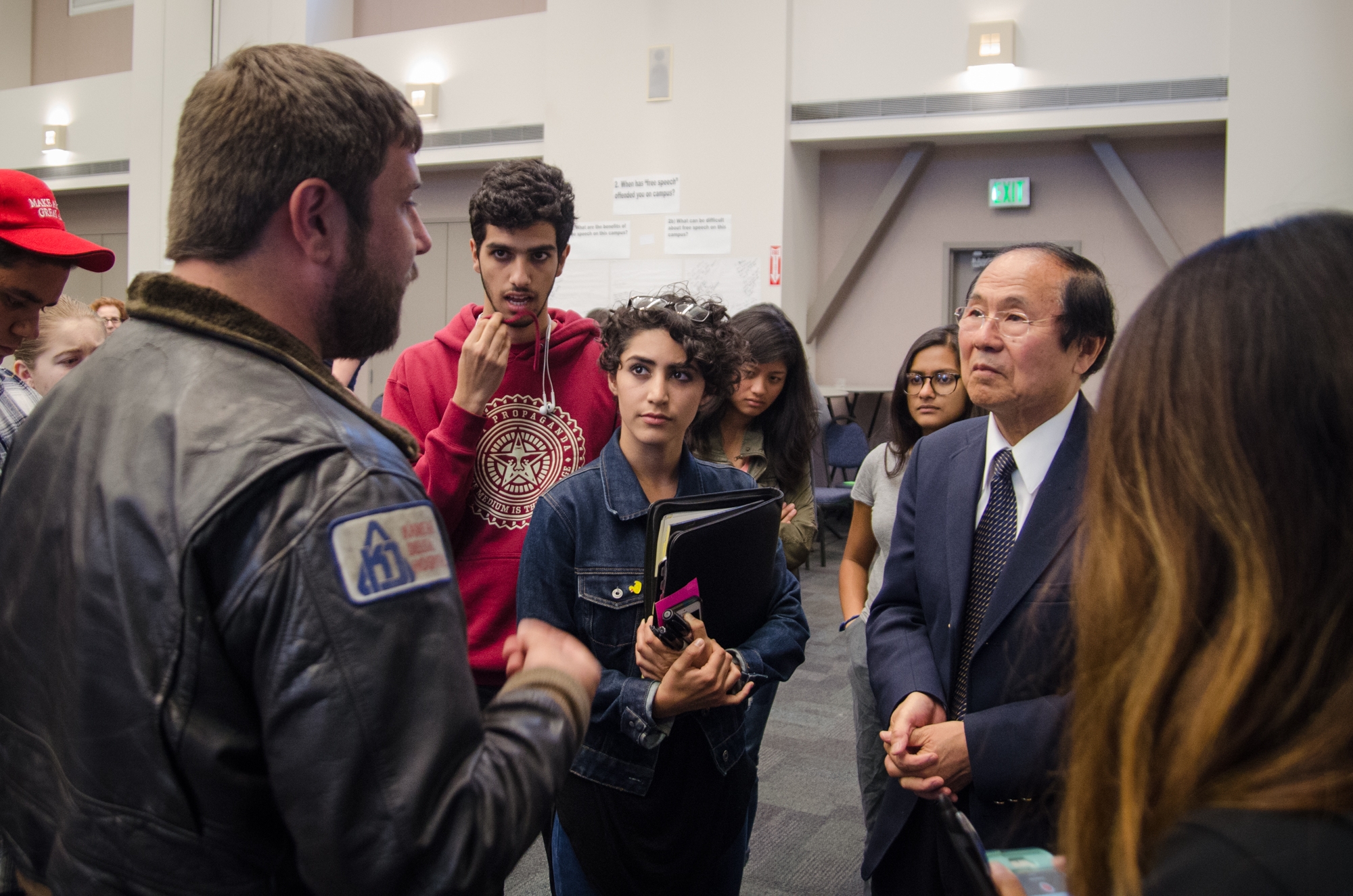 Since phrases disparaging immigrants, Muslims and queer people appeared on campus sidewalks earlier in April, UC Santa Barbara administrators have been grappling with how to encourage free speech and maintain a welcoming environment for students.

UCSB Police Chief Dustin Olson said the chalking is currently under investigation. He said one of the markings on a university building was made using permanent marker, making it “more of a vandalism type incident.”

Olson said officers are reviewing surveillance video and asked that any students with information contact the department.

More than 200 students, faculty and administrators attended a town hall style meeting Thursday at Corwin Pavilion to discuss both the importance of free speech and how that free speech can make students, specifically racial and religious minorities, feel unsafe.

“This is going to be really tense,” said one student as she walked into the town hall, but the meeting was surprisingly civil after an initial argument over whether recording should be allowed. 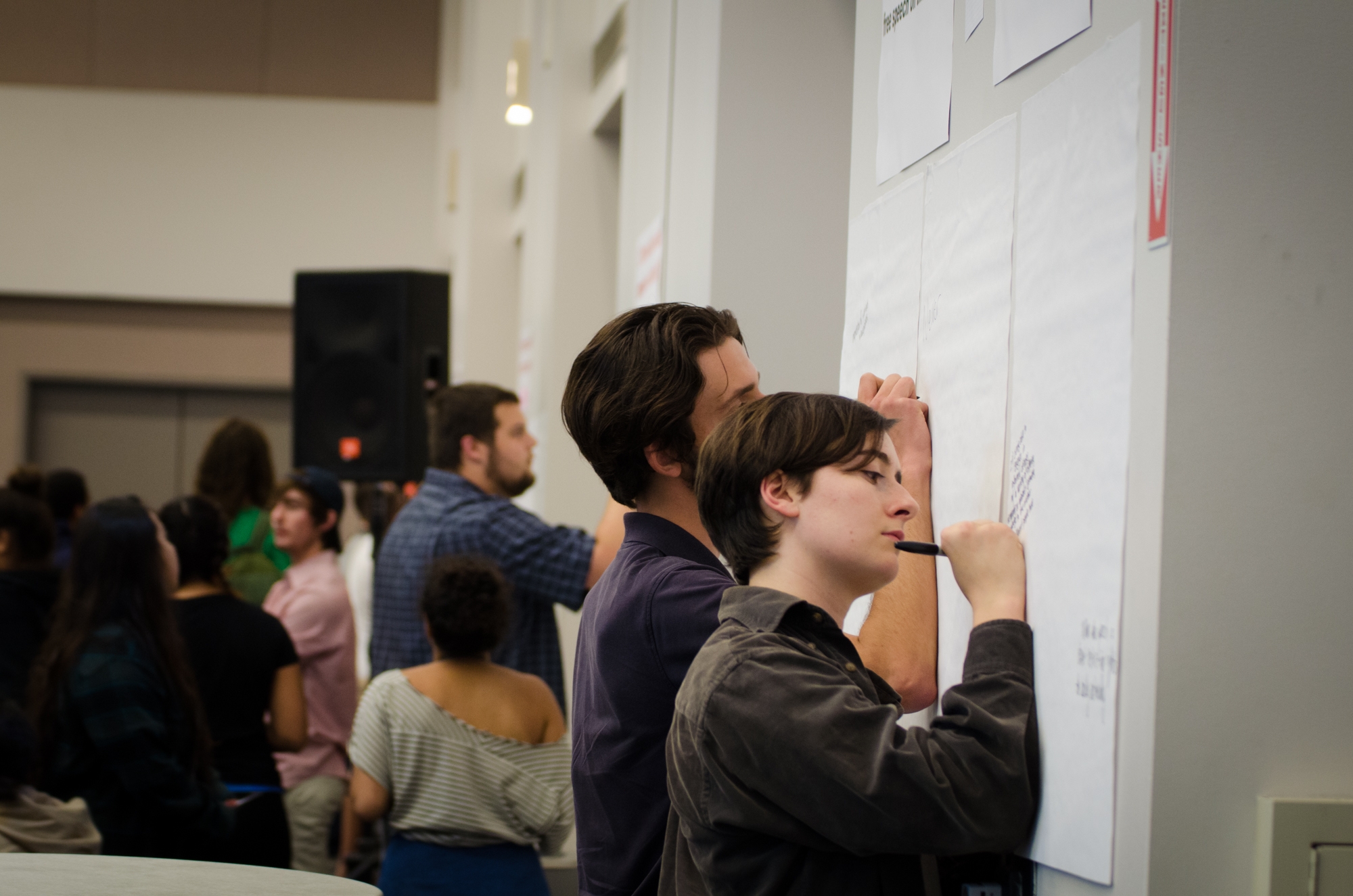 Members of the UCSB community used markers to respond to questions on posters, such as “How can free speech on this campus create/disrupt our sense of community?” and “When has ‘free speech’ offended you on campus?”

Margaret Klawunn, the vice chancellor for student affairs, organized the event and said the chalk messages had escalated from endorsements of Donald Trump to words that “threaten” UCSB students.

“We care about finding that line that protects free speech and where it crosses over and begins to threaten and intimidate members of our community,” Klawunn said. “The messages changed from the beginning of the week when they were statements of political belief to the end of the week when they were very purposefully placed to threaten members of our community.”

At the town hall, attendees split into groups of about 30 and responded to questions on the posters, after which one representative of each group shared their discussion.

“The general consensus in our group is that there is a difference between hate speech and free speech and that we need to be cognizant to it,” said Kathy Swift, host of KCSB’s Radio Occupy. 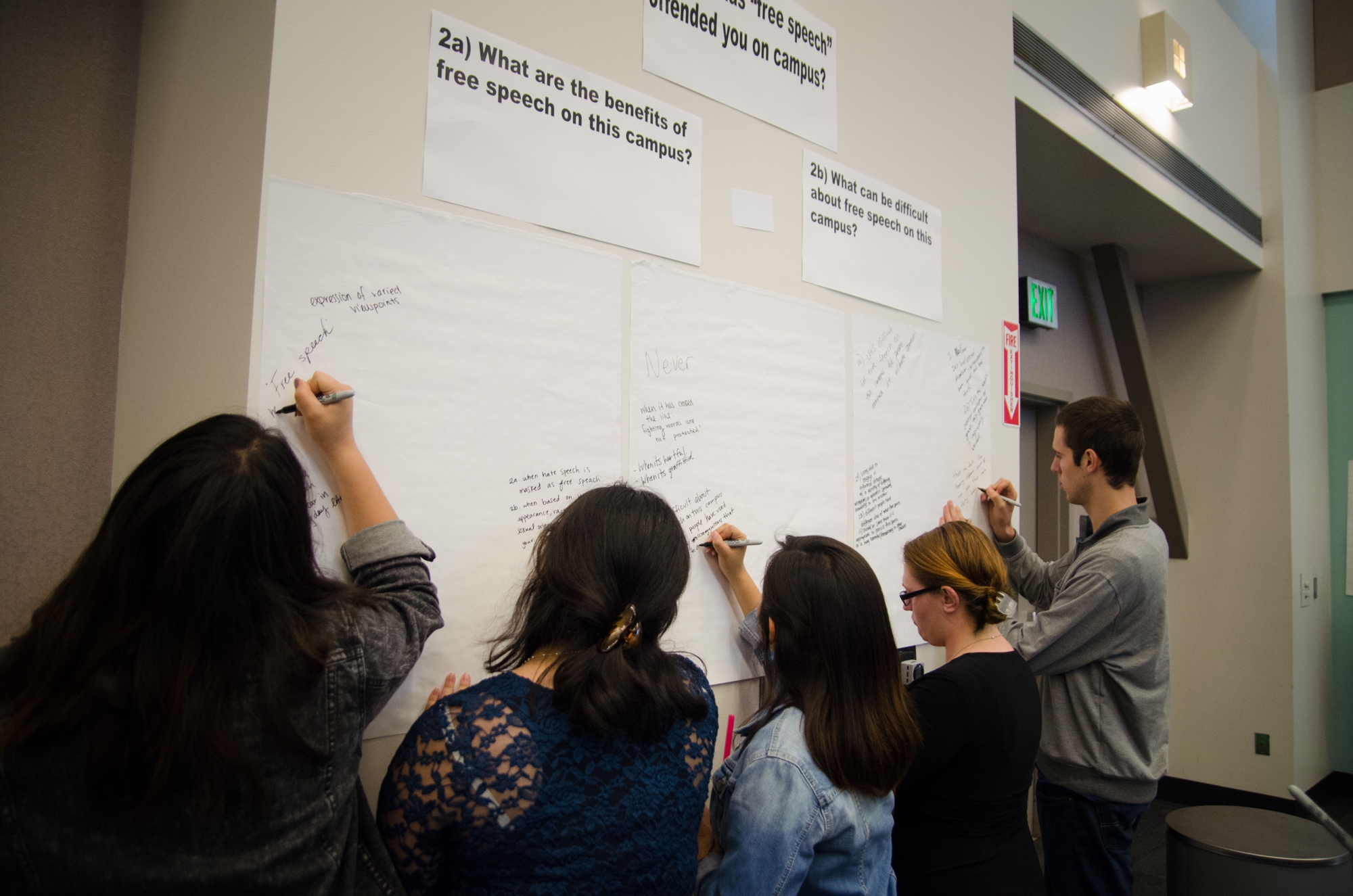 Questions at the event asked how free speech can create or disrupt a campus community. Alex Nagase / Daily Nexus

“The acts of vandalism and hate speech … were deeply disturbing and not only violated the rule of our campus but violated the core of our university,” Yang said. “Any actions that undermine our sense of community are unacceptable, unwelcome and will not to be tolerated.”

Brandon Morse, fourth-year political science major, said he thought the town hall was “productive,” and that there should be a follow-up meeting that allows students to express themselves through poetry or speeches.

“I absolutely think that town hall meetings are the correct response — we need dialogue on campus,” Morse said. “It may be able to help, now that we have a general idea, to bring it down to the individual level.”

As of Saturday, 175 current and former faculty members had signed an online petition calling on Chancellor Yang “to publicly condemn the defacing of our campus in the strongest terms possible.”

“The perpetrators must know that they are condemned, isolated and marginalized by the university as an institution from the highest level,” the petition reads.

Morse called this part of the petition “unfortunate.”

“It’s a sad irony in the fact that [faculty] are creating a marginalized and isolated community, and as opposed to reaching out to them … they were treating the people in the same manner that they were trying to protect the community from,” Morse said. 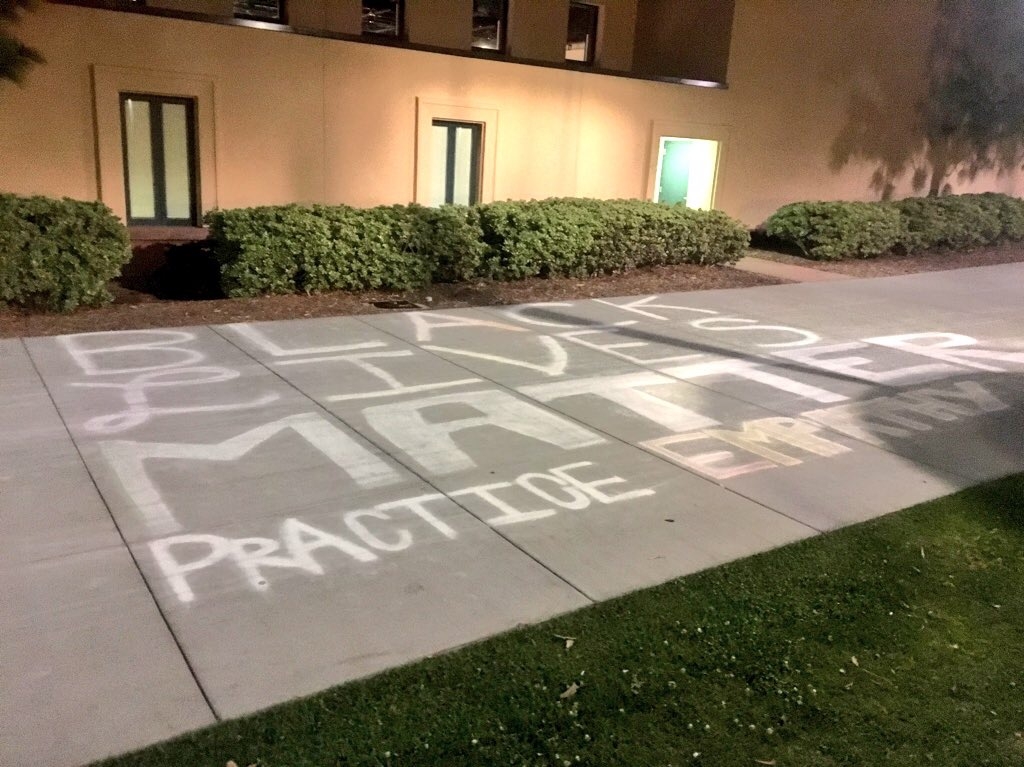 Chancellor Yang said the university would take the petition “very seriously,” adding that the town hall was not the end of the discussion.

“This is not the ending, this is just the beginning,” Yang said. “We will continue the dialogue, the discussion, the discourse and reaffirm our commitment to having a diverse campus community that fosters an inclusive, respectful and supportive environment.”

At least one campus group is organizing its own reaction. A second “Million Student March” is planned for Thursday and organizers have chosen a theme of “reclaiming” UCSB from the anonymous chalk writers.

The event description encourages students to join the march “in an effort to RECLAIM our campus after heinous, racist chalk statements targeted at many marginalized communities at UCSB.” The group says it will address “each specific chalk statement” with new “chalk walls.”

As a UCSB alum, I would like to add “Build the wall – higher!” American citizens are taxed to fund illegal aliens in our public schools (http://undoc.universityofcalifornia.edu/applying-to-uc.html). This is crazy. UC students who don’t toe the party line are condemned by 175 current and former faculty members – who are paid by all taxpayers, not just Democrats. 60’s generation Boomer profs have come full circle and are using a fake notion of “toleration” to impose compulsion on who disagree with them politically. It is ironic that a man like Dr. Yang, whose family left totalitarian China, and who came to… Read more »

Wow, you blast quite a bit there. UC is not unique in funding illegal aliens in California… our K12 system does it already. Are we in this richest country in the history of the world so tight-fisted that we want really smart illegals to turn to say, drug dealing, rather than learn engineering and design the new smart phone? `Toe the line’… well, the chalkers defaced public property. I have little sympathy for graffitiers, like you do. Frankly I forbid all political discussion in my classes… I teach physical science at UCSB. No compulsion I’m aware of at UCSB. Yang… Read more »

And who exactly do you think is going to pay for this giant wall of yours? I would suppose it better go 10-15 feet underground as well because we all know that they are capable of going under a wall too.

Does anyone have photos of anything actually racist (or anything else offensive…) actually written in chalk? I hear a lot about it, but it seems the only offensive thing written was TRUMP and BLM.

BLM triggers me. I need a safe space. NOT. ALL lives matter. Period. To suggest that only Black lives matter is inherently racist on its face and you can’t logically say otherwise. The FBI UCR says about half of all murder victims and half of all murderers in America are Black. Fact. Been that way for a long time. And no one is forcing Black Americans to kill each other. This is not a legacy of slavery or about poverty. When American Blacks wake up they’ll figure they’ve been doing worse to each other every year than all the lynchings… Read more »

“Black LIves Matter” does not mean “Only Black Lives Matter.” Rather, it means “Black Lives Matter TOO.” The movement is a response to unarmed black men being killed by the police. That is what needs to end.

You’re being very naive if you think so based on the BLM crowd’s reaction to those who attempt to say All Lives Matter.

Oh good lord. Build a bridge and get over it.

What about the fact that “Assassinate Trump” was also written? With all the hubbub about offensive chalk you’d think a direct threat against a presidential candidate would be worth a mention. If someone chalked “Assassinate Bernie” I imagine we’d hear about it, and rightfully so… but apparently the rules only apply to conservatives at this school.

There was no consensus that there is a difference between “free speech” and “hate speech.” That was the tone that they tried to set, and those of us who disagreed were silenced. This was a farce.