UCSB students and Goleta residents gathered Thursday evening in the MCC to hear a human rights activist discuss the Israeli-Palestinian conflict, a path toward peace and the Boycott, Divest and Sanction (BDS) movement.

Bassem Eid, who spent more than 30 years living in a refugee camp in East Jerusalem and founded the Palestinian Human Rights Monitoring Group, argued that the path to peace in Israel and Palestine will only come from improvement of the economic standing of Palestinians. According to Eid, this goal is crippled by the BDS movement aimed at divesting from companies allegedly profiting from occupation in the West Bank. 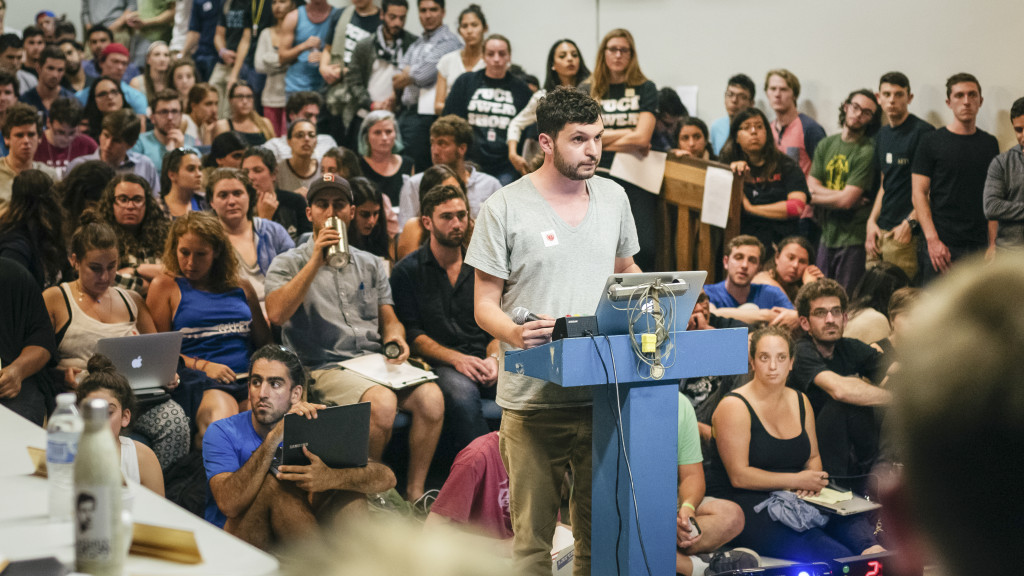 In 2015, students packed an A.S. Senate meeting, making speeches to the senators concerning the Students for Justice in Palestine’s resolution for divestment. Hari Patel/Daily Nexus

“I am a person who believes that only economic prosperity for Palestinians will be able to pave the way towards peace,” Eid said. “The BDS movement, in my opinion, has no idea the harm they are causing to the Palestinians. If I will boycott Israel tomorrow morning, how can I survive? Will BDS find me a job? Will BDS feed my children?”

Supporters of BDS and members of Students for Justice in Palestine (SJP) have criticized Eid’s stance. Audience members called him a “traitor” in February at the University of Chicago, and just days before his UCSB event, SJP and the Muslim Students Association at Cal State Long Beach protested his lecture there. At UCSB, campus security was present, but the event proceeded without incident.

Kayla Shenassa, a second-year classics major, organized Eid’s lecture without the aid of any student organization by contacting the Committee for Accuracy in Middle East Reporting in America (CAMERA), the agency overseeing his tour, after noticing Eid was speaking at UC Santa Cruz.

If I will boycott Israel tomorrow morning, how can I survive? Will BDS find me a job? Will BDS feed my children?” — Baseem Eid

“It’s important for our community and students on either side, or on no side, of this issue to hear the truth, and Bassem is one of the biggest sources of truth on this issue because of his background as a Palestinian human rights activist,” Shenassa said. “The reality is that BDS is not conducive to peace whether it’s on campus or in the Middle East.”

In addition to denouncing BDS, Eid spoke on topics ranging from his arrest by Palestinian leader Yasser Arafat in 1996 to the corruption of Mahmoud Abbas, President of the Palestinian National Authority.

Eid maintains that the only solution to the plight of Palestinians must be one that improves the economic standing of his people. He said over 92,000 Palestinian workers currently hold Israeli work permits and enter Israel to work for the companies BDS seeks to divest from.

He pointed at the closure of a SodaStream factory that BDS successfully forced to move out of the West Bank as a disaster for 1,500 Palestinian workers who lost jobs.

“The Palestinians living in the West Bank are not worried about settlements,” Eid said. “They are worried about having a job and how they will feed their families.”

When asked about the plight of Gaza, Eid said he places most of the responsibility on Hamas, the ruling government there, which the United States recognizes as a terrorist organization and Eid calls a “dictatorship.”

“I want BDS to come to the leaders of Hamas by asking why the leadership imposed three wars on the Gaza strip,” Eid said. “I think the survival of the Gazan people is the responsibility of the Hamas organization.”

SJP representatives who attended the lecture declined to comment.

When asked what BDS supporters can do to help the Palestinian people, Eid suggested investing rather than divesting.

“If the BDS will succeed to persuade Palestinian billionaires who are living abroad to invest in Gaza and the West Bank, I will look at that as a huge help,” he said.

Goleta resident Andriana Goodell said she came to learn from someone with “relevant experience” of the conflict.

“I saw it advertised in my community center and thought it was interesting that Eid lived for 33 years in Shuafat,” Goodell said. “I learned good information from a person with relevant experience toward the Palestinian and Israeli conflict.”

Eidan Shalom, a third-year psychology major, served in the Israeli Defense Forces from 2011 to 2013 and is the president and founder of Students Supporting Israel at UCSB. Although he disagreed with Eid’s call to open up Israel’s borders, he agreed with Eid’s views on BDS.
“The Palestinians need economic prosperity,” Shalom said. “When BDS thinks they are targeting Israel, in reality they are targeting Israeli businesses, which actually employ thousands of Palestinians.”

Beautifully written. Particularly loved how you included the perspectives of diverse backgrounds into your article!