In a plan recently approved by NASA, researchers from UCSB and other institutions have developed a study for a major NASA field campaign to quantify the state of the ocean carbon cycle from satellite observations. 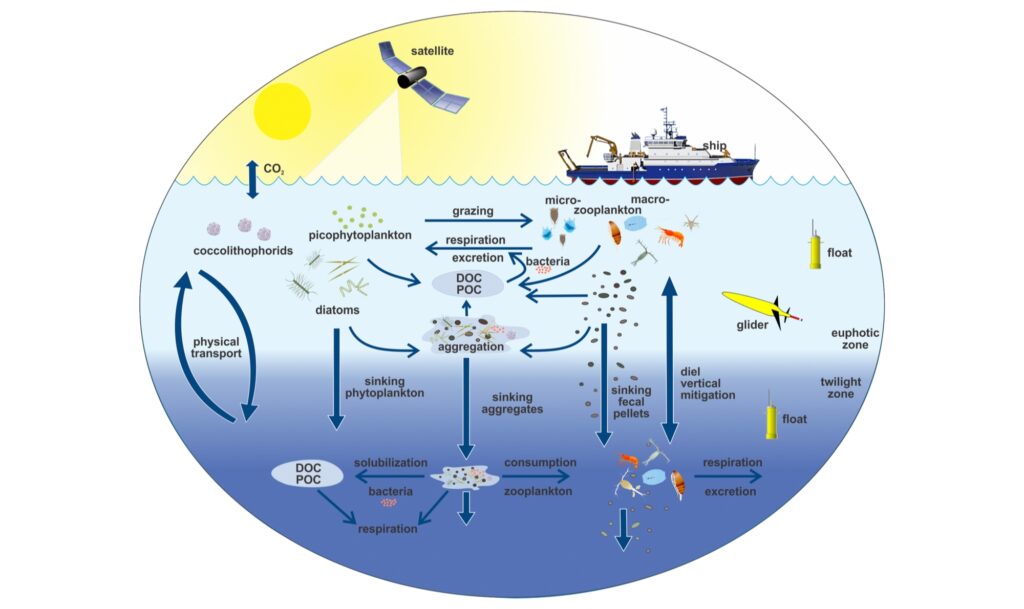 The knowledge gained through EXport Processes in the Ocean from RemoTe Sensing (E.X.P.O.R.T.S.) will help predict how future changes in the ocean’s sequestration of carbon will alter the global carbon cycle. The plan appeared in the scientific journal Frontiers in Medical Science and is described in detail on NASA’s website.

“What we’re trying to understand is the residence time of carbon in the oceans,” said David Siegel, lead author of E.X.P.O.R.T.S. and director of the Earth Research Institute at UCSB.

There are several pathways in which carbon travels within ocean food webs, which lead to signifiscant differences in the vertical transport of carbon in the ocean interior. This variability of the oceans’ ecosystems is what makes quantifying carbon difficult. Depending on how and where it is released back into the ocean can make the difference of whether it will cycle back within a few days or will become organic matter created by phytoplankton that stays in the ocean for decades.

Siegel elaborated on the difficulties of a project that deals with immense global ecosystems.

“We have to care about things phytoplankton eat, the types of phytoplankton there are, how there are many animals that migrate vertically in the ocean,” Siegel said. “And then you have all these physical processes that are very complicated.”

Siegel said E.X.P.O.R.T.S. will measure major pathways and use the data collected to compare systems.

“So the idea is to measure major pathways at the same time, at a same place, at different stages and by doing so we can compare different systems,” Siegel said.

The E.X.P.O.R.T.S. plan integrates ship, autonomous robot and satellite observations of carbon cycling processes, along with data mining of previous observations and numerical modeling, in order to improve predictive understanding of the export of global ocean primary production. E.X.P.O.R.T.S. will quantify export pathways using multi-ship field deployments, which will observe several ecosystem and carbon cycling states during a 30 to 45-day cruise. These deployments are planned to take place in the Northeast Pacific and North Atlantic oceans.

The deployments and the time needed to analyze and model the data require E.X.P.O.R.T.S. to be a five-year program. E.X.P.O.R.T.S. results will be a data set that spans the range of states of ocean carbon cycling.

While E.X.P.O.R.T.S. is designed to be a five-year program, Siegel said the planning process was also time-intensive.

“I got funded four years ago,” Siegel said. “It was very small grant from NASA to help start the planning process and organize the team, but I’ve been working on problems like this for a long time and realize that I’m working on different parts but never all together at the same time, and that’s really the problem.”

The overall objective for E.X.P.O.R.T.S. is to ensure the success of these future satellite mission goals by establishing relationships between remotely sensed signals and carbon cycle processes. Through a process-oriented approach, E.X.P.O.R.T.S. will bring new insights into ocean carbon cycling that will maximize its societal relevance and be a key component in understanding Earth as an integrated system.

While it is approved by NASA, Siegel said E.X.P.O.R.T.S. may not begin field deployments until 2017.

“We’re at the stage where NASA has formed a Science Definition Team, and our job is to figure out how much it’ll actually cost, and now we’re down at the point of trying to rationalize what is needed,” Siegel said. “Our goal is to then present the plan to the community in July and get it submitted by early fall, and then NASA will decide if it’s able to fund it.”