Gov. Jerry Brown signed a bill into law Monday that will raise the state minimum wage from $10 to $15 an hour by 2022. 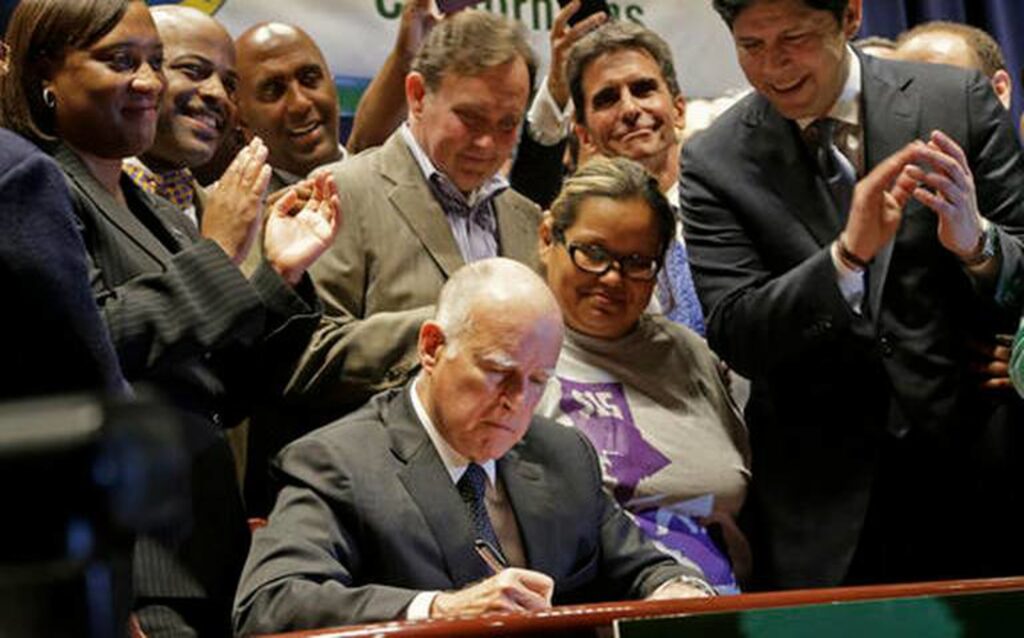 Photo courtesy of David Siders of The Sacremento Bee

Critics of the bill argue it will hurt small businesses and force employers to fire workers. Achadjian, who is also a congressional candidate for California’s 24th district, said the wage hike will lead to an increase in unemployment rates.

“I’m all for everybody earning more money, but [workers] have to earn that,” Achadjian said.

Achadjian said the bill will discourage people from attending college and cause a rise in inflation.

“When I worked for 80 cents an hour in 1971, in college, I knew that if I wanted to get out of minimum wage I needed a higher education, so I always valued education,” Achadjian said. “With this [minimum wage bill], I’m afraid that we’re taking that incentive away.”

Achadjian criticized the staggered increase, saying the compromise was nothing more than “politics.”

“It’s politics, and that’s something that I don’t care for,” Achadjian said. “Somebody who has 26 to 30 employees will be discouraged from hiring people who are [on] their first job because of the cost of training and everything else that comes with it.”

Proponents of the bill believe the gradual yearly increase will give the economy time to adapt to the changes. Under the bill, businesses with 25 or fewer employees will have an additional year to enact each wage increase. Carbajal said this “phased-in” approach will allow businesses to adjust.

“The phased-in approach allows businesses to have a smooth adoption and transition into this wage increase because it’s not going to happen right away,” Carbajal said.

According to Williams, businesses will be able to adjust to the wage increases on a “sufficiently long” timeline.

“Increased costs of any kind require planning and adaptation for businesses large and small,” Williams said in an email. “But, I believe the phase-in timeline is sufficiently long, with an additional year of phase-in time for employers with 25 or fewer employees.”

Carbajal said he believes the bill will allow millions of California to work their way out of poverty.

“This legislation is an acknowledgement that, in California, if you work hard and you have a full-time job, you should not live in poverty,” Carbajal said in a phone interview. “This is a major step — significant legislation that will bring people out of poverty, that will allow them to sustain themselves and their families and work towards improving their quality of life.”

Gary Charness, a UCSB professor who specializes in labor economics, said economy efficiency and distribution are the two important issues with the topic of minimum wage.

From the standpoint of economic efficiency, Charness said there should never be minimum wage. In terms of distribution, however, he said a society could desire a higher minimum wage if it wishes to help its less able members.

A version of this story appeared on p. 4 of the Thursday, April 7 edition of the Daily Nexus.