The No. 65 UCSB women’s tennis team entered the month of April back in the national ITA rankings in addition to a three-match winning streak. The Gauchos were able to extend their winning stretch to four before having their string of wins snapped in a loss 4-3 loss to No. 67 Long Beach State on Saturday. 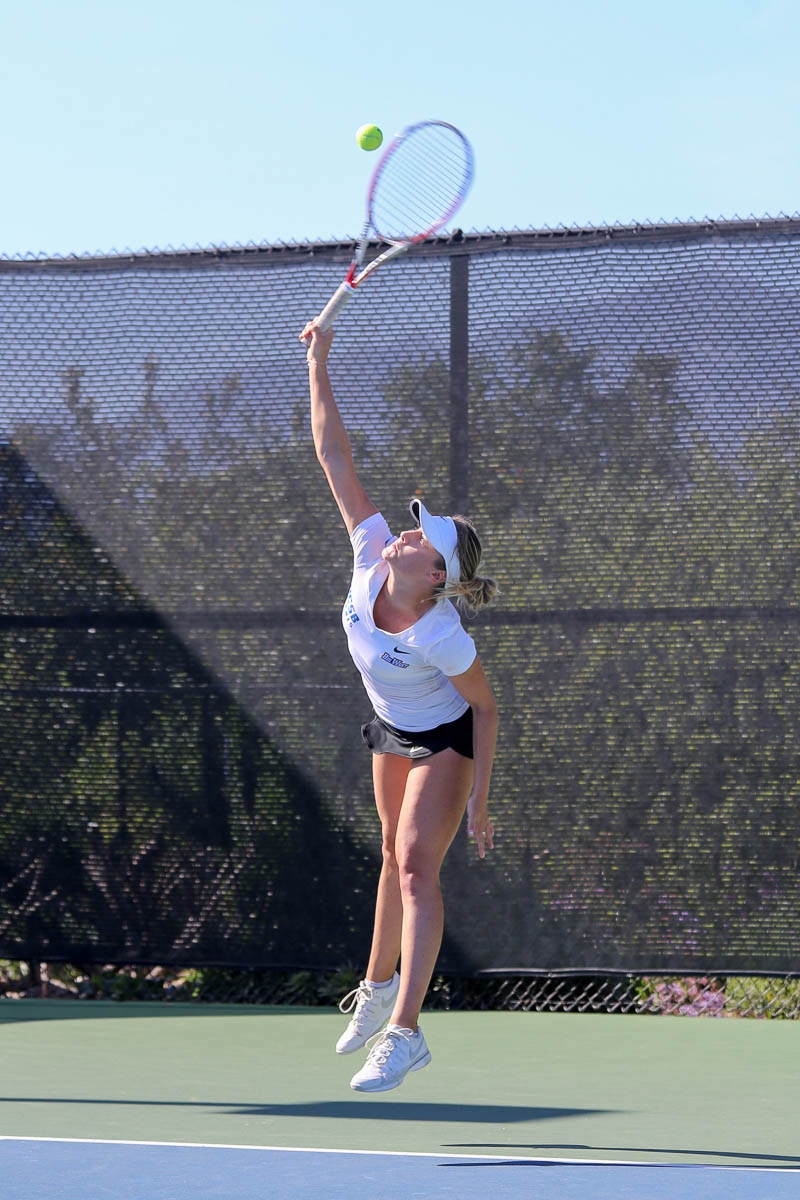 Santa Barbara fell short once again, losing to yet another ITA nationally ranked team by a score of 4-3 for the sixth time this season. Still, UCSB managed to conclude the weekend with a 2-1 record in its final home matches of the season with victories over CSUN on Friday and UC Riverside on Sunday.

Ending its season with four away matches, UCSB is currently 11-7 overall and 4-1 in Big West play. Northridge remained winless on the road after enduring a 4-3 loss on Friday and is 8-10 overall, 2-3 in the conference. The only team to defeat UCSB this weekend, No. 67 LBSU improved to 13-4 overall and 6-0 in the Big West. Unable to capture its first conference win, UCR sits at 3-11 overall, 0-5 in the Big West.

Santa Barbara faced off against a tough CSU Northridge team that entered with a record of 8-9 beating fellow Big West Conference rivals UC Riverside and Cal Poly. The matadors were 2-2 in the Big West prior to Friday’s match. UCSB did not have an easy time against CSUN but still managed to win 4-3.

“Northridge is a tricky team to play,” Head Coach Simon Thibodeau said. “(CSUN) came in playing pretty well and we started slow but we were able to win the match.”

Santa Barbara started the month losing the opening doubles point for the first time since dropping to Oregon in Hawaii. No. 16 in doubles Sophomore Palina Dubavets and junior Stefani Stojic lost to juniors Mickey Hsu and Kristen Poei 6-4.

Sophomores Lou Adler and Amanda Atanasson managed to give the Gauchos a fighting chance by beating sophomore Kiryang Kim and junior Mari Taslagyan 6-2.

With the doubles point up for grabs, it was between junior Melissa Baker and freshman Stephanie Yamada on one side of the net against the Matadors’ junior Vivian Lin and freshman Skyla Alcon.

In true Big West fashion, the drama did not end there, but rather continued in a back and forth contest. The doubles match gave a glimpse of how the contest would conclude with a narrow ending.

Moreover, the game ended in favor for Northridge as it squeaked by with the win to grant CSUN its first point of the day, winning by a score of 7-6.

However, the remaining games went back and forth similar to the last doubles set. The first singles match between Stefani Stojic and Kirsten Poei on court three went fairly quickly as Stojic only conceded one point in two sets, winning 6-1, 6-0.

The next singles match also went in favor of the Gauchos as Dubavets defeated Vivian Lin on court two by scores of 6-2 and 6-1 to hand the Gauchos a 2-1 lead.

In response, Northridge’s Alcon managed to tie the match by overcoming UCSB’s Atanasson 6-4 in the first set and 6-2 in the second. With the score knotted at 2-2, the next two events went resulted in a point for each team, leaving the match to be decided by the two players on court six.

Juniors Jaimee Gilbertson and Mari Taslagyan went all three sets in an intense contest between the then top three teams in the conference.

Taslagyan won the first set 7-5 but dropped the next two sets. The second finished 7-6(5) and the third 6-4 all in favor of Gilbertson who extended her single’s dual record to 7-6. The match ended with a 4-3 win for Santa Barbara.

Saturday morning’s match between reigning Big West Conference champion, No. 67 Long Beach State, and runner up UCSB was a lot closer than any of last year’s encounters were.

Last season when the two teams met, the 49ers won 6-1 and beat the Gauchos in the conference final 4-1. This time around, the 49ers managed to edge UCSB for a 4-3 victory.

“We wanted to win, even though we lost, we feel pretty good on our chances against Long Beach,” Thibodeau said. “We didn’t play well in doubles, lost at five and six. [But], we can surely win next time if we play better at doubles and better at the five and six we can do pretty well. It was still positive to see we lost 4-3. We still have lots of room to improve and this is the closest we have been to beating them”.

UCSB started slow once again, losing the doubles point quickly having two of the three matches end with a score of 6-2 while the match in which Dubavets and Stojic participated in went unfinished.

However, as soon as the singles portion of the match commenced, Santa Barbara demonstrated its capability to compete against the 49ers as the Gauchos won three straight to go up 3-1 against Long Beach State.

But, the 49ers proved why they were the defending champs as they went on to win three straight in singles to clinch a 4-3 win.

After another narrow defeat, the Gauchos had one day to turnaround and face one of the weaker Big West Conference opponents in UC Riverside. Head coach Simon Thibodeau managed to rest a few of his starters as the Gauchos were still able to defeat the Highlanders 7-0.

This weekend helped to foreshadow the competitive race set to take place in the Big West standings as Long Beach State remain atop of the conference with its 6-0 standing and UCSB is at third with its 4-1 record behind another conference undefeated in CSU Fullerton. Fullerton has yet to face Long Beach or Santa Barbara this season.