This past weekend the No. 49 UC Santa Barbara Men’s Tennis team opened up Big West Conference play in the dual meet season. In their two matches, the Gauchos managed to take both wins forfeiting only one point in both. Friday morning, Santa Barbara topped Hawaii 7-0 and followed Sunday afternoon with a 6-1 defeat of UC Irvine. 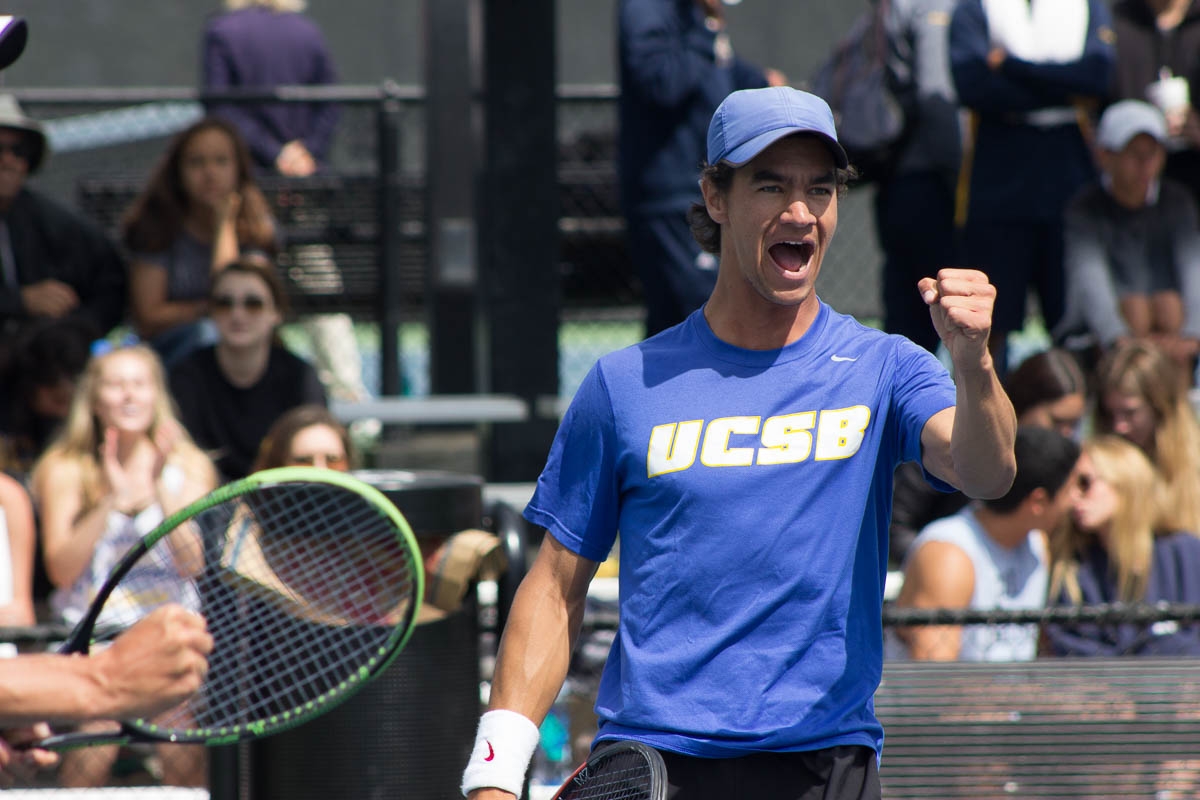 “[Head Coach Marty Davis] has really gotten our team to understand that it doesn’t matter who you are playing against,” senior Nathan Eshmade said. “We just have to come out every week and stick to what we know and play our own game. It has definitely worked for us.”

With these two wins the Gauchos improve to 12-6 overall and 2-0 in Big West Conference play.

The Gauchos played with absolute perfection against a struggling Rainbow Warriors team as they swept doubles play and did not lose a set in the singles round. Santa Barbara opened the match grabbing the doubles point with a 6-1 win on court two from the freshmen duo of Nicolas Moreno de Alboran and Anders Holm and a 6-3 win on court three from junior Morgan Mays and senior Andrew Riminton. The Gauchos would head to singles play with a 1-0 lead.

In the singles round, the lower courts were the first to finish for Santa Barbara as the team took its first two wins on courts six and five. On six, junior Teague Hamilton defeated his opponent dropping just one game with a final score of 6-1, 6-0. On five, sophomore Cody Rakela put up the exact same dominant score to put the Gauchos up 3-0, just one point away from clinching the match.

Mays would be the one to seal the win for Santa Barbara with a 7-5, 6-0 win on court three and the rest of the Gauchos would follow on the upper courts with sweeping victories to give the team an overall 7-0 outing and its first conference win. With this Santa Barbara improved to 11-6 overall and 1-0 in conference.

The match with UC Irvine on Sunday was built to be a close contest as the Anteaters owned the conference’s best record at 13-5, and entered Santa Barbara on a seven-match win streak. Despite Irvine’s momentum, the Gauchos would again grab a one sided win, defeating the Eaters 6-1.

Santa Barbara opened up the match in a similar fashion taking the doubles point and a 1-0 lead over Irvine. Court two was the first to finish as Moreno de Alboran and Holm grabbed their second win of the weekend with a 6-4 score. On court one, the nation’s No. 34 doubles team of seniors Nathan Eshmade and Miles Seemann sealed the point with a 6-2 win of their own.

Singles play was nearly perfect again as the Gauchos won five of the six matches. Hamilton and Rakela found themselves off first once more winning 6-2, 6-2 and 6-4, 6-2, respectively. Moreno de Alboran would seal the match at 4-0 with a 6-2, 6-3 win on court two to give the Gauchos their third straight win.

The next match would go to the Anteaters on court four and due to Santa Barbara clinching with a fourth point, the final two singles bouts would be decided in an eight-point third set. Mays played on court two and grinded his way to a 6-3, 5-7, 12-10 win. Eshmade played in a thriller of a match on court one and came out on top, defeating a ranked opponent in No. 78 Sebastian Heim 6-2, 3-6, 17-15.

“Today I was really able to play to my strengths and I was able to get a good win,” Eshmade said. “I really wanted to keep going and play for the fans who all came out see some great tennis and I’m glad we got to finish it out.”

The Gauchos will take their three-match win streak into the weekend as they will host UNLV in a make-up match from early March. The match is set to start this Saturday at 2pm at the Rec Cen Courts.