The Daily Nexus
News
Horses Kept on Sideline During Deltopia
April 3, 2016 at 9:30 am by Nicholas Bogel-Burroughs 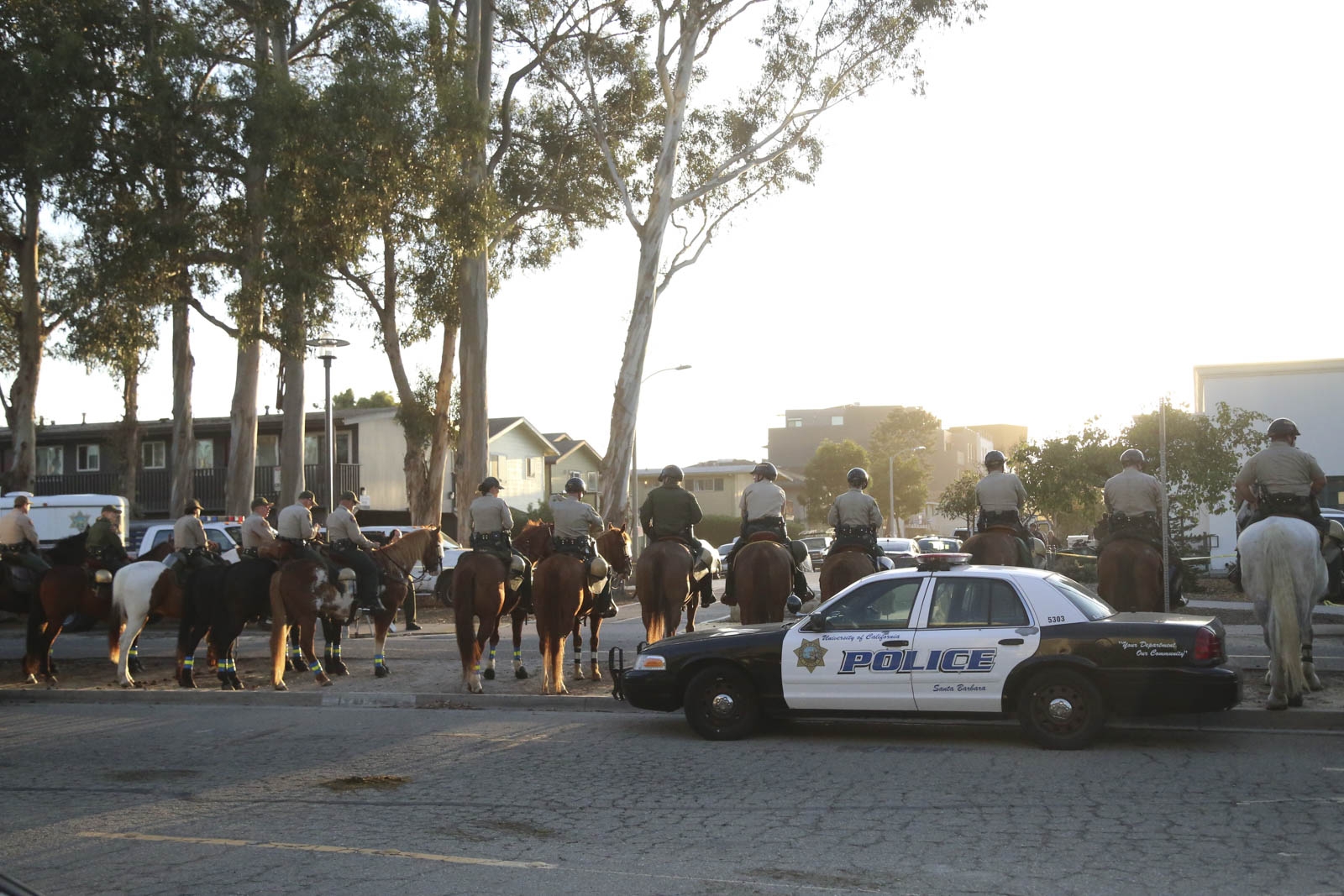 Due to an effort by members of UCSB Associated Students, horses spent most of Deltopia on Isla Vista’s periphery Saturday, only passing through twice to exercise and munch on grass. Dustin Harris / Daily Nexus

In contrast to years past, police horses spent much of Deltopia in portable trailers on the edge of Isla Vista Saturday after some students criticized their use as “intimidating.”

Instead of joining the party, mounted units from Santa Barbara, Ventura and Santa Monica counties stood quietly by the I.V. Foot Patrol substation after A.S. Senator Ashcon Minoiefar spearheaded an effort to limit their use during Deltopia weekend.

Minoiefar, a third-year history of public policy major, and Duncan Calvert, a fourth-year history and political science double major and public safety liaison of the A.S. Public Safety Commission, met with I.V. Foot Patrol Lt. Rob Plastino early in March to propose that he scale back the use of horses during Deltopia 2016.

“When I talked to Plastino … he said the horses are more for show than anything, that they’re really not necessary for crowd control,” Minoiefar said. 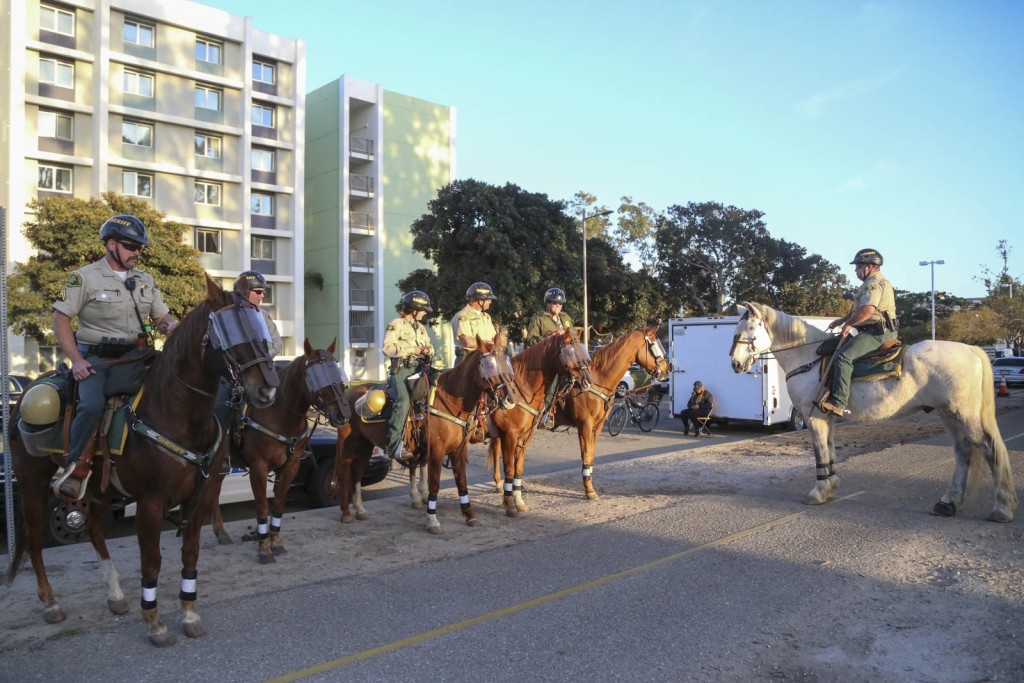 Minoiefar wrote on Facebook that many I.V. residents feel the horses’ presence can “make IV feel like a police state,” adding that Lt. Plastino also thought the horses were “probably unneeded and [unnecessarily aggressive].”

Lt. Plastino agreed with Minoiefar that the horses were only needed in emergencies and, on a relatively quiet Deltopia Saturday, the horses largely stayed in their mobile trailers.

Twice, police rode the horses around I.V. “just to get some exercise,” Santa Barbara Sheriff’s spokesperson Kelly Hoover said. The horses would only be used for crowd control in an emergency situation, according to Hoover.

That moment did not come, and on Saturday afternoon, about 15 horses could be seen calmly munching grass in Sea Lookout Park (commonly known to students as Dogshit Park) on Del Playa Drive.

In an email to Minoiefar dated March 4, Lt. Plastino said the horses “will most likely be positioned on Ocean Road, but will not ride down Del Playa [Drive]” during Deltopia.

The mounted units’ two laps around I.V. prompted The Tab UCSB to write that police had “gone back on [their] word” by using horses, but Minoiefar said he spoke to Lt. Plastino who assured him that the mounted units were just trying to keep the horses from remaining idle. 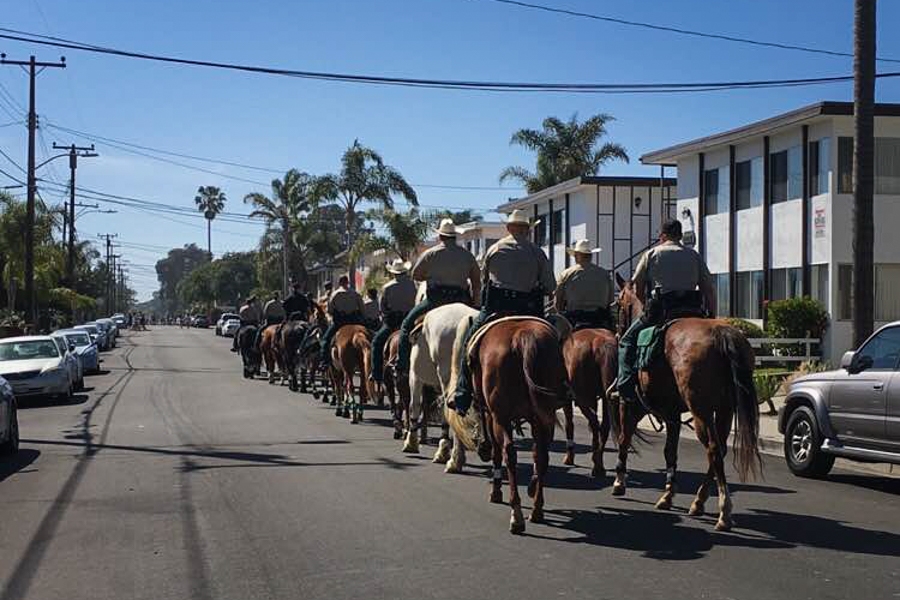 “They’re just taking the horses to feed them some grass,” Minoiefar said, adding that Lt. Plastino told him the horses had been acting “a little anxious.”

A member of the Mounted Enforcement Unit from the Ventura County Sheriff’s Office said the horses would only be patrolling the “exterior” of I.V. to “let people know we’re here” and would not trot down Del Playa Drive unless specifically ordered.

Jade Burchett, a first-year communication major, was walking by the IVFP substation Saturday evening as police prepared to take the horses for a second walk around I.V.

“They’re cute, but it’s a little much, and there’s horseshit everywhere, which you smell on the way to class,” Burchett said. “I don’t think it’s worth the time for anyone — or the horses.”

Still, it was clear the horses had stayed almost completely out of sight, and Burchett was surprised to learn that they had been on the edge of I.V. since before noon.

Great piece Nicholas Bogel-Burroughs…focus on shitting…nice…How about focusing on how much effort Law Enforcement makes to keep students attending Deltopia safe?? I bet your parents are glad they’re spend good money on your education…