The Daily Nexus
News
Adopt-A-Block Volunteers Clean up I.V. After Deltopia
April 3, 2016 at 10:07 am by Dahyana Barraza 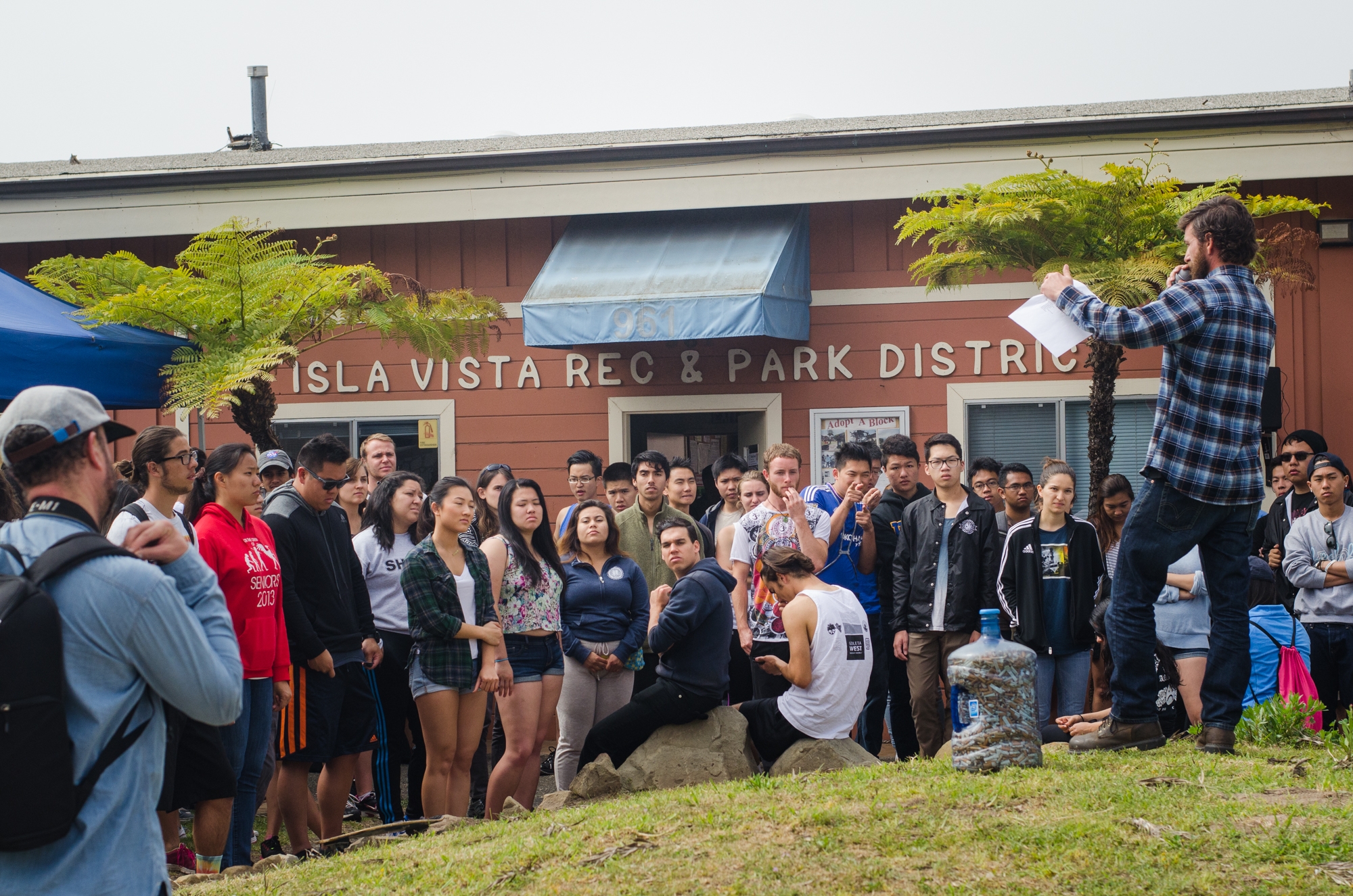 A group of about 250 volunteers cleaned up Isla Vista on Sunday after Deltopia Weekend. Will Tran / Daily Nexus

A crowd of Adopt-A-Block volunteers faced a foggy afternoon on Sunday, gathering to clean up the remnants of a Deltopia much quieter than previous years. 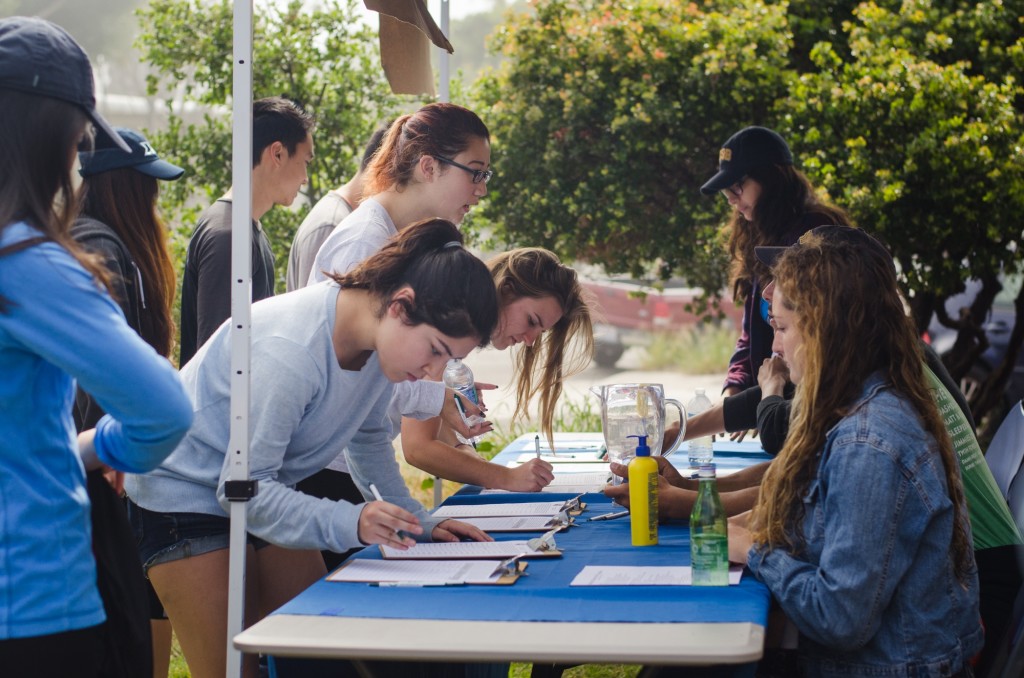 Although Deltopia has been noted as one of Isla Vista’s biggest festivals, it has calmed down in recent years, resulting in a less devastating aftermath of pollution in the small, oceanside area. This year, an approximate 250 volunteers assembled at 11 a.m. to clean up I.V. — a considerably smaller group than the 349 volunteers in 2015 and 367 in 2014, but just as successful as in previous years.

Most volunteers tend to be I.V. residents who want to keep their neighborhood clean, according to Adam Portè, Adopt-A-Block supervisor. “Unfortunately, a lot of the times the people that were partying here on Saturday night are gone by Sunday morning,” said Portè, who was pleased to see the work completed in two hours after posting pictures online of the 66 block of Del Playa. 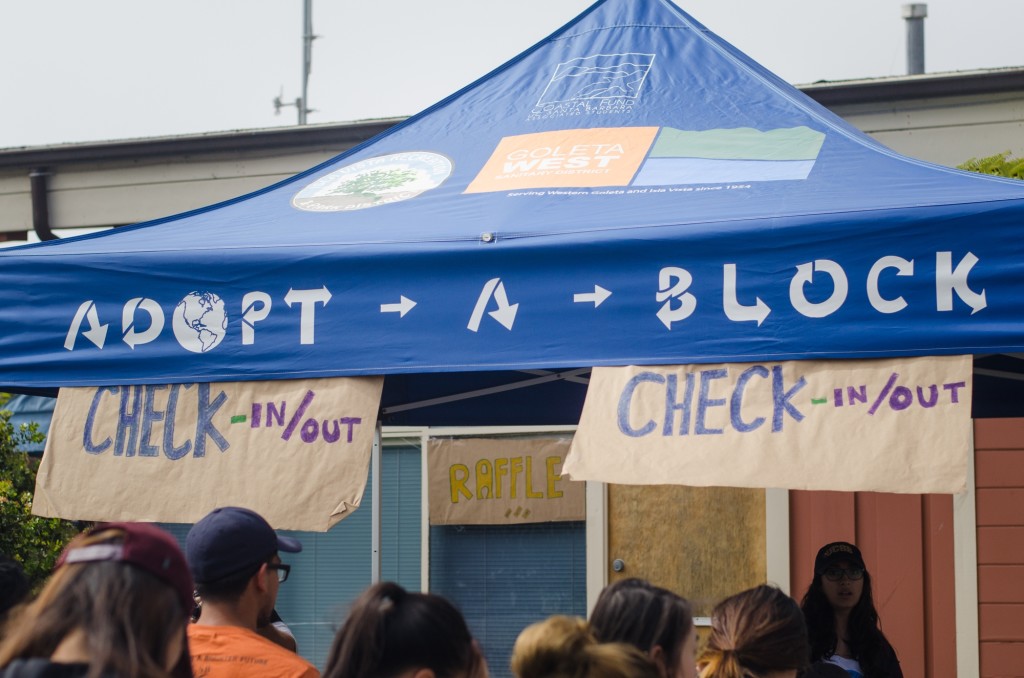 According to Portè, more volunteers participated in 2014 and 2015 because they were “disgusted” by the neighborhood after waking up in the morning.

“There was a lot of negative media coverage on that Deltopia event because of those riots and … when they came out of their houses that morning, they were just disgusted.” Portè said. “They saw my volunteers out there and they took it upon themselves to bring their own trash bags, their own brooms.” 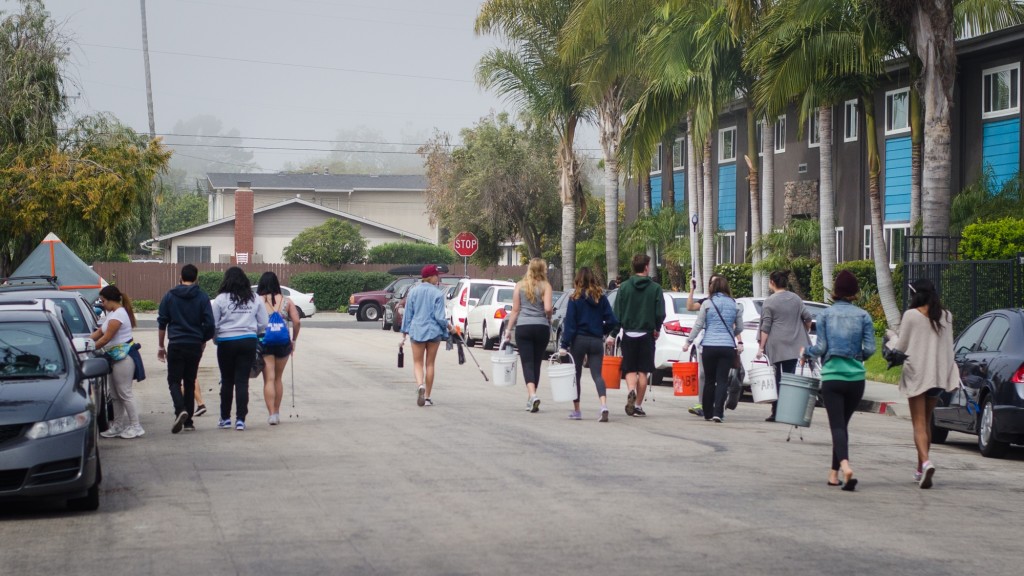 Ylse De Los Santos, a fourth-year sociology major, said the process was “hectic” because she had worried about group turnout and cleanup routes, but the afternoon was a success. 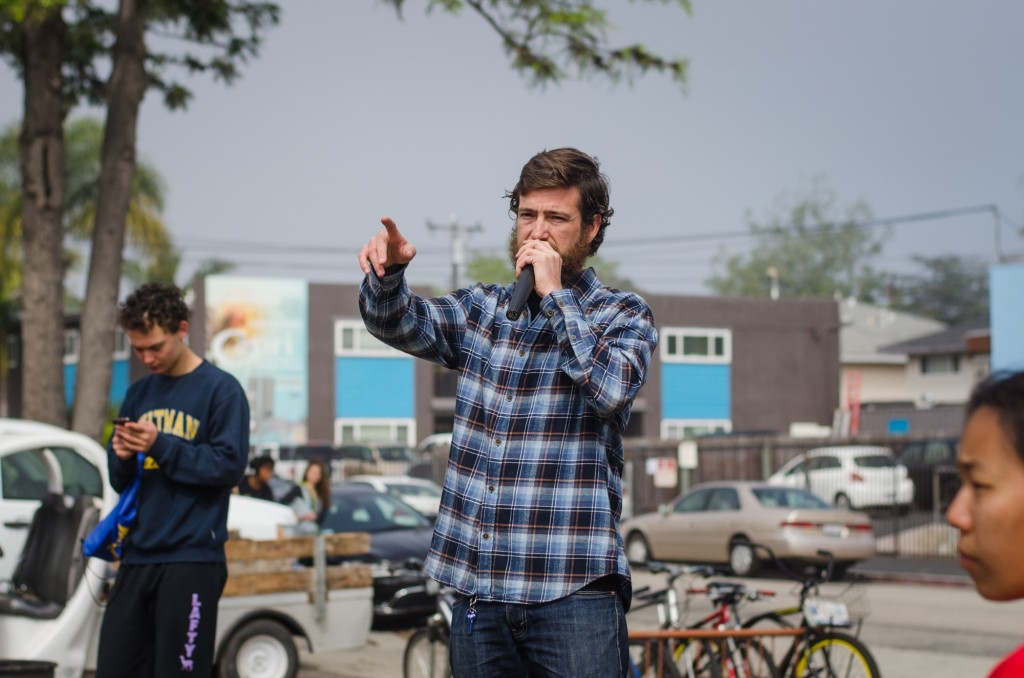 “Usually when we hit around 10 a.m. we would see a lot of early-comers … but this time we didn’t see that. We had people coming right at 11 instead,” De Los Santos said. “Del Playa was the first spot that we sent people to because … we definitely don’t want any of that trash going into the ocean.”

Pizza My Heart, Woodstock’s Pizza, Silvergreen’s, Monster Energy, Hempwise and Blenders in the Grass sponsored the event, and handed out prizes and snacks to the volunteers.

“I always want to thank the sponsors sincerely because they’re the ones who help us draw in these volunteers with food and drinks,” Portè said. 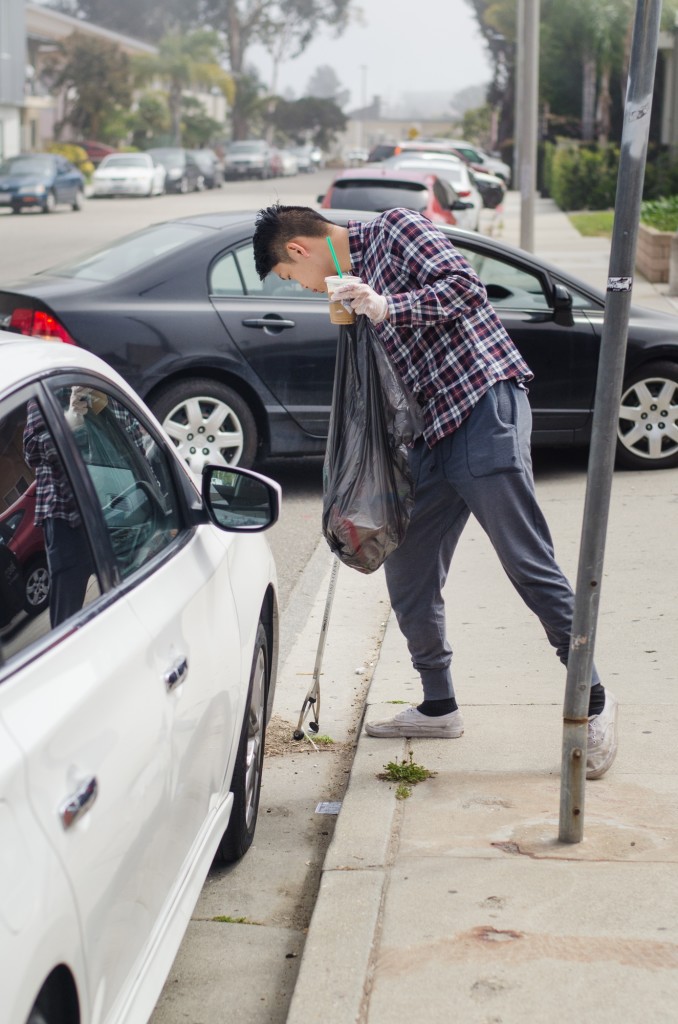 “We can all come together and clean up the aftermath.” Oakley said. “Especially since there’s no organized system that does it, so they really depend on us as students to go around to clean up the community. We take ownership of where we live and beautify it.” 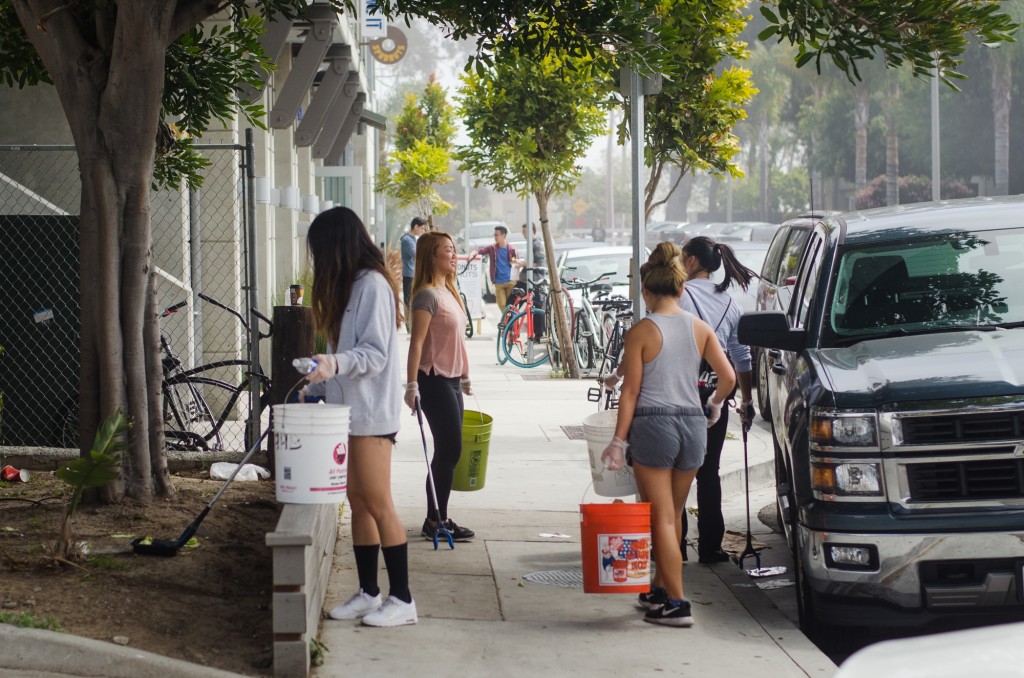 “They manage to make trash clean up really fun — everyone just coming together and having a good time.” Fry said. “We all feel really accomplished right now, and happy. It’s been really nice to come out and see this kind of work in our community.” 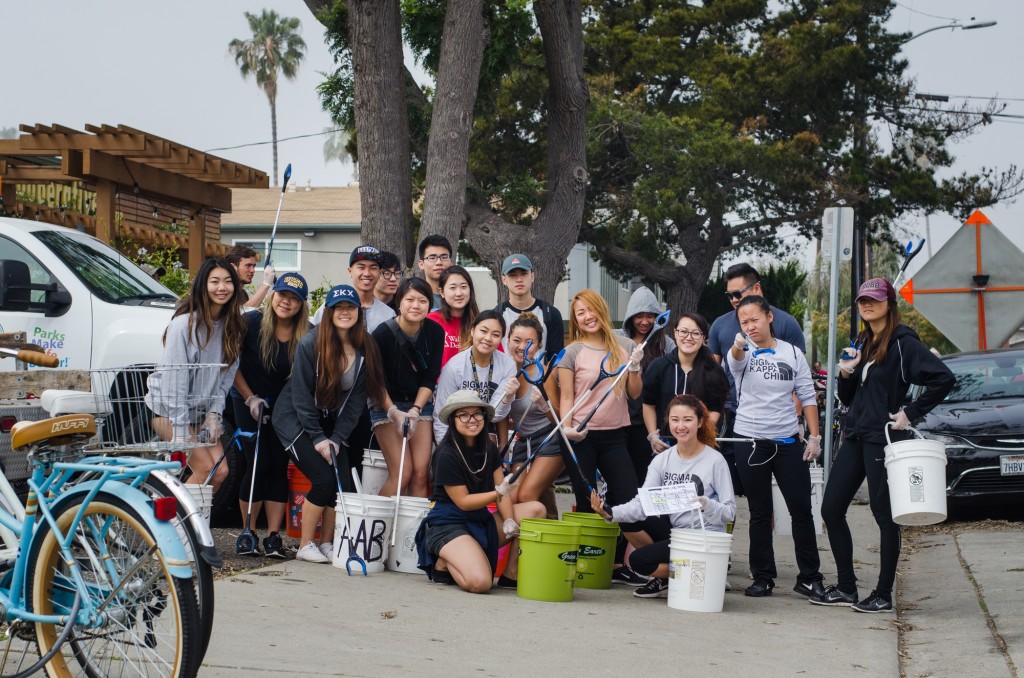