The Daily Nexus
Music
Warming Up With Grouplove
April 1, 2016 at 5:00 am by Tracy Smith 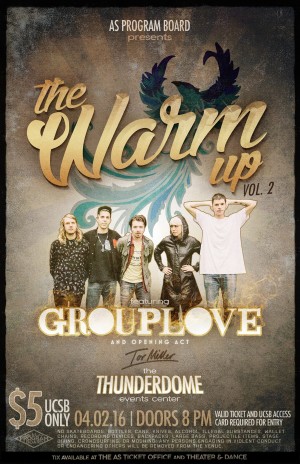 When people hear the name Grouplove, they envision an endless loop of paint-splattered, angst-filled teens singing “Tongue Tied” as loudly as humanly possible. While this idea may seem appealing to some people, it diminishes the reality of what the band is actually capable of. No matter what Grouplove is depicted to be, they have a song for everyone, and this Saturday at the Thunderdome they will grace each UCSB student with the immense artistry that lies in every one of their songs.

Grouplove formed with its five members in 2009 purely out of passion, and these friends were unaware of just how big they were going to become. After playing their first show mid-2010, they proceeded to go on tour with bands like Foster the People, The Joy Formidable, and Florence + the Machine. After just two short years of being together, the name Grouplove was on everyone’s radar, and before they knew it they were performing explosive sets at large festivals like Glastonbury, Coachella, Outside Lands and Lollapalooza to name a few.

In the midst of these defining performances, the band managed to release both their self-titled EP, Grouplove, and their debut album, Never Trust a Happy Song, all in the same year. Never Trust a Happy Song features their hit single, “Tongue Tied,” and if that song alone is not reason enough to see them live, both the debut album and EP feature blissful, captivating sounds. The melodies tend to be contradictory in the way they appear when compared to the meaning behind the songs, but that is what separates Grouplove from other, more ordinary acts. There is no attempt to sound like anyone else, nor is there an attempt to market happiness by pretending to be happy. The concept that someone can listen to them and battle a multitude of feelings that have nothing to do with happiness but still feel overwhelmed by the forthcoming perception of joy is what makes this band so alluring. Their live set only amps up this joyousness, with the band members playfully and energetically hopping around to hype up their ecstatic audience.

Although this is not the way that many people pictured spending their first weekend back from Spring Break, this alternative makes other options seem inferior. People will have the opportunity to experience a luminous night filled with brilliant music, silvery vocals and heightened energy from the comfort of the Thunderdome. Although the band is currently on what they are calling a “tone quest,” once they do release new music it will not be long before they are back on the road. At least UCSB students will be able to say they saw them before they took the world by storm.