A second half surge from the UCSB men’s basketball team clinched its ticket to the semifinals of the Vegas 16 Tournament Monday afternoon as it defeated Northern Illinois University by a final score of 70-63.

The Gauchos are now 4-1 during the month of March and have won 10 out of their last 11 games. With this win, Santa Barbara improves to an overall record of 19-13. The Huskies ended their year with a record of 21-13. 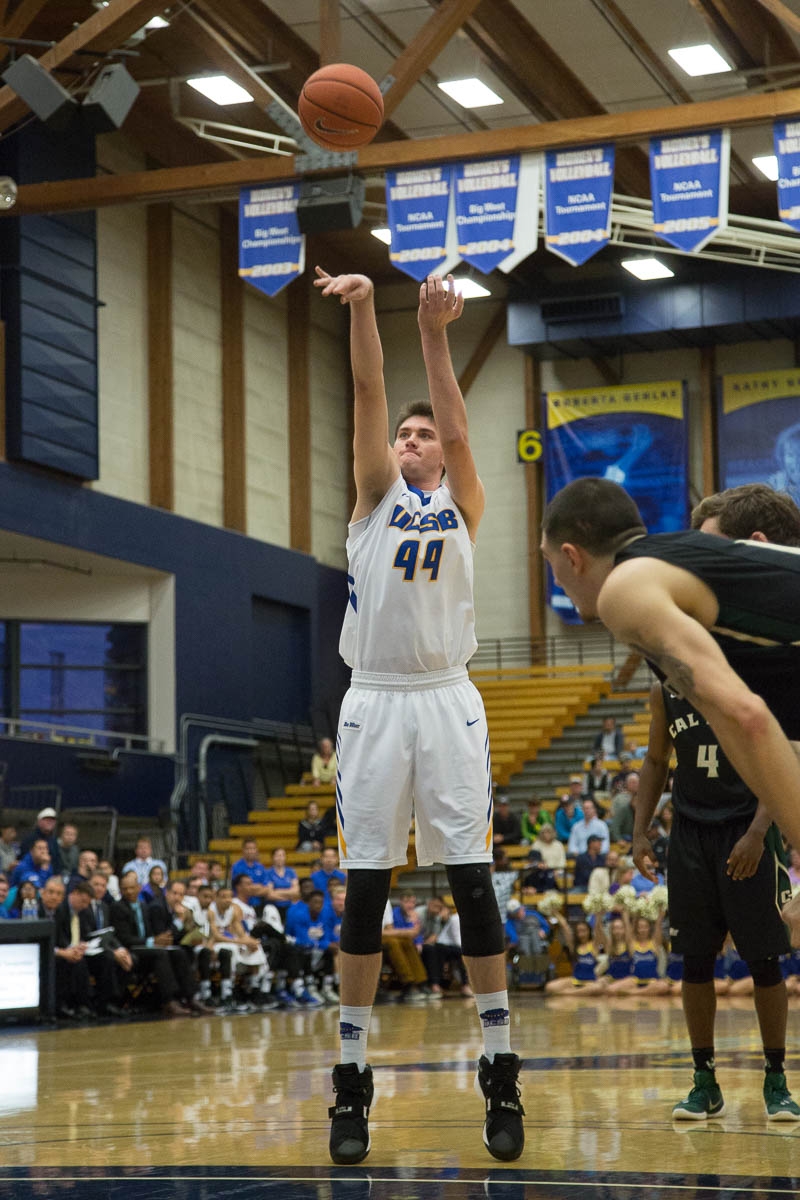 A highly intense battle throughout the game’s entirety, neither team was able to break away for a large lead.

However, Gabe Vincent kept UCSB in contention in the game’s early stages as the sophomore guard scored 11 of his team’s first 13 points, including three makes from beyond the arc at the 13:57 mark of the first half.

Despite a hot start from Vincent, strong drives to the rim and early free throw trips to the line proved to be critical in keeping NIU in the game. The Huskies drew ten fouls on the Gauchos in the first half hitting 12-17 from the charity stripe.

NIU’s junior guard Aaric Armstead led the way with 12 points and went a perfect 4-4 behind the free throw line. Grabbing down ten rebounds and finishing with a double-double, the third year from Chicago, Illinois failed to register a bucket in the second half.

Following two converted free throws from freshman forward Jarriese Blackmon to put UCSB on top 19-18, the Huskies compiled a 25-9 run reclaiming the lead and ended the first half with a halftime lead of 43-32.

A turnover from guard Eric Childress opened up the second half and led to a go-ahead layup from Travon Baker. This gave Northern Illinois its largest lead at 13 points.

Yet, despite the sloppy start, the Gauchos regrouped and responded with a run of their own.

Off the Baker layup, Eric Childress went coast-to-coast and finished with a finger roll which trimmed NIU’s lead back to 11.

Santa Barbara continued to chip away at the Huskies’ lead as Vincent connected on a free-throw line extended jumper followed by a three-point make from senior Michael Bryson, his second of the night. UCSB regained some momentum and cut the deficit to single-digits, 39-45, with 17:15 left in the game.

The Huskies continued to battle however in the 11th minute as 6’10 forward Marin Maric knocked down a pair of free throws and intercepted a pass from freshman Maxwell Kupchak.

Maric then found his teammate Marshon Wilson for an easy transition layup maintaining a six-point lead at 52-46. Wilson was a spark for the Huskies’ second unit as the freshman shot 6-11 from the field and finished with 14 points.

With NIU up six points approaching nine minutes to play, the Gauchos assembled their most important run yet.

Santa Barbara pulled away in the final minutes, producing a 13-3 run to end the game.

Senior Sam Beeler played an effective part in this, racking up 10 of his total 16 points with eight minutes to go including a 15-foot baseline jumper that extended his teams lead to 63-58 with 3:26 left.

The senior concluded the game with an 8-9 shooting performance, helping UCSB seize its first postseason tournament victory since defeating the University of Houston in the first round of the 1990 NCAA Tournament.

The Gauchos will face Old Dominion in the semifinal round of the Vegas 16 Classic.

Coming off a 75-59 over Tennessee Tech, the Monarchs are on a streak of their own having won eight of their last nine matchups. Senior guards Aaron Bacote and Trey Freeman combined for a total of 34 points in ODU’s win Monday night.

Tip off for tonight’s matchup will begin at 6 p.m. in the Mandalay Bay Center. The game will also be broadcasted live on CBS Sports Network.

Thanks Bryson for a great 4 years

Time for Williams to go!