The Daily Nexus
Sports
UCSB Picks Up Solid Wins In Final Reg. Season Tourney
March 28, 2016 at 5:01 am by Antonia Bird

The UCSB softball team fought hard in its final tournament of the season, the Gaucho Classic II, and was rewarded with a winning record of 3-2 once all the games were played. 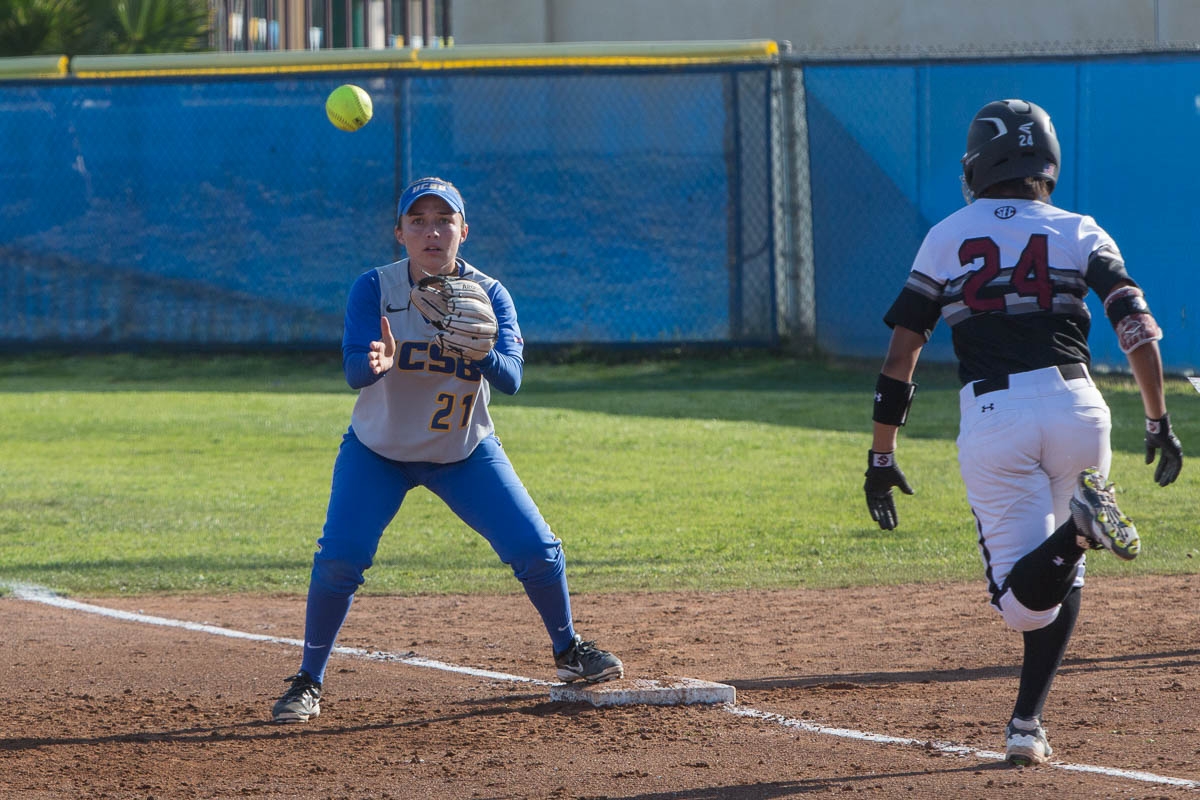 As the ball flies toward her, Arianna Palomares looks to make an out at first base. Dustin Harris/Daily Nexus

The Gauchos started its weekend on Thursday with a 5-3 win against CSU Bakersfield, but then lost to Seattle by a score of 2-0. On Friday, UCSB picked up two wins beating Santa Clara 5-4 and then Seattle 6-3. It closed out the weekend with a heartbreaking 4-2 loss to San Diego on Saturday.

Following the Classic, Santa Barbara regains an above .500 record standing at 17-16 overall. CSU Bakersfield sits at 8-19 overall while Seattle holds a 14-19 overall record after both teams went 2-3 this past weekend.

Santa Clara continues to struggle this season as it dropped to 5-28 on the season after an 0-4 weekend. San Diego was the only team to improve its overall record which is now 14-21 after a 4-1 mark at the tournament.

Friday was UCSB’s best day with back to back wins against both Santa Clara and Seattle. In an eight inning game against Santa Clara, the Gauchos found themselves down 4-0 after five innings of play.

Santa Barbara finally woke up in the sixth inning scoring three runs to cut the deficit to one at 4-3. UCSB was able to hold Santa Clara scoreless for the next two innings, while scoring one run in each to earn the 5-4 win.

Sophomore Lena Mayor and freshman Veronika Gulvin split the pitching duties against Santa Clara with four innings each and both earning four strikeouts in the process. Gulvin secured the win, now 5-8 on the season, after giving up only one run on two hits.

After struggling through a 2-0 loss against Seattle the day before, the Gauchos got back on the winning track when it beat Seattle 6-3. UCSB out hit Seattle 13-6 with three Gauchos contributing two hits each.

The Gauchos started the game by scoring two runs right off the bat, however, Seattle responded in the second with two runs of its own to make it 2-2. Johnston responded to Seattle’s two-run comeback with a single to right field, knocking in Clark and junior outfielder Stacy Cavazos to make the score 4-2.

Seattle would add one run in the third inning to make the score 4-3, but two more runs by Santa Barbara in the fourth inning put the game away as it secured its 6-3 victory.

Clark and freshman infielder Sierra Altmeyer were the only two Gauchos to put numbers on the board. Senior infielder Arianna Palomares’ sacrifice fly resulted in an RBI that brought home Clark, while Altmeyer contributed with a homer to center field.

Although the final loss was a tough one, the weekend was a solid one for UCSB to build of off. It showed some great signs of a team that is ready to do well in conference play which begins Saturday.

The Gauchos will stay at home to play a non-conference game on Tuesday, March 29 against Loyola Marymount at 2:00 pm at Campus Diamond.