The Daily Nexus
Sports
Gauchos Win Series Over Trojans But Winning Streak is Snapped
March 28, 2016 at 4:06 pm by Jorge Mercado

Although the UCSB baseball team’s winning streak was stopped at nine after a tough loss to USC on Saturday, the Gauchos still won another series against a quality opponent after beating the Trojans on Friday and Saturday at home. 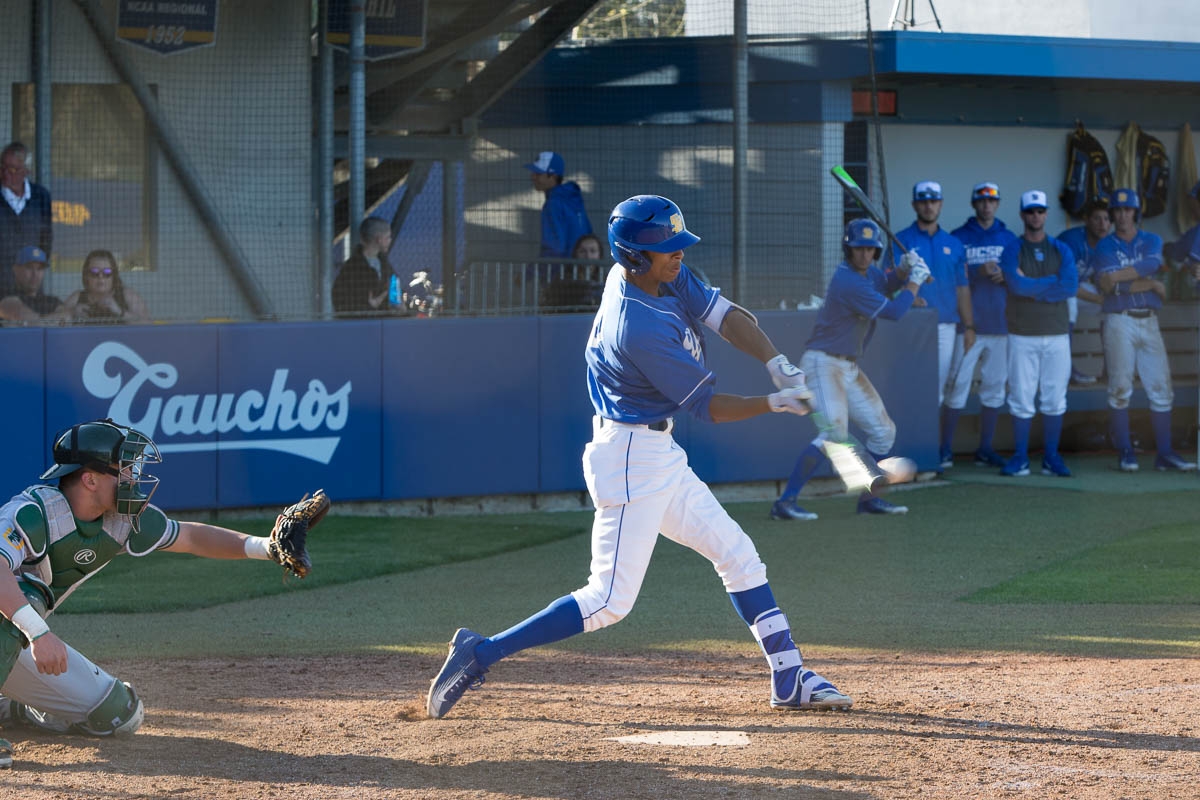 After connecting with the ball, Tevin Mitchell sends it flying into left field. Dustin Harris/Daily Nexus

The 2-1 weekend against USC left the Gauchos with a still solid 18-4 overall record including a good 13-1 home record. The Trojans drop to a .500 record after the weekend standing at 11-11 overall with a 2-1 conference record.

After two home wins the nights before, UCSB traveled to USC on Saturday to face them in the final match of the three-game series.

Before the game began, it boasted a 2-2 record away from Uyesaka Stadium, however, the Trojans solid hitting dropped Santa Barbara to below .500 away from home thanks to two home runs from its captain.

The Gauchos took a 1-0 lead after the first inning thanks to redshirt sophomore out fielder Josh Adams ground-out RBI. They added one run to their lead in the top of the third inning to make the score 2-0.

In the bottom of the third frame the Trojans woke up as they rallied a four-run inning, due in large part to senior out fielder Timmy Robinson’s three-run homer, to take the lead at 4-2.

They then added one run in the fifth as well as the sixth, thanks to another Robinson home run, to extend the lead to 6-2.

UCSB tried to respond scoring two runs in the seventh after redshirt junior out fielder Andrew Calica’s two-RBI triple but it would not be enough as it eventually fell to the Trojans 9-5. The loss snapped the previous nine-game winning streak Santa Barbara was on.

Pitchers Joe Record, a sophomore redshirt, and Chris Clements, a sophomore, both struggled in the game. Record (3-2) picked up the loss after allowing five runs on seven hits in four innings while Clements allowed four runs on five hits in 1.1 innings pitched.

Before the tough loss that snapped their streak, the Gauchos extended it to nine after another home victory. Solid pitching was the key in this game as the team of Noah Davis and Kyle Nelson held the Trojans to two runs.

USC began the scoring in this game after senior David Oppenheim hit an RBI double down the left field line to take the early 1-0 lead. Its lead was extended to 2-0 in the third after an error by the Gauchos.

UCSB began its comeback in the bottom of the fourth frame when Adams hit a two-run double to tie the game at 2-2. It then took the lead in the fifth inning after an RBI single by sophomore DH Austin Bush which brought Calica home.

The Gauchos added one run in both the sixth and eighth inning thanks to freshman Michael McAdoo’s RBI fielder’s choice and redshirt sophomore J.J. Muno’s RBI triple respectively.

Davis (2-0), a freshman, pitched a solid game allowing one earned run on four hits and struck out four batters on six innings pitched earning him the victory.

Nelson also continued his excellent season picking up his second save after pitching three innings and allowing three hits and no runs. The sophomore has only allowed one run the entire season.

To begin the three-game series, Santa Barbara came into the match-up looking to avenge the loss that knocked them out of the regionals last year. Coming in hot, off two previous weekend sweeps, it was ready to get some sort of revenge.

UCSB came out swinging and put away USC early. It out hit USC 12-6 and scored 10 runs while holding USC to one.

The Gauchos began the scoring putting three runs on the board in the bottom of the second inning courtesy of one Trojan error and a two-run homer by Adams, his fourth of the year.

They added two more runs in the fourth inning courtesy of Calica’s RBI single and a balk committed by the pitcher led to senior Ryan Clark scoring making the score 5-0.

USC added one run in the fifth inning but it was not enough as UCSB proceeded to score five runs over the next two innings to secure the 10-1 victory. It was the sixth time it scored 10 or more runs in a game.

Clark had a solid game going 3-4 (.750) with one RBI and two runs scored. Another notable hitter was junior utility Billy Fredrick who went 2-4 (.500) with one run scored and one RBI.

Junior pitcher Shane Bieber (4-1) picked up his fourth win of the season after going seven innings and allowing only one run on five hits while registering two strikeouts.

The big lead allowed coach Checketts to throw in freshman pitcher Kevin Chandler to get some solid playing time. The right-hander pitched two full innings, almost as much as he pitched in his previous four games combined, and allowed one hit, no runs while striking out two batters.

The weekend was another solid one for the UCSB baseball team. It won another series and although it’s winning streak was stopped, there is no doubt that the team is having a great season thus far.

However, it will be important to see how Santa Barbara bounces back after a loss. Also the team will be away from home for the next seven games so it will be interesting to see how that could possibly affect the team.

UCSB’s next game is Tuesday, March 29 against Pepperdine at 3 p.m at Eddy D. Field Stadium.