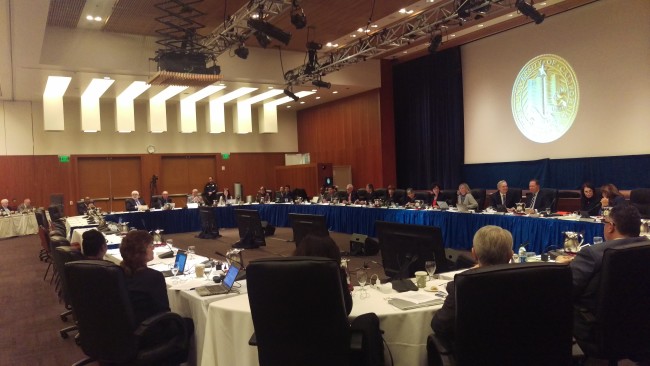 The UC Regents unanimously approved a working group’s Statement of Principles Against Intolerance on Wednesday, amending the definition of discriminatory behavior for University of California campuses.

More than a 100 UC-affiliated staff, students and professors were present at the meeting, speaking during public comment to address personal implications of the policy. First drafted in September, the statement invoked a flurry of debate due to its initial goal of addressing reports of anti-Semitism. UC members with ties to Jewish and Palestinian communities were centered in the discourse, and those who did not identify with the conflict claimed the statement focused too narrowly on a single prejudice.

The working group also faced opposition from groups who believed the statement was a violation of free speech. Defending the document on Wednesday, Student Regent Avi Oved said the statement “unequivocally embraces freedom of speech” with the inclusion of language that states First Amendment principles as “paramount” to the application of the policy.

Representatives from the Afrikan Black Coalition spoke during public forum to condemn the UC’s investments in private prisons, and questioned the treatment of black students on UC campuses in light of the anti-discriminatory policy. Several students broke into chants of “Black Lives Matter,” questioning why the Regents would not extend public comment to allow for more discussion of black student well-being.  The Regents suggested attendance at the second public comment session on Thursday and spoke in closing remarks regarding the status of the document.

In addressing the specific treatment of anti-Semitic sentiment, many Jewish activists have called for a stricter definition of discrimination. Rabbi Evan Goodman, Santa Barbara Hillel executive director, was among those who pushed to include anti-Zionism, an ideology that rejects a Jewish state in Israel, as a form of anti-Semitism in the statement.

The principles are prefaced with a “contextual statement” that acknowledges a connection between anti-Semitism and anti-Zionism, but the Regents did not choose adopt the stricter definition of anti-Semitism. Instead, the statement was amended to read, “Anti-Semitism, Anti-Semitic forms of Anti-Zionism and other forms of discrimination have no place at the University of California.”

Regent Norman J. Pattiz, who suggested the amendment, is a Jewish member of the UC and acknowledged that the statement is a deeply personal issue for him. Because of the constant evolution of the university, Pattiz said the Regents must vigilantly adapt policy and addressed the responsibilities of the UC chancellors, among whom UCSB Chancellor Henry T. Yang was present.

The Regents voted to approve the amended statement, and will finalize their decision at the second session of the Regents Meeting on Thursay.

With students at UCSB, and other UC campuses, working to inhibit free speech, is it any wonder that I slam down the phone, when I am called to give a donation?

To paraphrase Tom Lehrer… I’ve become aware that some people are intolerant of others, and I HATE THEM.