Despite a team-high 22 points from senior Michael Bryson, a 24-3 run opening the second half helped the University of Hawaii to defeat the UCSB men’s basketball team by a final score of 88-76 in the Semifinals Round of the Big West Conference Tournament. 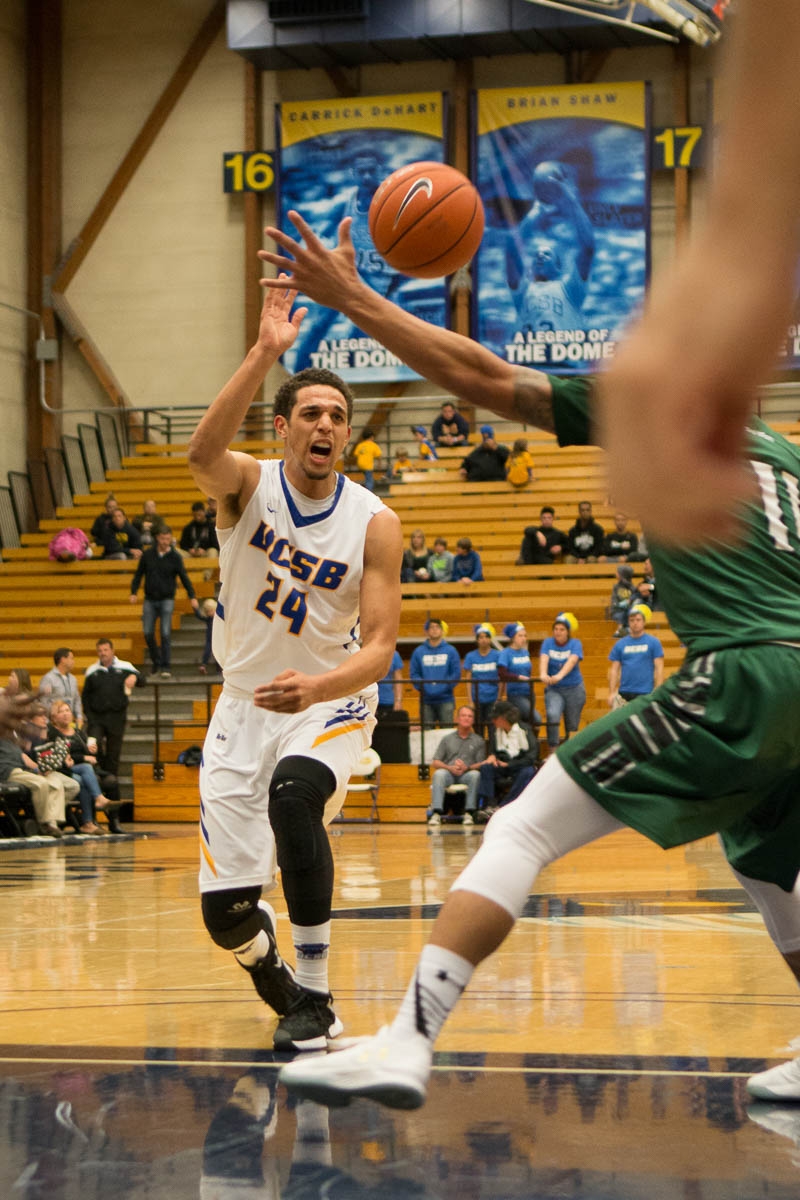 Friday’s loss snapped Santa Barbara’s nine-game winning streak, the second longest streak in program history. The Gauchos end their year with an overall record of 18-13 and 11-5 in the Big West. The Rainbow Warriors improved to 26-5, advancing to the Big West Championship where they will face third seeded Long Beach State.

It was a quick start for Hawaii, grabbing the lead early behind the play of center Stefan Jankovic. The newly crowned Big West Player of the Year connected on four of his first five shots, including two early threes, which handed Hawaii a 14-9 lead.

The Mizzou-transfer finished with 24 in points and seven rebounds in 31 minutes of play.

The Warriors managed to extend their lead to 10 points as senior Aaron Valdez scored six straight points starting with a dunk assisted by forward Sai Tummala with 8:47 to go in the first. The third-year guard tallied his third double-double of the season finishing with 19 points and ten boards. This was also Valdez’s third straight game with 18 points or more.

Following a 27-17 outpour by Hawaii, Santa Barbara responded with a run of its own.

Guard Gabe Vincent helped turn things around scoring seven points in the final four minutes of the first period. The sophomore answered a Jankovich three with a make form beyond the arc, helping trim UCSB’s deficit to one at 30-29.

Vincent then took a strong drive to the rim and gave the Gauchos their first lead since the 15 minute mark of the game at 31-30. The Stockton, CA native shot 46.7 percent from the floor for 17 points. Santa Barbara finished 9-2 in conference play when Vincent shoots above 40 percent, both losses coming to the Rainbow Warriors.

While UCSB only trailed by three heading into the break, the Gauchos were unable to halt Hawaii’s 21-3 run ignited by senior guard Roderick Bobbitt.

Connecting on three straight three-pointers to open up the second half, Bobbitt scored 12 of his total 21 points in the final 20 minutes of play helping Hawaii maintain its lead. The Oakland point guard contributed distributing the ball as well tallying four of his five assists in the second period and grabbing at total of six rebounds.

A big margin of difference lied in Hawaii’s field goal percentage and trips to the line. The Warriors shot 52 percent from the floor as well as hitting 27-37 free throws. Santa Barbara, a team who has shown consistency at the line, finished 16-27 from the free throw line. The Gauchos also took 10 more shots than Hawaii, going 26-60 from the floor, but finished with 43.3 field goal percentage.

Alex Hart gave a much needed boost off the bench for UCSB. The sophomore forward finished with a career-high 13 points, shooting a perfect 3-3 from three-point range. Eric Childress also played a role on the defensive end. The junior guard finished with a career-high six steals, four of which came in the first half including three-straight steals with six minutes to go.

However, the efforts of both players would not be enough to prevent the Rainbow Warriors from securing their 88-76 victory. Hawaii will attempt to win the conference championship in hopes of earning its first NCAA Tournament bid since 2002.