It was another encouraging series of games for the UCSB softball team this weekend at the Stacy Winsberg Invitational. Stellar performances by several Gaucho players contributed to the team’s 4-1 finish to the weekend, highlighted by Veronika Gulvin’s no-hitter in Friday’s opening game against Charleston Southern.

Remarkably, it was the second no-hitter in three games for the surging Gauchos, which have finished their last two tournaments with identical 4-1 records and now possess an overall record of 12-8. 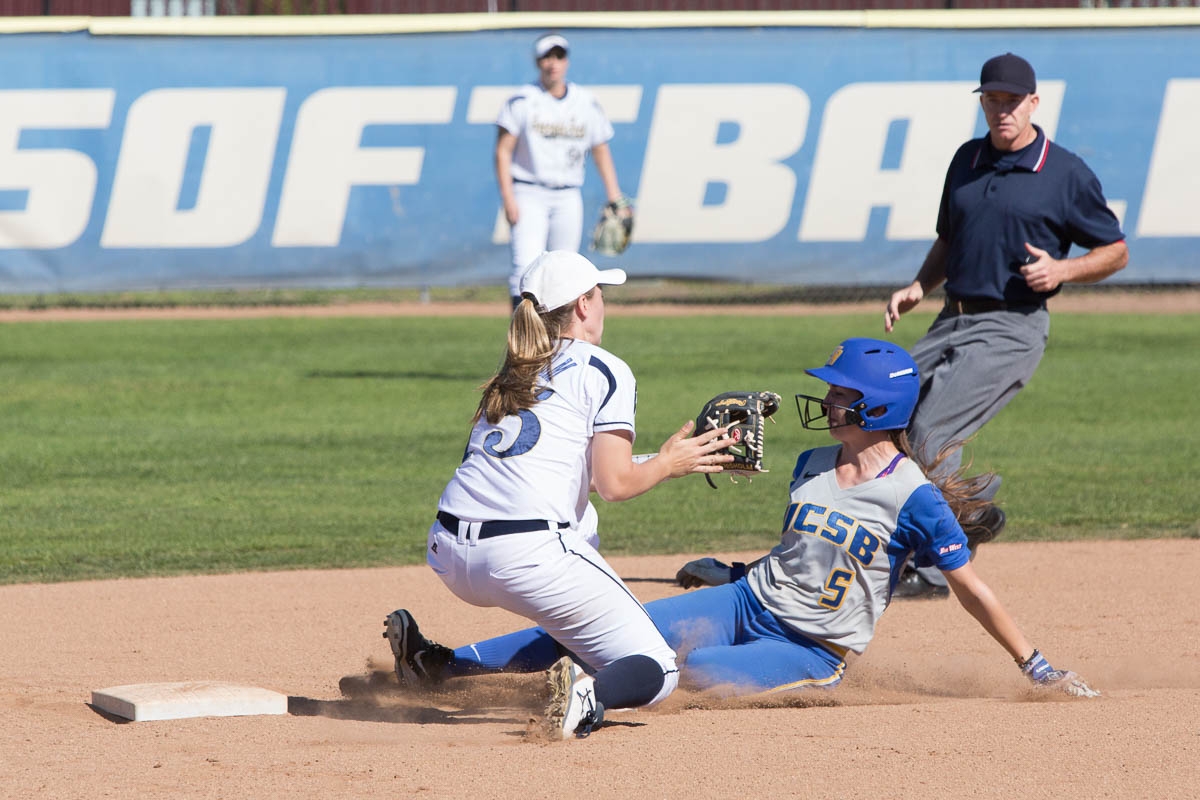 Santa Barbara set the tone this weekend in its opening game against Charleston Southern, able to get off to a strong start in both pitching and batting. As if Gulvin’s five no-hit innings weren’t enough, the Gauchos scored nine runs on six hits all in the fourth inning to secure a 9-0 victory.

Junior infielder Emily Brucelas complemented Gulvin’s success with an outstanding performance at the plate, knocking in four of the Gauchos nine runs. Brucelas went 3 for 3 on the day with two home runs, two runs scored, and four RBI’s.

Coming off its win against Charleston Friday morning, UCSB faced a very tough matchup against UCLA in its afternoon game.

The Gauchos got off to a quick start in the first inning when junior outfielder Kristen Clark singled to third base, eventually scoring on a ringing double to leftfield by senior Arianna Palomores.

Sophomore outfielder Jessica Johnston followed with an RBI single into right field. Up 2-0 in the first with nobody out, the Gauchos failed to score more in the inning, and didn’t score again for the rest of the game.

Eventually, the Gauchos lost their lead in the third when UCLA scored three runs on three hits highlighted by infielder Kylee Perez’s double which helped to bring in two runs to give UCLA a 3-2 lead.

The three hits in the third inning were the only hits in the game for UCLA, but it was enough to edge out the Gauchos for the win. Ashley Ludlow took the loss for the Gauchos, pitching six innings, giving up the three runs while striking out five and walking seven.

In the game against CSU Bakersfield, the Gauchos had another impressive performance in their 7-4 win over the Roadrunners. The game started out slow for the Gauchos as they were down by one until the fourth inning.

However, UCSB manage to turn things around offensively as it came back to score a total of six runs. Brucelas was on fire as she sparked the six-run rally with a home run to left field. Freshman infielder Sierra Altmeyer finished up with a single to left field, scoring Palomores and Clark for the last two runs in the inning.

Moreover, UCSB’s pitching staff did a solid job holding down Bakersfield’s lineup. Gulvin pitched through the fifth inning, giving up three runs and striking out three. Santa Barbara’s go-to senior pitcher Ashley Ludlow provided some necessary relief as she pitched the last two innings, giving up one run and striking out four.

The Gauchos will travel to Long Beach next weekend to participate in the Louisville Slugger Invitational.