The Daily Nexus
Sports
Gauchos Soar in 2nd Half to Defeat UCR 81-55, Host Cal Poly Saturday for Senior Day
March 4, 2016 at 6:00 am by Elliot Thornton

Thirty points off the bench and a collective effort on both ends of the floor helped the UCSB men’s basketball team to power through UC Riverside Thursday night by a final score of 81-55.

“Everyone is contributing when they have an opportunity and that’s who we have to be,” Head Coach Bob Williams said. “We have to keep the game simple, play hard, concentrate on the defensive end, and be opportunistic on offense. We’re doing this at a much higher level now than we were a month ago.” 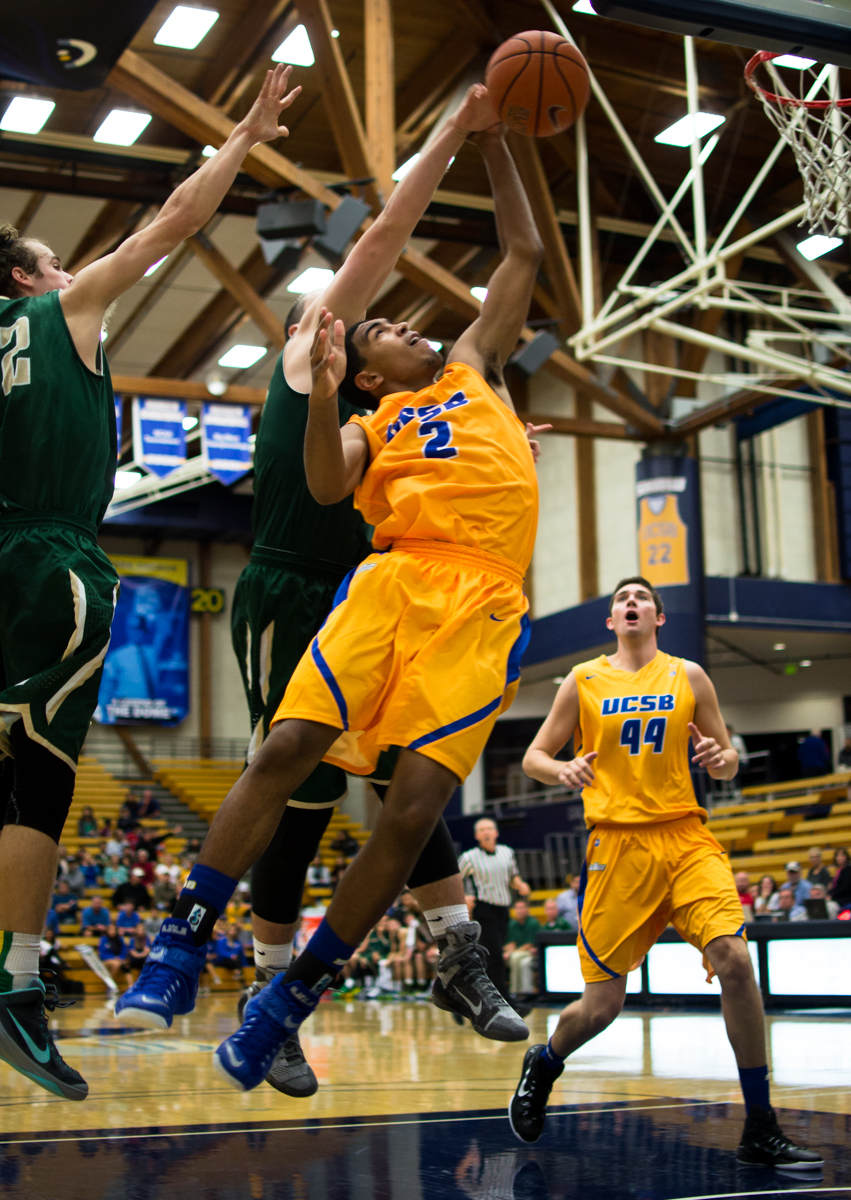 The Gauchos, 16-12 overall and 10-5 in conference, now hold the longest conference win streak in program history after earning their seventh-straight Big West victory.

Riverside, who has dropped three of its last four games since facing UCSB on Feb. 18, dropped to 14-17 overall and 5-10 in the Big West. The Highlanders are in a three-way tie for fifth-place between UC Davis and Cal State Northridge.

Santa Barbara converted on three of its first four possessions, opening the game with a 6-0 run. Riverside Head Coach Dennis Cutts quickly called a timeout, benching his starting lineup for a fresh five.

The Gauchos capitalized on the Highlander’s second-man rotation, jumping out to a 14-4 lead. Freshman forward Jarriesse Blackmon scored five of his career-high nine points in the first five minutes of the game, taking a pass from guard Gabe Vincent and connecting from three with 17:29 to go.

“I was nervous [taking the starting job], but I also understand that I have to be ready when my name is called,” said Blackmon. “I was fortunate enough to have it called in the beginning of the game and bring that same type of energy I had starting the season.”

Blackmon has started three-straight games for the Gauchos.

Following a 14-4 run dealt by the Gauchos, Riverside battled its way back. Freshman center Menno Dijkstra made his presence known in the paint. The 7’0” footer tallied in all 10 of his points in the first half going a perfect 5-5 from the floor.

Junior guard Gentrey Thomas also scored all 10 of his points in the first period including a nifty finger roll which put the score at 35-38 with 1:39 remaining prior to halftime.

After an even first half, the Gauchos came out with a sense of urgency moving out to a 21-3 run. Michael Bryson took control scoring 11 of his game-high 19 points in the second half. Bryson was 4-4 from the floor in the second, including a go-ahead alley-oop from teammate T.J. Taylor which put the score at 65-45 with 8:39 to play.

The Gauchos had other weapons in support of Bryson’s performance. Seniors Taylor, Dajuan Smith, and John Green all played their part in yesterday’s win scoring 26 of Santa Barbara’s bench points. Gabe Vincent had an effective night as well adding 11 points.

“It’s hard to match up with us right now because we’re so deep,” Bryson said. “Everybody that comes in is contributing something. It’s a tough road for anyone who meets us in March.”

Green was the main catalyst off the bench scoring 14 points in 21 minutes as well as hitting a season-high four three pointers. Prior to Thursday’s match, Green came off a season-high 19-point performance in Santa Barbara’s win against Cal State Fullerton Feb. 27.

“I’ve just been trying to focus on making shots when my opportunity comes, so during the game I can put them up, follow through, and make sure it goes in,” Green said.

“The difference [in the game] was we were really good defensively in the second half,” Williams said. “Our effort night in and night out has been better. Our activity level has to stay high on the defensive end in order to be where we want to be.”

Michael Bryson, Sam Beeler, Mitch Brewe, T.J. Taylor, Dajuan Smith, and John Green will play their final home game this Saturday, March 5 as UCSB takes on rival Cal Poly. This stands as an opportunity for the seniors to leave their final imprints in a blue and gold uniform.

“[This moment] will be bittersweet,” said Green. “Senior night will be a big day for us. I just want to make sure the six seniors including myself build a legacy here and create history for ourselves.”

UCSB is currently on a four-game winning streak against Cal Poly. Tip-off between the Gauchos and Mustangs will be at 4 p.m. in the Thunderdome. An honorary ceremony for the seniors will take place following the game.