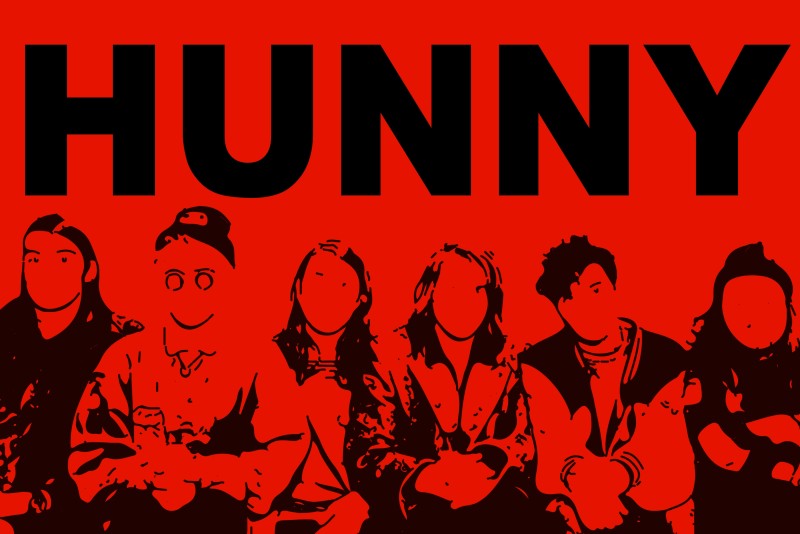 Kid Cadaver opened up the night with neon electro pop with a slight punk formula that emulated the likes of State Champs and Tokyo Police Club. Their song “Let Your Youth Show” brought forth a dance wave in the audience with the coupling of a wistful chorus and melodic hook. The band’s enthusiastic personalities could be reflected onto their unicorn socks paired with Creepers to their playful banter with the crowd. Kid Cadaver’s electrifying performance was met with applause and off-pitch screams from all the alternative kids that had only came for HUNNY.

The OC-based band Armors, the second band of the night, left me craving an espresso shot as the band began to lose their momentum in the midst of their set. Their sound replicated a “great value brand” Twenty One Pilots with a messy stylistic blend of electronic, rock and rap. Unfortunately, they just ended up sounding like pop chameleons trying to mask their indie pop sound in several genres. During the lull of their performance, I was attentive toward the sounds escaping the synth and keyboard player, Sam Beresford, who happens to be a UCSB alumnus. I suggest that he should commit a Zayn and leave his underwhelming band for his own good. Since the previous five-piece shrunk down to three, lead vocalist Olen simultaneously sang and drummed while standing up. They have the whole energetic sound intact, but the dark undertones ended up casting a spell on their genuine lightheartedness. Their song “Parasite” was the standout of their lengthy set list, the only part that roused me enough to wake up.

As HUNNY began to take the stage, the glitter-clad six-piece sauntered around each other and exchanged laughter when they hit the wrong chords. I spoke with an impatient Morgan McIntyre, who had recently seen HUNNY alongside the Neighbourhood last year.

“HUNNY reminds me of all the rock influences I grew up on, and they all look like they just stepped out of Goodwill, which only adds to their whole ’90s bully aesthetic.”

The ’90s bullies opened the show with “Natalie,” despite the heartrending profundity within this song, the combined background of the Velvet Jones’ faux New York skyline and lead singer Jason Yarger’s drunken slurring of “It’s been a week or 15, Natalie hasn’t said a word to me,” devoured the audience. Yarger crooned over the microphone with wine in one hand, only letting it down to begin his lurid guitar layering. During the middle of the set, after their performance of “Cry for Me,” Yarger threw his guitar on stage and took a one minute break to the bathroom, which left the audience in a state of confusion while the rest of the band continued with an extended instrumental. After HUNNY finished performing every song off their notable EP, they ended the set with new songs. Yarger kept profusely apologizing for the slew of new songs which had fans guessing at lyrics.

The energy from the audience, hardly larger than 40 people, became immensely more fluid when the band belted out “Parking Lot,” an immaculate performance from Kevin Grimmett who provided stabbing synths. Yarger kept obnoxiously rocking the mic back and forth as I held out my right hand since death by a microphone falling on me is not one of the things on my bucket list. The intimacy of the venue allowed me to be sprayed in the face by Yarger’s spit during the “July” performance, possibly a pivotal point of my life. HUNNY’s fuse of slinky ’80s-style post-punk vocals, layered guitar riffs and genre-defying sound brings them a future of moving on from venues that have a capacity of 100 people to selling out arenas. My suggestion is to go experience an intimate, angst-ridden HUNNY show before they start selling tickets at a $60 price tag.

Overall, the show was worth losing my hearing for about one hour after HUNNY wrapped up their performance and getting spit in my eye. I was faced with a revitalization for post-punk music, leaving me wanting to star in a ’80s movie with The Cure playing in the background.