The Daily Nexus
Sports
Gauchos To Close Season at Home with UCR and Cal Poly
March 3, 2016 at 5:08 am by Elliot Thornton

Following an 80-62 victory at Cal State Fullerton last weekend, the UCSB men’s basketball team hopes to extend its six-game winning streak to eight games as it will host UC Riverside tonight and Cal Poly on Saturday.

“Winning builds an adrenaline level, and I think our adrenaline [for games] has been good,” Head Coach Bob Williams said. “We’ve been playing much looser, harder and made major improvements defensively.” 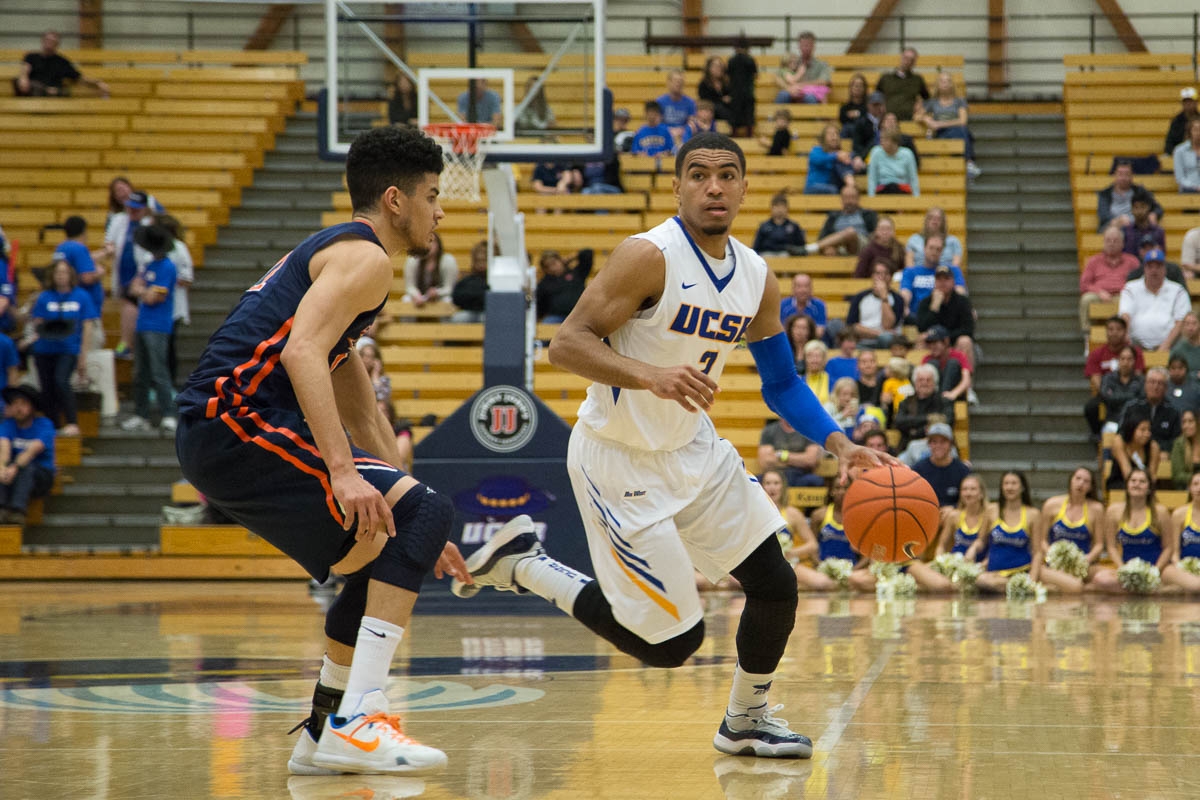 With just two games remaining in the regular season, the Gauchos currently hold the fourth seed in the Big West standings with an overall record of 15-12 and 9-5 in conference. UC Riverside embarks on its final road game, coming to the Thunderdome with an overall of 14-16 and 5-9 in the Big West. Cal Poly, seeking to avenge its conference-opening loss to Santa Barbara, sits at 10-17 overall and 4-10 in conference.

After suffering a home loss to Hawaii on Feb. 4, Santa Barbara has since redeemed itself with its latest winning resurgence. UCSB has beaten all of its opponents by double-figures during its six-game win streak.

After starting the year with a conference record of 2-4, the Gauchos have matured from their rough start gaining some valuable momentum as they near the Big West Tournament. Coach Williams accredits the team’s solid play to its tough matches against Long Beach State and Hawaii early in its conference schedule.

“We came out absolutely flat [for Hawaii and Long Beach],” Williams said. “We were humbled by [these losses] and have come out with a much greater sense of urgency.”

Senior guard Michael Bryson will certainly pose as a mismatch on offense for Riverside, gradually coming into his own during the Gauchos’ winning stretch.
Bryson, who earned himself his second nomination as the Big West Player of the Week this year on Monday, propelled the Gauchos to victory last Saturday after scoring a team-high 19 points.

Connecting from deep five times on Saturday, the fourth-year starter broke James Powell’s record for the most three-pointers in school history, moving to first all-time with 223. Bryson now has 1,523 career points, just 57 shy of seventh place all-time for UCSB.

Bryson’s recent shooting stroke will enable Williams to run spread sets on offense, keeping defenses discipline beyond the arc. The 6’4” guard is currently shooting 61 percent from three in his last two games.

Bryson, who leads the conference in scoring with 18.5 points per game, has scored double-figures in 25 of 26 games this season.

As for Head Coach Dennis Cutts and the Highlanders, junior forward Secean Johnson will be the go-to guy on offense. After dismissing All-Big West forward Taylor Johns from the team for undisclosed team violations, Johnson has embraced a larger role for Riverside down in the post.

Now seeing an increase in minutes, the junior transfer is averaging 19.0 points and 8.0 rebounds in his last two games, contest in which Johns was inactive.

For Saturday night’s game, the Gauchos must contain seniors Reese Morgan and David Nwaba. Morgan is coming off two career games, scoring 23 points against Cal State Northridge and dropping another 22 in his senior night game against Fullerton.

Nwaba will be another defensive concern for UCSB. The Santa Monica College transfer led the Mustangs in their last outing against Santa Barbara, scoring a team-high 16 points to go along with nine rebounds. Look for Bryson to be matched up with the 6’4” Nwaba as he uses his frame to slash his way to the rim.

The Gauchos will also honor seniors Sam Beeler, Mitch Brewe, T.J. Taylor, Dajuan Smith, John Green and Michael Bryson on Saturday. Williams expects an intense crowd and rowdy atmosphere to be a central component in propelling his seniors to victory.

“We hope it gets rowdy [on Saturday],” Williams said. “Our seniors deserve it — they’ve had really great careers here and it’ll be great for the student body and community to pay tribute to these kids.”

Tonight’s game begins at 7 p.m. The Blue-Green rivalry will be reignited Saturday, March 5 at 4 p.m.