In 2015, UCSB had the eighth highest number of Peace Corps volunteers among universities, increasing from a ranking of 18th in the previous year

Since U.S. President John F. Kennedy established the Peace Corps in 1961, over 220,000 Americans have volunteered with the organization in 141 countries. Currently, there are 43 UCSB graduates serving in 27 countries including Paraguay, Mali and Cambodia.

Tymon Manning, UCSB alumnus and Peace Corps regional recruiter for Los Angeles, said he is glad to see the positive effects of recruitment efforts at UCSB.

“We work with career services to set up information sessions, post positions through the job portal and attend career fairs,” Manning said. “And then I’ll do things like class talks encouraging students to come to our events.”

Manning said he has seen an increase in “sustained interest” from UCSB students.

“I think it’s really nice that we are moving ahead even as the number of applications is increasing,” Manning said about UCSB’s eighth place rank. “It makes me proud to think that students are becoming more interested in the world and not just getting jobs in America or California … We are getting more globally minded.”

Tara Flint, UCSB alumna and Peace Corps returnee, said she was always interested in the Peace Corps because her father volunteered in the 1980s, and she decided to join after hearing a representative speak in an environmental careers course at UCSB. 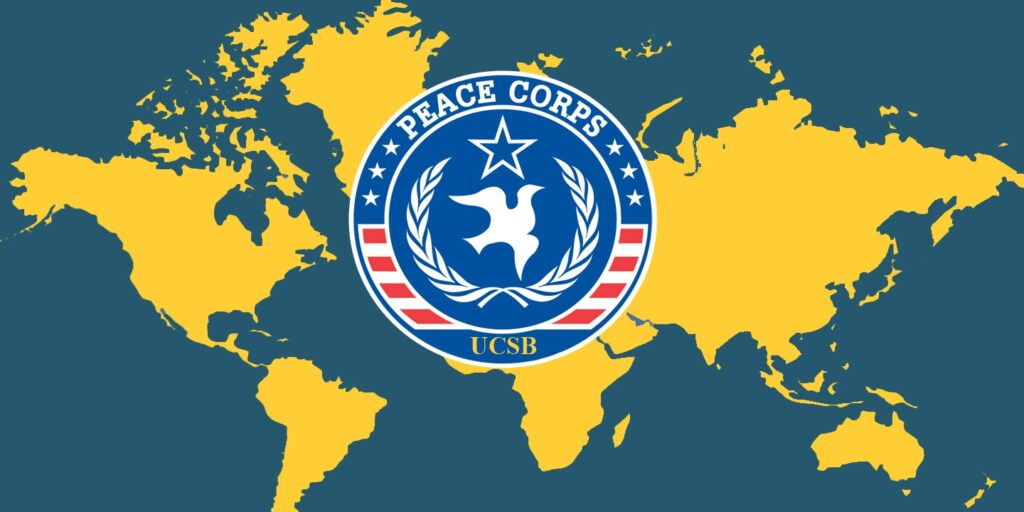 “One of the sessions in that class actually had a Peace Corps representative come and talk to us about Peace Corps, what it is and how you apply,” Flint said. “That kept my interest [in Peace Corps] going.”
Flint said she believes joining the Peace Corps is a valuable experience, and she encourages UCSB students to volunteer with the organization.

“I encourage any and all UCSB students to look into the Peace Corps and see what it is,” Flint said. “I think it is extremely rewarding; you just have to make sure that it is the right thing for you to do at that point in your life.”

“Over the last two years, Career Services has been working with Ty Manning … who really understands UCSB and has been able to increase the numbers in Peace Corps volunteers,” White said. “He is promoting the Peace Corps in all different types of places, all throughout campus and its different communities.”

This year, the Peace Corps will be “heavily involved” in UCSB’s LGBTQ events, according to White.

“You can really see the success in building those relationships and getting the word and opportunities of the Peace Corps out there,” White said.

Darlene Moreno, UCSB alumna and current Peace Corps volunteer in Armenia, said she attended Peace Corps information sessions at UCSB to learn more about the organization and even kept in touch with UCSB’s Peace Corps recruiters up until leaving for her service.

“Through these sessions, I learned more about the application process and what the Peace Corps was looking for in a volunteer,” Moreno said in an email. “Because of the suggestions I received during these sessions, I became a volunteer at my old high school and at a local library near my home in Los Angeles in order to gain more experience with students before applying to the Peace Corps.”

“I contacted our school’s recruiter, Tyman, and met with him a few times to discuss the application process,” Haislett said in an email. “I also attended an event put on by the Santa Barbara Peace Corps Association which was a great way to meet returned volunteers and pick their brains.”

Haislett said UCSB’s recent ranking does not come as a surprise.

A version of this story appeared on p. 1 of the Thursday, Feb. 25 print edition of the Daily Nexus.