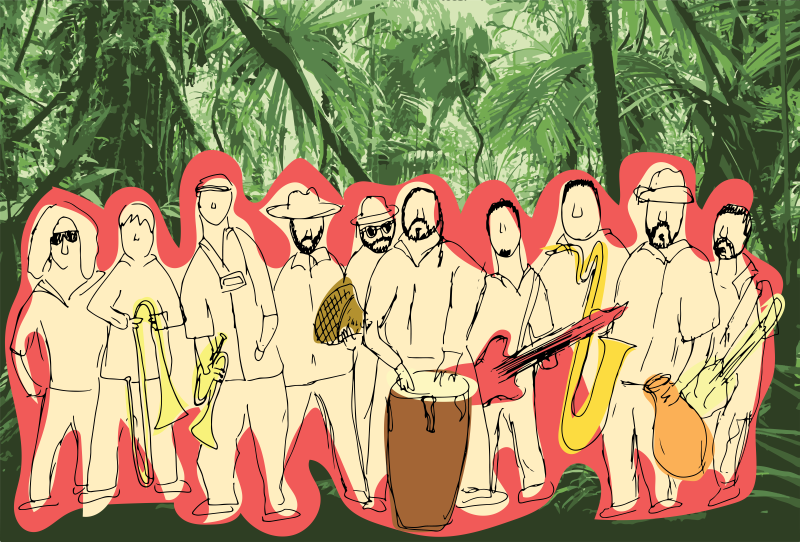 Bingo night met Isla Vista on a Saturday night as the old and young murmured and mingled together for a night of Afro-Latin rhythms courtesy of Jungle Fire on Friday Feb. 19 in the Multicultural Center.

Jungle Fire’s loud and stern chants from behind the red curtain trumped the muted conversations of the crowd, demanding a surge in energy that would come to characterize the evening. Chanting and clapping, the Los Angeles-based band emerged from behind the curtain and stationed themselves near one of the 13 glistening instruments positioned all over the stage before jumping into some tracks from their debut album, Tropicoso.

Although the wedding band look of crisp, white button-ups, fedoras and five-o-clock shadows may be misleading, this 10-member collective knows how to keep the crowd out of their seat. While the band maintained a mild two-step throughout their performance, the fusion of 1970s funk and Afro-Latin dance rhythms moved the crowd beyond a simple two-step. Led by somebody’s father in the front row, the second the percussion instruments rang throughout the theatre, people whipped out some funky moves to the funk-filled tunes.

The audience’s acceptance of the “Firewalker” artists’ dependence on instruments and an absence of lyrics illustrates that music is all about energy. The rattling of the West African shekere, the booming Cuban congas and piercing American electric guitar meshed together to create undeniable dance tunes for those from all walks of life. Santa Barbara resident Betsy Brenner praised such combinations.

“I like the way the different rhythms come together, the drums with the cow bells,” she said.

As the drums echoed throughout the theatre and the horns screeched, zebra-striped ponytails swung from shoulder to shoulder alongside hip-twisting neighbors. Everyone was connected through the complex fusion of Jungle Fire, unbothered by anything outside the rhythms.

The Santa Barbara first-timers reiterate these sentiments of interconnectedness as they shared the development of their sound. One member shared that a particular song developed as they witnessed some children in an alley toying with a melody before allowing one of the guitarist to record their efforts, later transforming it to create their own track. Although there are no lyrics offering an explicit message, their blending of cultures through their sound and sources of inspiration conveys to listeners the positive interactions and feelings that arise when people embrace the fact that everyone is interconnected.

While Jungle Fire steers clear of melodies, their special guest, Alan James, brought lyrics and powerful vocals to complement the soulful beats. As James bellowed, giving Bruno Mars a run for his money in the funk realm, he maintained the clapping ignited by the composers. Together, they bounced near the grounds symbolizing the breakdown in the beat before bouncing upwards with an increase in instrumentation to accompany James’ exclamations of “gotta get myself together, gonna get higher.” As James’ appearance came to an end, the collective directed more rapid clapping and declared, “it’s getting ready to be that time” before the lights dimmed to pink.

As the show approached its end, the band aimed to leave the crowd in the highest spirits possible. Abandoning their two-step, the groovy group entertained an occasional jump and clink of drumsticks. The three percussion players stationed at the front of the stage maintained the excitement through their version of musical chairs as they bounced from one instrument to the next with the seemingly permanent smirks of all band members widening.

While one concertgoer plopped down in her chair with her head dangling over, most attendees were able to drag themselves out of the MCC theatre and examine hard copies of the music that tired their bodies. To hear the tunes, check out their self-titled website junglefiremusic.com.