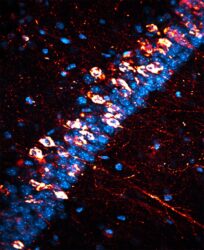 Neurofibrillary tangles (shown in blue), formed by beta-amyloid protein aggregations, comprise neural communication and are a leading cause of Alzheimer’s.

How many times have you walked into a room and forgotten what you needed? Forgetfulness is a part of everyone’s daily lives, but many fear that as they age and their scatter-brained tendencies increase, it can be a sign of a disease many dread to face — Alzheimer’s disease. Alzheimer’s disease is a progressive brain disease in which memory, thinking skills and, eventually, the ability to perform basic tasks are destroyed. Dr. Kenneth Kosik at UC Santa Barbara is a lead neuroscientist trying to crack the code to Alzheimer’s disease who recently published a book, Outsmarting Alzheimer’s, which provides information on how to best prevent occurrence of Alzheimer’s.

After performing an autopsy on a deceased woman who exhibited memory loss and unpredictable behavior, Alzheimer (a German psychiatrist) discovered what is now known as the main feature of the disease — a brain riddled with plaques and tangles. These plaques and tangles compromise the ability of neurons to communicate with one another. Amyloid plaques form when specific proteins in the neurons of the cell membrane are processed abnormally. This causes small fragments called beta-amyloids to be released that clump together and form insoluble oligomers that are toxic and interfere with the function of neurons. Tangles are made when proteins, called tau proteins, malfunction. The stable tau proteins are coupled with microtubules to form critical structures for the cells’ internal transport system. In patients with Alzheimer’s disease, tau malfunctions and causes the transport system to fall apart, allowing strands of tau protein to break free and form tangles inside of the neuron. Consequently, neurons disconnect and die, destroying the cell and causing many of the symptoms associated with Alzheimer’s disease. The plaques and tangles continue to build up, causing the brain to slowly shrink and lose function. A fascinating aspect of Alzheimer’s disease is that the mechanism of how the neurodegeneration occurs — that is, what parts of the brain are malfunctioning — is well understood. The mystery of Alzheimer’s disease surrounds the fact that what triggers the malfunction of proteins in the brain that cause plaques and tangles to be formed is not well understood.

Dr. Kosik’s research focuses on the plasticity and evolution of synapses to better understand Alzheimer’s disease; he researches how mRNA is involved in plasticity. There are two main parts of the role of mRNA in plasticity — mRNA translocation and translation in dendrites. DNA is transcribed into RNA and RNA is translated into an amino acid sequence that codes for proteins. Dr. Kosik has been able to observe the translocation of mRNA in dendrites in the form of granules that move along microtubules. This was done by engineering a nucleic acid-peptide capable of visualizing the translocation of a 5’ untranslated RNA sequence complexed to a green fluorescent protein. Using RNA sedimentation techniques, Dr. Kosik was also able to isolate and characterize the RNA granule as control site where specific mRNAs were held until they were stimulated for use. Future projects involving RNA granules include but are not limited to the identification of the components within the granules, characterization of their interaction with microtubules and the direct visualization of RNA transport. Alzheimer’s is a progressive neurodegenerative disease in which plasticity is lost.

The multifaceted research done by Dr. Kosik is ultimately designed to better understand the mechanisms of Alzheimer’s disease. In his book, he outlines steps everyone can take to help lower their risks of getting the disease. The recommended steps presented in his book are easy to follow and apply to everyday life. Dr. Kosik’s advice is broken up into six easy to remember “smarts” — social, meal, aerobic, resilience, train-your-brain and sleep smarts. Following the M.I.N.D. diet — Mediterranean and Asian or vegan eating — as well as exercising for about 30 minutes a day lowers blood pressure, cholesterol and blood glucose, which in turn is beneficial for brain health. In addition, maintaining an active brain through puzzles or learning a new language is a major key to healthy brain success. Dr. Kosik emphasizes that although everyone is susceptible to the disease, when people change their lifestyles, brains change for the better as well.

A version of this story appeared on p. 14 of the Thursday, February 25, 2016 print edition of the Daily Nexus.