The Santa Barbara City Council approved the Bike Master Plan by a vote of 6-1 on Tuesday, moving forward a plan that will create more bike paths in downtown Santa Barbara.

More than 300 community members attended the meeting, with many voicing concern over the plan to remove between 85 and 100 free parking spaces on Micheltorena St. to make space for the bike lanes. The council approved the green-painted bike lanes on Micheltorena St., between Castillo St. and State St., by a vote of 5-2, saying the lanes will connect gaps in the bike paths within downtown Santa Barbara, making bike travel safer and easier. 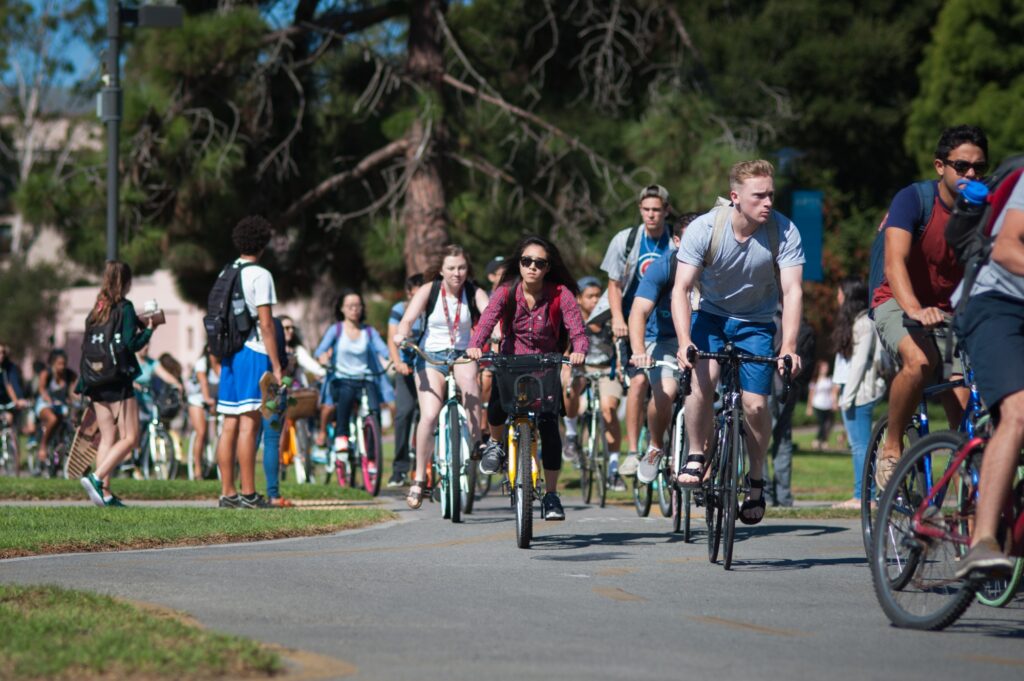 Fire Marshal Gina Sunseri said City Council was dedicated to ensuring that the community was a part of the discussion.

“The city administrator’s office takes it very seriously to get the information to the public,” Sunseri said. “It’s not like we gear up with a fire marshal and the police to send people away. We really try to make it so that everybody can hear and participate.”

Vernon McCaslin, who owns a local business and works with veterans, was concerned about the impact on handicapped parking.

“The plan needs to be thought out better,” McCaslin said. “[City Council hasn’t] offered a viable solution for what they are going to do with businesses, cars and people that go to those businesses.”

Mike Ober, a UCSB alumnus and an architect, said a bicycle lane would be more valuable than parking spaces.

“The primary purpose of streets is to facilitate the movement of people,” Ober said. “Free parking is a bonus. All [that space] is just free parking that anyone has a right to.”

Ober said that because more people are commuting via bike, there will be more parking spaces available.

“Every day that I ride a bike instead of drive, there’s going to be one more parking space — one more precious, beautiful, asphalt parking space — just waiting,” Ober said. “I think once the emotions settle, people will realize making biking more accessible and safe will result in additional parking.”

Joey Juhasz-Lukomski, operations manager for the Santa Barbara Bicycle Coalition, said it is “so valuable” to have a complete and connected bike pathway.

“As a bicyclist, I know that [Micheltorena] has no bike lanes,” Uribe said. “I’ve been close to getting hit a couple times, and I’ve seen people get hit on that street.”

Ober said bicycle safety should be a primary concern for the Council when considering the Master Plan.

“A lot of motorists get passionate about parking or keeping streets for cars, but for them, it’s a convenience issue,” Ober said. “For cyclists, it’s a safety issue. It’s life and death.”

Ober said his time spent on UCSB’s campus helped him discover the efficiency of biking.

“UCSB is a lovely place to discover cycling as a practical way of getting around,” Ober said. “I lived on 6800 block of DP [Del Playa Drive]. I also lived on Phelps [Road] which is out by Costco. It taught me that it is way faster to ride a bike to get to class.”

Tiffany Wu, second-year economics and accounting major chair of the A.S. Bicycle Committee, said she is pleased with the Council’s decision.

“I’m really glad they passed it because it’s more sustainable and a lot safer for students because we are part of the community as well,” Wu said.

A version of this story appeared on p. 1 of the Thursday, Feb. 25 print edition of the Daily Nexus.