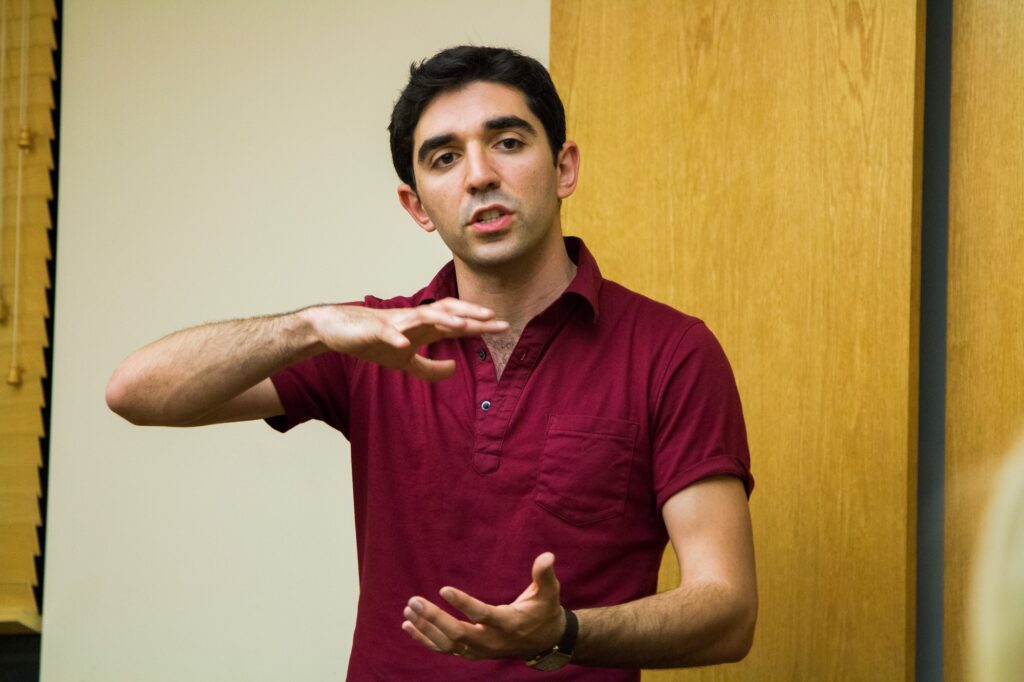 Gauchos United for Israel and Santa Barbara Hillel hosted an open discussion with Israeli soldiers on Tuesday as part of a nationwide tour put on by the organization StandWithUs.

The Israeli Soldiers Tour program enables reserve duty Israeli college students to share their experiences as ordinary Israeli citizens, their views on the Arab-Israeli conflict and their personal stories to reveal the individuals behind the Israeli Defense Force (IDF). The tour has travelled throughout the U.S., visiting colleges, high schools, synagogues and churches.

Danielle Cohen, third-year film and media studies and sociology double major, said the discussion provided a first person account of the experiences of the Israeli soldiers.

“It’s really cool to get first hand experience from the Israeli soldiers’ perspective, especially because we spend so much time learning about Israeli policies in conflict. It’s really insightful to hear from them,” Cohen said.

Third-year psychology major Eidan Shalom said he was interested to hear from IDF soldiers firsthand about their experiences.

“I think it’s a cool opportunity to speak to the people that are actually there. Primary sources, rather than what we hear on the media,” Shalom said. “Hear from the people that see it — that live it.”

Both guest speakers chose to share only their first names with the audience, as there had been angry comments posted on social media concerning members of IDF coming to speak.

Gilad, 27, spent six years in the IDF as a paratrooper and later as part of the Intelligence Corps. He said the media does not effectively portray the experiences of soldiers in Israel.

“We say in Israel we don’t always have a choice on if we want to fight or not, but we do have a choice on how we fight,” Gilad said. “This is one of those things you won’t hear about in the news because you really don’t have to.”

Edan, 28, was with the ground combat division. He is pursuing a PhD in a program involved in researching heart regeneration to help fight against heart attacks. According to Edan, the purpose of the tour is to inform the public about the plights of Israeli soldiers in order to counter media sources that misrepresent them.

“[I] could go on and on about my research, but that’s not why I’m here. My heart, and Gilad’s as well, is under a different kind of attack. In saying that I mean we hear and we follow what goes on around the world,” Edan said. “Sources change all kind of acts and makes all of these accusations about us towards Palestinians. And this is very tough for us and very frustrating. And that’s why we’re here, going around and sharing our personal stories and giving people the opportunity to listen to real stories without anyone changing it in the process.”

Gilad said he became involved in the Israeli army because he felt it was the best thing he could do for himself.

“I know we come and we talk and parts of the army might sound cool. But it sucks. But you really do it because you understand that this is the most important thing you could be doing with yourself right now and it is for me,” Gilad said. “And you ask what you get from the army? And for me, it’s a sense of proportion.”

The Israeli Soldier tour is in its first session, traveling around the Southern United States. A second tour will begin in mid-April touring the Northern states.

The Voice of Reason

Awesome event, I learned a lot! Thanks for hosting.

I found this event extremely interesting and insightful. At a liberal college campus, especially after living in South Africa where international students (with no actual experience under the apartheid system) claimed that “apartheid” can be compared to Israel’s treatment of Palestinians, it was refreshing to finally hear from “the other side” firsthand without some third party or media bias getting in the way. All politics aside, this is food for thought: If Israel’s neighbors were to cease violent attacks on Israeli soldiers/civilians, there would be peace. Simple as that. But if Israeli kids your age doing their mandatory IDF service… Read more »

Baleka Mbete, a South African parliamentary speaker said that “Apartheid in South Africa was a picnic compared to what we have seen in the occupied territories”. I also lived there for 19 years and not in one of those ‘gated communities’ you speak of. Even though it is gated…

• Apartheid is a psychological warfare and propaganda technique used by Arabs to demonize Israel. In 1948, the Arabs said they were going to invade Israel, which had at that time “occupied” NO Arab land (Egypt owned Gaza, and Jordan Judea and Samaria), and throw all the Jews into the sea. The Arabs had modern weapons and aircraft, and the Israelis had small arms and a Piper Cub. The Arabs lost because they don’t like to fight armed men, or even armed women. They are pretty good with children, as shown by the Palestinian terrorist who smashed a little girl’s… Read more »