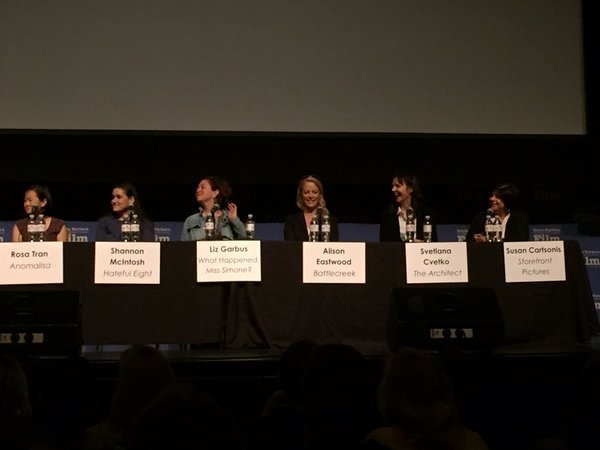 The Women’s Panel was held in the Lobero theater on February 13th, the final day of the Santa Barbara International Film Festival. The guests included Rosa Tran, Shannon McIntosh, Liz Garbus, Alison Eastwood, Svetlana Cvetko and Susan Cartsonis. They talked about their careers and the films they were being awarded for with moderator Madelyn Hammond. She created the panel and has been moderating it for thirteen years.

Tran produced “Anomalisa,” a stop-motion film directed by Charlie Kaufman and received an Oscar nomination for her work. She described her progression through the industry: she went to film school, paying her way through as a manicurist. After working in reality TV, she became a writer’s assistant on Comedy Central and became a puppet coordinator for Robot Chicken. “Anomalisa” co-director Duke Johnson showed her the film’s script, convincing her to produce.       When asked about what was difficult about the production, Tran replied, -“[Keeping everyone together] was tough. There was someone crying her eyes out in the parking lot. You tell her she’s amazing and that this hasn’t been done before, and we’ll figure it out together.”

Shannon McIntosh produced “The Hateful Eight,” working alongside Quentin Tarantino, whose enthusiasm she described as “infectious.” She is a former employee of pre-Disney Miramax. “I had a work ethic that was unparalleled for anyone who worked there.”

McIntosh described how one of the greatest difficulties that came out of “Eight” was the fact that there were only around a dozen working 70mm cameras in the United States. As that was the format Tarantino wanted the film to be shown in, McIntosh had to scrounge together parts from other cameras in order to make sure there would be enough projectors to screen the film in.

Garbus is a renowned documentarian. Her Oscar-nominated film, “What Happened, Miss Simone?” chronicles the life and career of jazz singer and activist Nina Simone. It was made over a period of 13 months and released on Netflix.

When she was in high school, she made her own documentary and showed it at a party, where a PBS producer was in attendance. Afterwards, she studied film at college. A meeting with a prison journalist led her to Angola State Prison, where Garbus met and talked to ten inmates. The resulting documentary “The Farm: Angola, USA,” earned her her first Oscar nomination.

Eastwood is the daughter of film legend and fellow director Clint Eastwood. -“My brother and I grew up on set,” she said. Her picture “Battlecreek” involves a romance between a girl and a boy with a skin disease.

While watching the production of her father’s films, Eastwood felt a need to get involved in film. “I wanted to pay attention. I didn’t want to just sit around.” Ever since, she’s done, “… a lot of good movies, a lot of crappy movies. I learned what not to do. I wanted to produce and develop.”

“Battlecreek’s” script had to be refined over the course of several months and re-started altogether when the original production fell apart. “The passion [keeps me going],” Eastwood said. The production was ultimately saved when someone wrote a check for the whole film.

Yugoslavian native Cvetko works on films as a cinematographer. She started out as a camera assistant on a film set. Later, she went to India to make a short film, which was shown at Sundance.

Like Gaarbus, Cvetko works on documentaries. “In [that] world, the team is very very small. Personal, tight.” Most crews are male, “but there are some amazing women kicking ass out there.” Cvetko says sometimes, she has to convince her male crewmembers that she is on their side.

Cartsonis is the president of production company Storefront Pictures. She attended both UCLA and NYU, deciding she wanted to be a scriptwriter. She ended up getting a job reading scripts at 20th Century Fox, reading up to four a day.

She went on to attract the attention of Scott Rudin, a film producer. After asking her to be his assistant, Cartsonis called him back and, at the urging of her boss, said, “I want to be an executive.”

Despite her high position in the film world, she described how it can sometimes be difficult to acquire funds to make films, something the other panelists agreed with. “You have to figure out the ways that are natural to you to ask for money.” She recently made “Carrie Pilby,” a Kickstarter-backed film.

Towards the end of the event, Hammond asked the filmmakers if they had any pearls of wisdom to share.

Eastwood’s stood out the most: “If there’s something you want to do, do it. Visualize it. Do whatever you have to do to make it happen.”