The Daily Nexus
Sports
Men’s Basketball Makes It Four Straight With Win Over UC Davis
February 22, 2016 at 11:38 am by Elliot Thornton 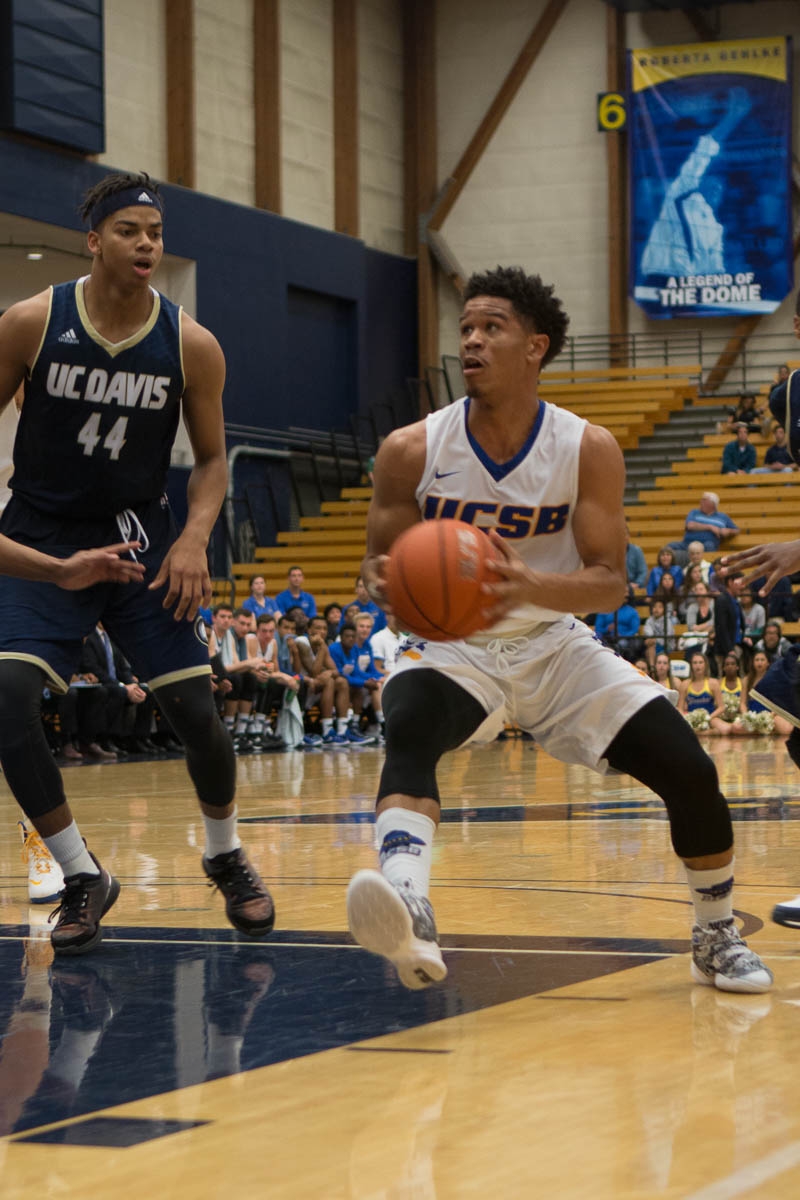 Eric Childress drives into the paint for a layup. Stephen Manga/Daily Nexus

Thanks to a pestering presence on defense, forcing 24 points off 20 turnovers, and a 21-point outing from guard Gabe Vincent, the UCSB men’s basketball team extended its winning streak to four games at home on Saturday night beating UC Davis for the second straight time with a final score of 62-55.

“What we’re doing is getting a lot scrappier,” Head Coach Bob Williams said. “We have this four game winning streak and we’ve only had one good shooting night [aside from Cal State Fullerton]. Our defense, energy, and everything about us is getting better and better.”

Santa Barbara, which was 3-5 and in sixth place in conference to begin the month of February, now improves to 7-5 in the Big West with an overall record of 13-12. The Gauchos are two games back from second place UC Irvine and Long Beach State, both hosting a Big West record of 9-3.

The Aggies, 10-16 overall, lose their fourth straight game and drop to a conference record of 5-8.

“We’ve gotten back over the break even mark and that’s a very good thing,” Williams stated. “I thought we played really hard tonight. We didn’t shoot well, which they had a lot to do with, but we played very hard.”

While it wasn’t the cleanest first half for either team, committing a total of 21 turnovers, the Gauchos jumped out to a 31-20 advantage at halftime due to the shooting hand of Vincent. The shooting guard out of Stockton, CA went 4-7 from the field scoring seven of his teams first 13 points. Vincent led all scorers at the break with 10 points.

Drawing two early fouls and struggling to find his rhythm offensively, senior guard Michael Bryson made his presence known in other categories during the first half. The 6’4” wing recorded seven rebounds, two blocks, and three steals. Bryson also hit home six of his teams seven free throws in the first period, going a perfect six-for six behind the free throw stripe.

Facing an uphill battle similar to their match on Thursday, the Aggies clawed their way back in the second half this time from 11-points. Davis shaved the Gauchos’ lead down to five with 18:27 to go as junior Brynton Lamar finished strong to the rack and then followed it up with a mid-range jump shot to have his team trail 26-31.

The third year guard finished second in scoring for Davis on Saturday, one point shy of senior Josh Fox’s team-high 17 points. Not only Lemar keep the game within reach scoring 11 of his 16 points in the second half, the San Diego, CA native earned himself a double-double crashing the boards on offense and defense for a total of 11 rebounds.

Despite a strong effort from Fox and Lemar, the Gauchos ended the game in dramatic fashion as junior guard Eric Childress led a 3-on-2 break and dished a no-look pass to Vincent for the go-ahead dunk with 1:02 remaining. Vincent’s slam magnified UCSB’s lead to 10 after that point.

Santa Barbara also had a major boost from its bench, including a 9-point contribution from senior forward Mitch Brewe. The 6’8” senior scored seven of his nine points in the first half and helped add to the Gauchos’ season-high 13 steals with two picks.

“I just tried to bring a lot of energy physicality, and a big defensive presence [tonight],” Brewe said. “I didn’t do a good job of finishing in the beginning of the game but [afterwards] got in a rhythm a little bit. I think coming off the bench bringing a lot of energy and keeping the level high is really important.”

“It was a team win for everybody tonight,” said Childress. “We just knew we had to make plays.[Davis] is a physical team and when we have a night like this when we’re not shooting well we have to be aggressive back with them and our bench came in and did that.”

UCSB has outscored its opponents’ bench in each of its last four games, averaging 20.5 points per game. This is a reasonable chunk of their 70.1 point average per game.

Santa Barbara sets foot on its two-game road trip this week starting with a Thursday night match against Cal State Northridge and a Saturday game at Fullerton. The Gauchos game at CSUN will take place in the Matadome at 7 p.m.