The Daily Nexus
Sports
Gauchos Start the Season Perfect
February 22, 2016 at 5:57 am by Jorge Mercado 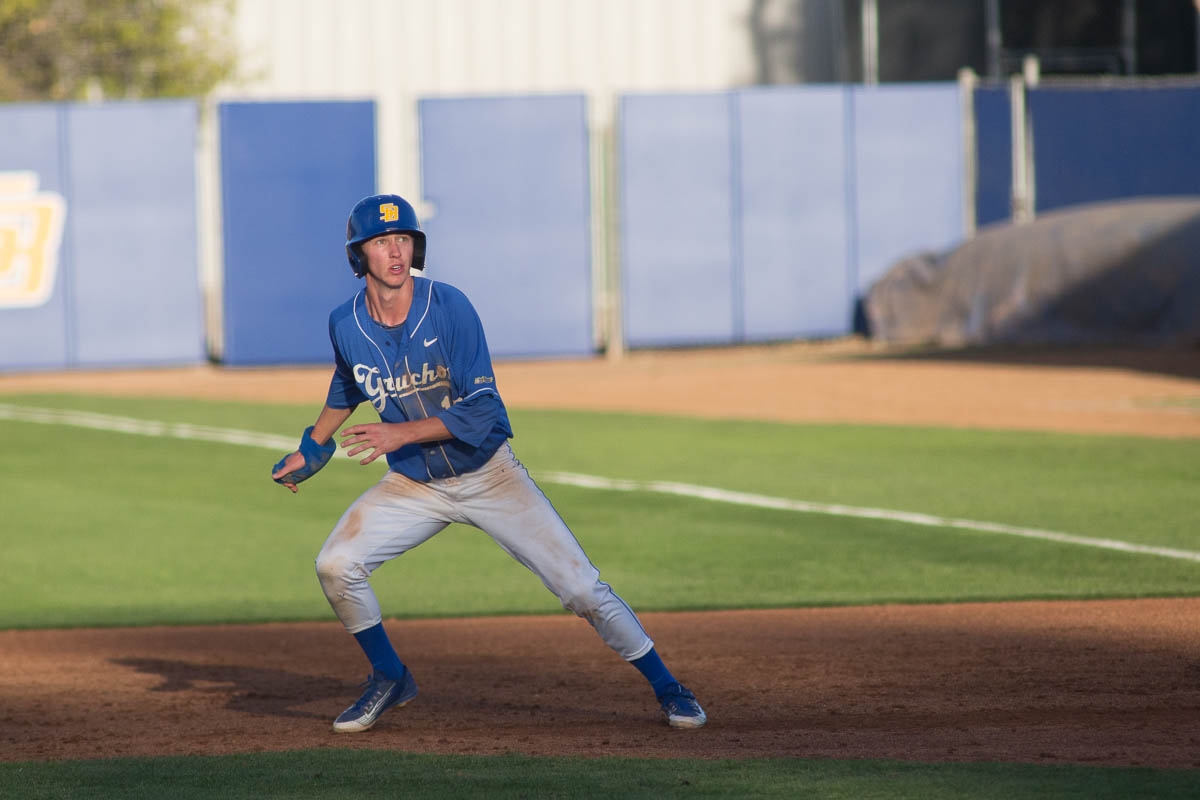 Clay Fisher leads off from first base. Dustin Harris/Daily Nexus

The new look UCSB baseball team started the season hot sweeping the University of San Francisco in a four-game series which included a Saturday doubleheader.

UCSB entered Sunday’s final match-up against USF with an amazing opportunity to start the season 4-0 for the second straight year in a row with a win.

The score was tied 1-1 at the bottom of the third when Calica hit an amazing inside the park home-run after a perfect hit to right field to give his team the lead.

“You know its great being a momentum setter for your team.” Calica said. “I’m glad I was able to do that and that we were able to grind out a solid win.”

After that the Gauchos seemed adamant on hanging on to that lead. In the fifth inning a sac fly by sophomore first baseman Kyle Plantier and a big two-RBI single by redshirt sophomore outfielder Josh Adams gave them a solid 5-1 lead after five innings.

The game was sealed in the seventh inning when Adams hit a big two-run homer to give his team a 7-1 lead. UCSB gave up two runs in the ninth inning, however, it still hung on and won the game 7-3. Redshirt sophomore Joe Record had a great outing on Sunday on allowing three hits and one run with five strikeouts in seven innings pitched.

“Our guys did a good job.” Head Coach Andrew Checketts said. “We did a great job on the mound, Joe [record] had a solid game.”

Before Santa Barbara achieved the sweep, it first had to play a doubleheader, something that is tough for any team. However, the Gauchos had a fast start in the late game that made it a bit easier for them.

UCSB came out firing offensively scoring three runs in the first inning. After two Dons runs in the second inning, the Gauchos responded by scoring two runs of their own, including a great homerun by Calica, and maintaining a three run lead at 5-2.

Santa Barbara’s most effective inning came in the bottom of the fourth when it scored six runs and took a solid 11-2 lead. It eventually won the game 13-5.

The Gauchos offensive prowess was highlighted by all nine hitters recording at least one hit and the team having 19 hits as a whole. Calica’s 3-5 day, which included the aforementioned homerun, and sophomore Clay Fisher four singles were notable performances in UCSB’s great offensive day.

In the earlier game, Santa Barbara had an early scare when they found themselves down 5-1 heading in the bottom of the sixth inning. The Dons offense was led by junior outfielder Harrison Bruce who went 2-4 with 3 RBI and junior Dan James who hit the first homerun of the season for the Dons in the second inning.

The Gauchos comeback effort began in the sixth inning when Plantier started the three-run rally with a single. Four of the next six UCSB batters got hits which led to the three runs that cut the Dons lead to just one.

Santa Barbara completed its comeback in the eighth inning when junior outfielder Devon Gradford hit a sac fly that put two runners in scoring position. Senior third baseman Ryan Clark batted the two runners and give his team a 6-5 lead.

The Dons tried to put together an effort in the final inning, however, the offense dried out as sophomore Kyle Nelson pitched a 1-2-3 inning to seal the victory for the Gauchos.

Before UCSB played a brutal doubleheader, in its season opener redshirt sophomore J.J. Muno had the game of his life to lead his team that day. The second baseman had a solid hitting day going 3-5 with 4 RBI and came just a single shy of hitting the cycle.

“I was floating out there for a while.” Muno said. “I had no idea what was going on it was amazing.”

The Gauchos season started hot with three scores in the first inning which began with Muno’s double. Plantier batted in his second baseman with a single and redshirt sophomore catcher Dempsey Grover hit in two more runners later in the inning.

UCSB allowed one run at the top of the second but Muno hit a two-RBI triple that gave his team a 5-1 lead. The sophomore’s homerun in the fourth inning gave the Gauchos a commanding 7-1 lead.

After taking a 7-1 lead, Santa Barbara gave up one run but also added one to win the game 8-2 and start the season off the right way, with a win.

“We were pretty solid defensively.” Checketts said. “We did a lot of good things and got a good lead early.”

“I thought our guys on the mound did a great job.” Checketts said. “Beiber was in character and threw some solid strikeouts.

The Gauchos perfect start to the season is a great sign of things to come. The young team seemed poise to battle and showed fans new players that seem as though they will contribute a lot to this team.

“There was so much offensive production,” Checketts said. “I was happy with performances from guys like Clark, Muno. Clark in particular hits in the nine-hole and when your ninth batter bats .450 that’s a good sign.”

UCSB’s next game is Tuesday at 2 p.m. against St. Mary’s at Caesar Uyesaka Stadium