Emile Nelson, the paper’s editor in chief, said in a statement that he “couldn’t be happier with the results of this year’s CCMAs.”

Even better than the awards “is knowing that each and every one was earned through the dedication and passion of the students here at the Nexus,” Nelson said.

“That’s what makes us a nationally ranked newspaper and that’s what’s going to keep us serving this community in the best way we possibly can — the passion, honesty and ability of the students at the Nexus.”

The judges wrote that DailyNexus.com “excelled with a clean and well-organized home page, strong navigation tools and a wide variety of content,” adding, “An easy-to-use search tool helps find stories as far back as 2000.”

Nexus Copy Chief Simone Dupuy won best headline portfolio for what judges wrote was a good mix of “inventive and informative heads.” The headlines included “Waive Goodbye to Your Financial Aid” and “Deltopia 2015: Boots on the Ground, But It’s Still Going Down.”

Photographers McLane Brown and Paris Cullen and Photo Editor Lorenzo Basilio won best photo series for “In Photos: Candlelit Vigil,” which documented a vigil that thousands attended after the shooting in Isla Vista in May 2014. 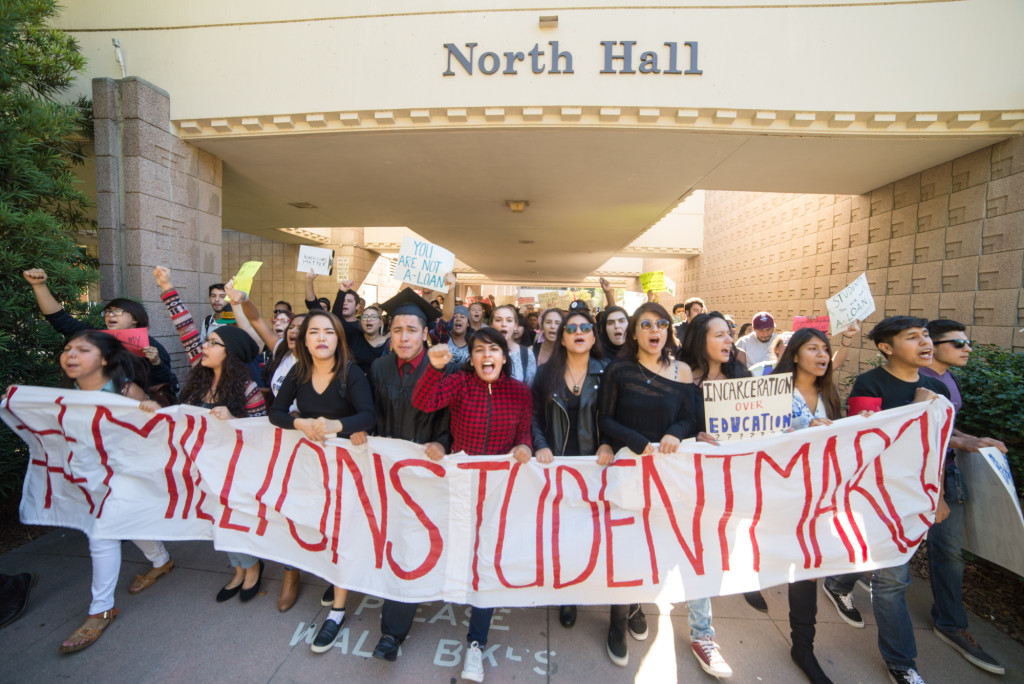 Photo Editor Lorenzo Basilio won third place in the news photograph category for this photo of the Million Student March in November.

Basilio also won third place in the news photograph category for his picture of UCSB students marching in the Million Student March in November. “It’s hard to make protest photos not look staged for the media’s benefit,” the judges wrote. “This is different. There’s movement, there’s emotion in all the faces and there’s an excellent crop and framing.”

Assistant News Editor Nicholas Bogel-Burroughs won best editorial for “Ineffective at Best, Frightening at Worst: Inside Gaucho FYI,” which judges wrote was a “persuasive commentary on how a mandatory workshop meant to educate students on the dangers of sexual assaults failed.”

A full list of the CCMA awards can be found here.

How does this happen? The Nexus is awful barely an article worth reading. Other papers must be even worse?

Right?! It’s so awful I bet you don’t even 1) visit its website 2) read its news articles or 3) participate in its comment sections.