About 45 UCSB students beat each other senseless with foam-covered PVC pipes on Saturday in a live action role-playing (LARP) battle to support lymphoma research.

“Be somebody!” shouted Nik Frey, fourth-year political science major, as two lines of students, protected only by makeshift shields of Coors Light boxes and other materials, ran at each other.

The battle has begun! pic.twitter.com/QscFJSCSkI

Bystanders gaped as battlecries and theme music from “The Lord of the Rings” resonated from the event, which organizers named “The Battle of Dogshit Park 2016,” referring to Isla Vista’s infamous, feces-strewn Del Playa Park.

While donations were not mandatory, many LARPers contributed $3 to the Lymphoma Research Foundation.

“When you mobilize people, you can do things that are cool and have fun, but it’s way cooler when it’s for a good cause,” said Frey, who led the event. Donations from two battles held at the park last year went to Doctors Without Borders.

Maya Etcheverry, a third-year exchange student from France majoring in feminist studies, said she attended the event to support her friend, one of only three women participating.

“Every guy [is] so into it,” she said, adding that the battle looked like something from Game of Thrones. “It’s so cute because you just give boys swords and weapons and they can just have fun for hours.”

Etcheverry said she had planned to join the action, but, after seeing how intense it was, chose to spectate instead.

“I wanted to do it, but I’m kind of scared, honestly,” she said. “I know they won’t hurt me on purpose.” 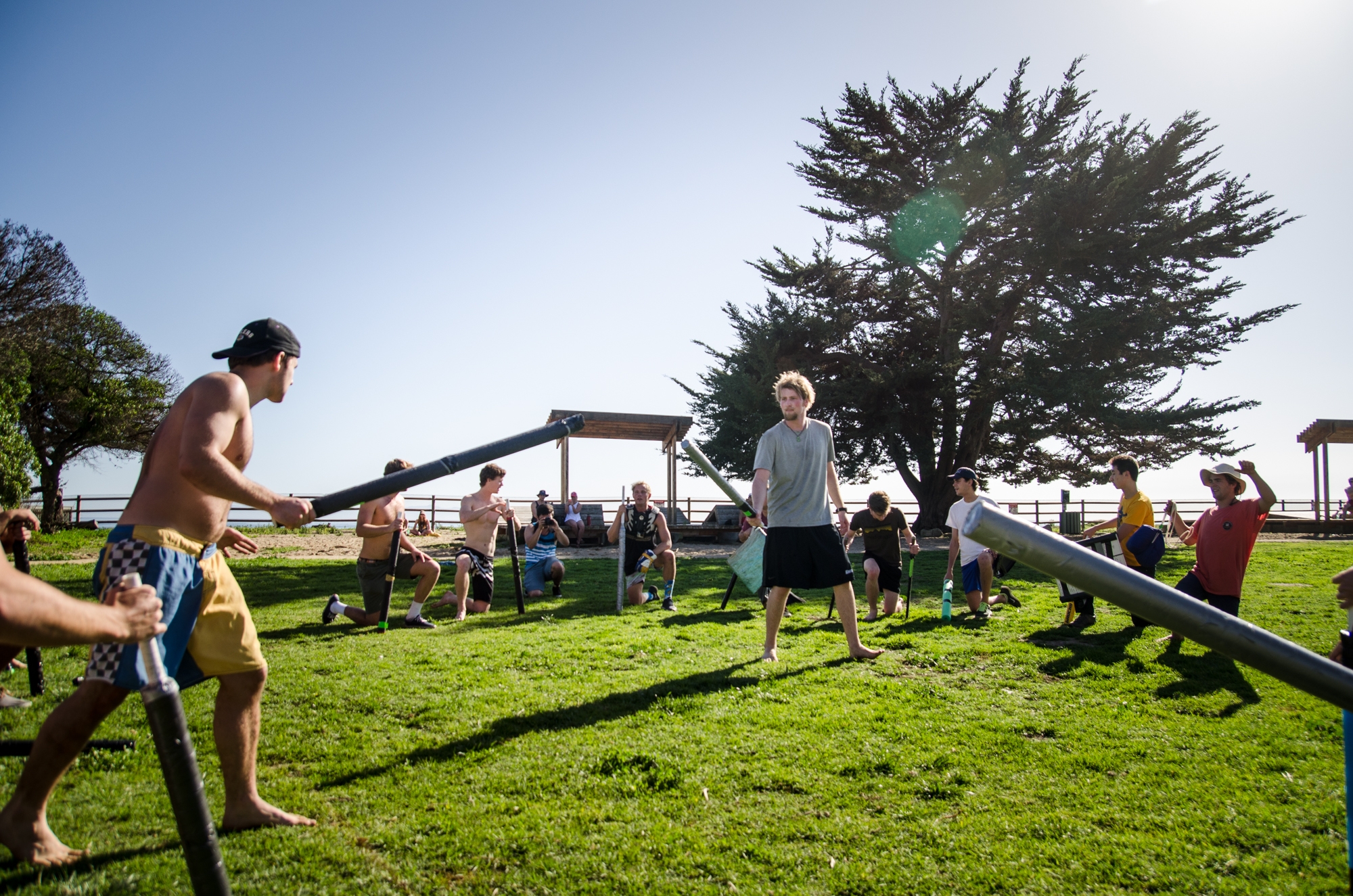 While LARPing can be complex, Frey said he wanted to streamline the rules to make it more fun. If players are hit in a limb, they “lose” that limb. A hit in the torso is deadly, forcing victims to wait until the next round to restore their honor.

“We took all of the really nerdy stuff out, like the magic and making nations and whatever,” Frey said, and brought the game “back to the original heart of it, which is beating the crap out of your friends. We thought that was ideal.”

Frey said he had tweaked the rules slightly since the last battle, a rainy one in winter 2015 that resulted in several injuries.

“We had a few bloody noses, I think a black eye, but it was gnarly,” Frey said. “It was fun, and people were all stoked about it.”

This year, all weapons had to go through a “weapons check,” and were wrapped in neon green tape, both for padding and to keep the swords intact. 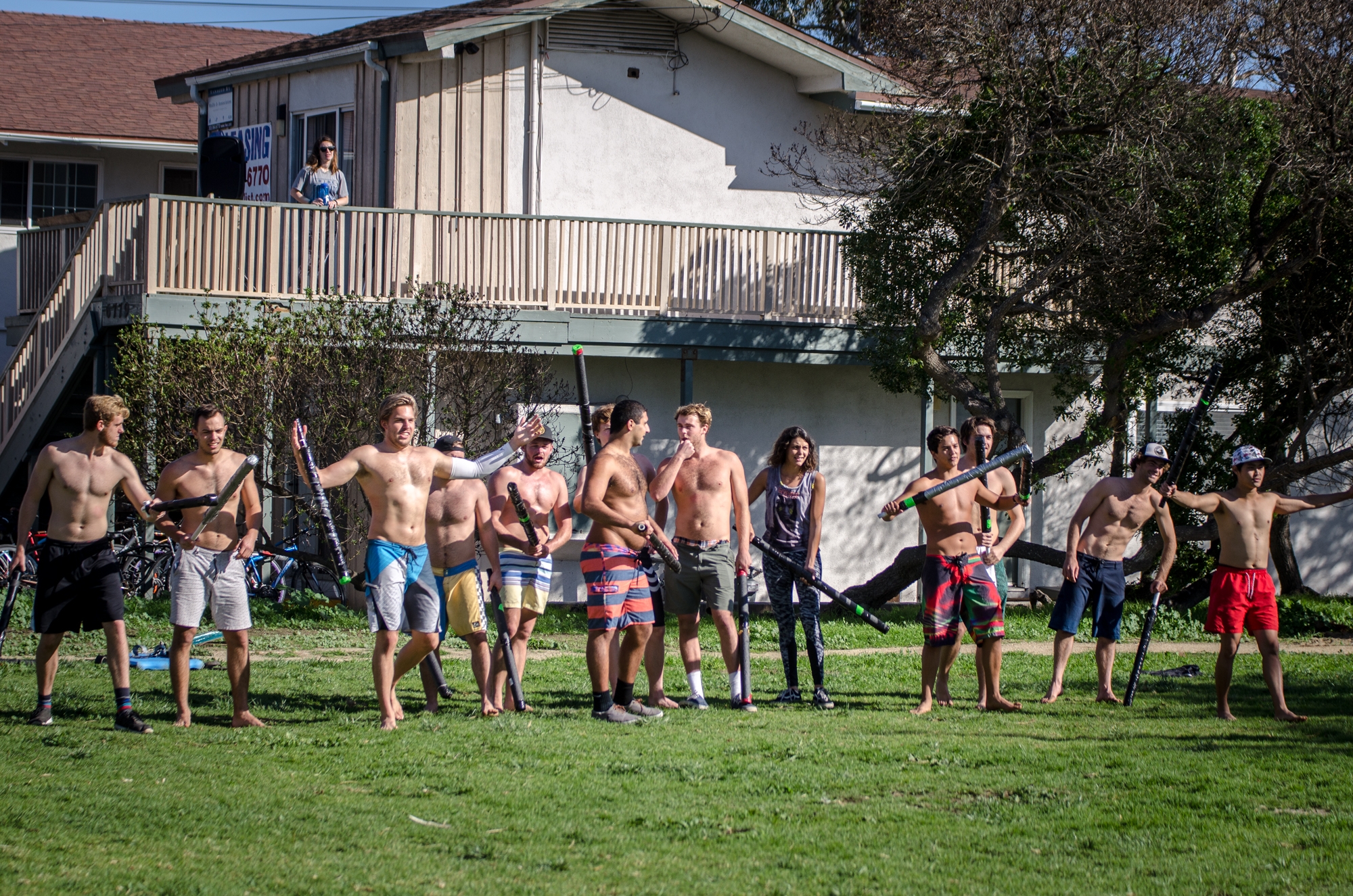 One team lines up, waiting for the battle to begin. Alex Nagase / Daily Nexus

Some of the rules were also updated during battle: “If someone is in an epic duel, do not tap them in the back,” Frey yelled across the park to the opposing team. “That is lame — do not interrupt it.”

The sun beat down on the sweaty, shirtless knights, forcing some to leave early. Others stayed, despite sore hands and minor cuts.

“My hands are really bruised,” said Liam Lenihan, a third-year anthropology major, after nearly two hours of LARPing. “So many people just got really exhausted really quickly because of how hot it was.”

As he left the park, Lenihan slung a makeshift mace over his shoulder, retiring it until the next battle.

“I came a warrior and left a scholar,” he said.

Awesome article! Hilarious writing, thanks so much Nick!