The Daily Nexus
Sports
Gauchos Able to Earn Third-Straight Victory, Win 65-55 on the Road at UCR
February 19, 2016 at 6:48 pm by Elliot Thornton 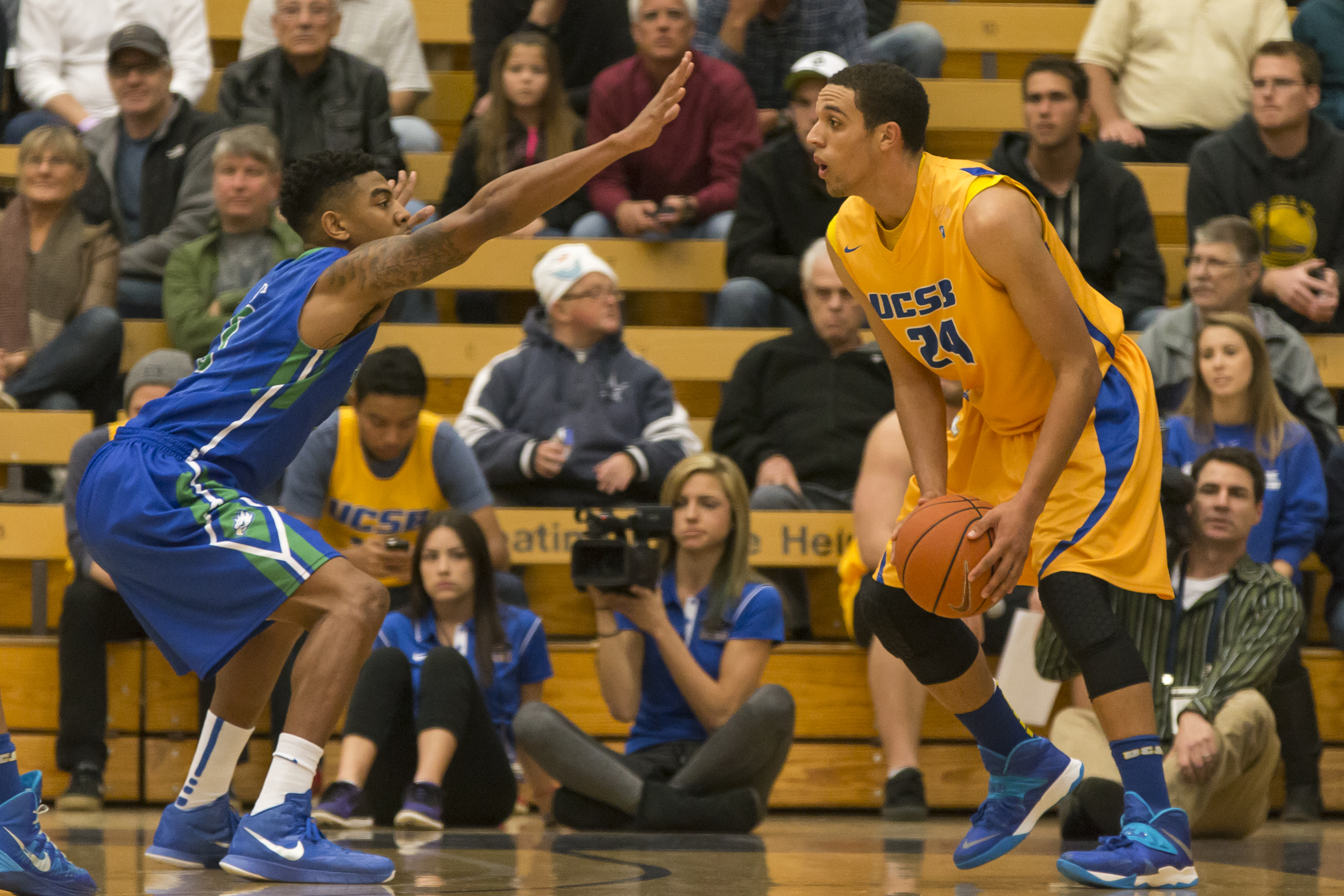 The Gauchos are finding their stride just in time with five games remaining until the start of the Big West Tournament. Santa Barbara was able to improve to 6-5 in conference play while it also reached the .500 mark and is currently 12-12 overall.

Playing without senior power forward Taylor Johns, UC Riverside lost its fourth consecutive game, dropping it to a 13-15 overall and 4-8 Big West record. Johns, sixth in the conference in scoring and third in rebounding, did not play in Thursday night’s game for unspecified reasons.

Santa Barbara was in control of the matchup from its first whistle. Seniors Guard Michael Bryson and forward John Green led the way for UCSB, scoring 11 of the team’s first 15 points to help set the Gauchos up with a 15-6 lead prompting them to never trail at any point of Thursday’s contest.

Bryson scored the first six points for UCSB, including a layup just 18 seconds into the game. Green came off the bench in attack mode, hitting a mid-range jumper and three-pointer all within the 11th minute of the first half. The two went 7-11 from the floor in the first half, playing a major role in UCSB’s 29-18 advantage at halftime.

Senior guard T.J. Taylor also added the exclamation point with seven seconds left in the first. Off a UCR turnover, Taylor went coast-to-coast maneuvering past a defender and hit a buzzer-beating three with one second to spare.

Taylor tied season-highs with eight points and four assists in nineteen minutes off the bench.

While the Highlanders had their troubles in the first half, shooting 7-28 from the field, guards Gentrey Thomas and Jaylen Bland helped turn things around. Riverside chipped at its 11-point deficit as Thomas connected on a three-point shot followed by a strong finish to the rim. This five-point swing helped pull the score to 32-30 with 16:40 remaining in the game.

Helping bring UCR within the Gauchos’ lead was the Highlanders’ senior captain in Bland. With 6:40 left in regulation, Bland knocked down his 100th three-pointer of the season, a Big West best, to trim UCSB’s lead to 50-44 with 6:40 to go.

While Bland entered Thursday with the fourth-best scoring average in the Big West of 16.5 points per game, the Murray State transfer did not have the most efficient shooting night from the floor, going 4-15 overall and 3-11 from behind the three-point line.

Bland has had a rocky scoring stretch during his past three games, averaging 8.3 points per game including a 1-8 shooting night and season-low five points against Cal Poly on Feb. 13.

With the Highlanders quickly on its heels, Santa Barbara converted at the free-throw line going 11-12 in the final six minutes to secure its victory. Overall, UCSB went 18-25 from behind the free-throw line, including the reliable foul shooting of senior forward Sam Beeler, who hit four of his six made free-throws in the last five minutes of play.

With the absence of Johns, the Highlanders relied heavily on junior forward Secean Johnson to keep UCR within reach. After losing his starting spot last Saturday to sophomore forward Alex Larsson, the Juco transfer had a monster game playing all but five minutes Thursday night as he led Riverside in scoring with 21 points.

Johnson recorded his second double-double of the season, grabbing 10 rebounds in the match—five offensive and five defensive. His versatility on the court resulted in him recording two assists, one block, and a pair of steals as well. However, Johnson’s performance was not enough to stall UCSB from earning its 65-55 win.

In addition to the Gauchos collecting their sixth conference victory of the season, Head Coach Bob Williams joined Pacific’s Bob Thomason and UNLV’s Jerry Tarkanian as the only coaches in Big West history to ever achieve 300 wins.

Santa Barbara will look to defend home court in a rematch versus UC Davis tomorrow, Feb. 20 as tip-off will begin at 7 p.m. in the Thunderdome.