The UCSB men’s baseball team hopes to continue the success of last years’ historical season, including hosting its first ever NCAA Regional matchup, with its opening four-game series against San Francisco at home. 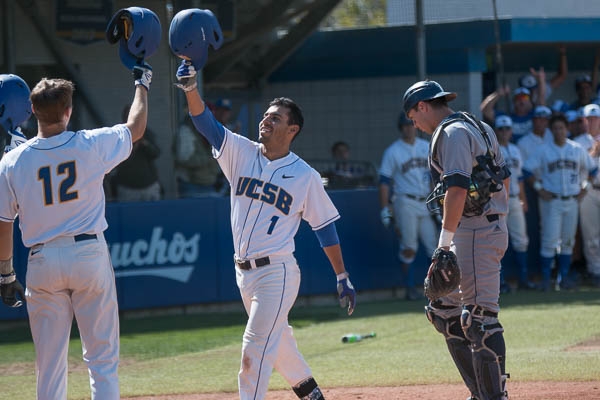 “We had a good run last year and this year we want to keep building,” Head Coach Andrew Checketts said. “We have a goal to get back to the playoffs, and with our returning key pieces I think we could do it.”

The Gauchos are coming off a 40-17-1 season in which they also had a successful run in conference play with a 16-8 record. The 40 wins was a new record for most wins against Division I opponents in a season. The preseason polls have UCSB finishing fourth in conference play behind LBSU, UC Irvine and No. 16 Cal State Fullerton.

Checketts, entering his fifth season as the Santa Barbara Head Coach, will have a much tougher time setting his line-up this season. This is because a record 10 of his players were drafted last year, including pitcher Dillon Tate, who was drafted fourth overall by the Texas Rangers. UCSB has the second-most draftees of any team in the country, only trailing Oklahoma’s 11 players drafted.

“There has been a lot of turnover on the roster,” Checketts said. “However, we are returning some key pieces.”

These key pieces include outfielder Andrew Calica and pitcher Shane Bieber. Calica is a career .321 hitter at the Division I level, while Bieber earned an All-Big West Second Team nod after co-leading the Big West in wins with 8 and a solid 2.24 ERA.

“I’m counting on them [Calica and Beiber],” Checketts said. “They’re Friday night starters and have experience, including playing in regionals last year.”

The Gauchos are also going to count on younger pieces such as sophomores Clay Fisher and Kyle Nelson. Fisher, an infielder, racked up 43 hits and 19 RBI’s, which were both seventh best on the team. Nelson, a left-handed pitcher, went 3-1 with a 0.75 ERA out of the bullpen to earn Freshman All-America honors.

“We are new in some spots and we are excited for the younger players,” Checketts said.

UCSB will hope to see its new roster do some good things against a San Francisco squad who finished 23-31 last season. They ended the season on a seven game losing streak, meaning they will be excited to take the field against UCSB.

The Dons are looking to players like infielder Dan James to lead the team this year. The junior had a .346 batting average, which was second best on the team. They will also look to former 2014 West Coast Conference All-Freshman Team Nico Giarratano. The junior hit a respectable .220 average in his 32 games.

The new Santa Barbara line-up is what will have most people excited this season. After losing the aforementioned 10 players to the draft, it will be interesting to see how new players feel in their roles.

“We still have a lot of question marks,” Checketts said. “There are still a lot of moving parts and we still are not sure of our exact lineup. We want to find ourselves and our identity, and it will take some time, but we are excited.”

A version of this article appeared on page 9 of February 18, 2016’s print edition of the Daily Nexus.