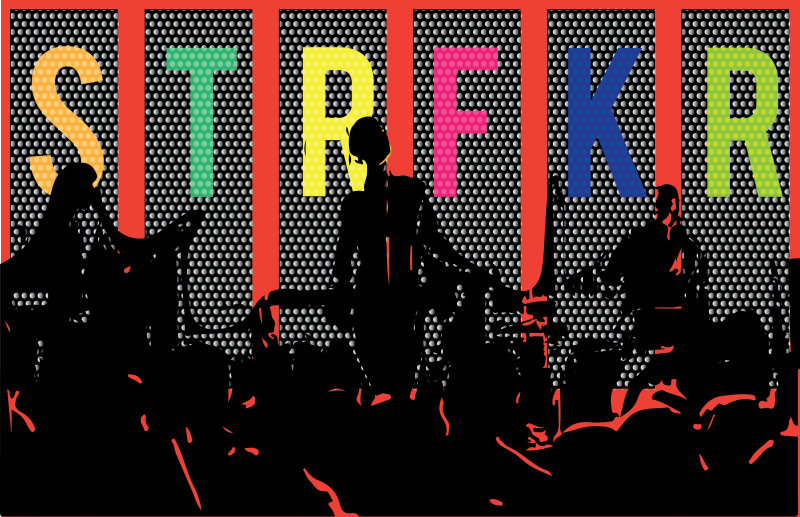 STRFKR is very serious about not being taken too seriously. Ironically lifting their name from the label slapped onto those willfully entrenched in the celebrity lifestyle they so eschew, STRFKR’s live set perfectly crystallizes their direct dedication to keeping things fun.

Fake Drugs started the show off with a set hurtling down a cyberpunk highway at 80 mph on a Tron bike. The electro-punk duo slapped some frenetic strings over new wave synths and squawked distorted, unintelligible vocals. While the Drugs maintained a high energy throughout, their show would’ve been greatly enhanced by the addition of a live drummer; without one, they lacked the rawness that an exciting punk act should exhibit. Though not all that compelling in and of itself, their synthy vibe served to whet the collective appetite for Com Truise, the second act of STRFKR’s winter tour.

Com Truise seemed to appear all at once, assuming his position helming an expansive dual-Macbook mixing station. Silent and stoic and clad in a plain black tee, he spun a pulsing set of his ’80s synthwave repertoire. Com Truise and the entire stage were highlighted over by melting geometries in neon pastels, unfortunately dim as a result of presumably deficient projector settings. Enthused audience members cast crude shadow puppets on the spiraling visuals, nipping and winking innocently at the unalterable DJ. After bumping back-to-back jams like crowd favorite “VHS Sex,” Com Truise departed coolly, without a word. His music spoke loudly enough to set the perfect palette for STRFKR to paint their vibrant poppy melodies with.

As the crowd shuffled with anticipation for the main event, a fog machine puffed out its haze incessantly, shrouding the stage in mystique. As STRFKR took the stage and began to play, the reason become clear; the six pillars of shifting light and color standing behind the band was allowed to play in the negative space, effusing a chameleon glow throughout the theater, perfectly timed with their upbeat rhythms.

The set was constant crescendo. Despite maintaining their grooving mellow throughout, the band managed to draw out more and more crazed feedback from their audience with every song. Draped in a velvet dress that could’ve been snatched from his grandmother’s closet, frontman Joshua Hodges crooned softly as his bandmates deftly riffed through their collection of indie poptronica tunes. The four appeared a little bit mismatched on stage, to charming effect. Pointing out each member individually, UCSB second-year Johanna Ramirez noted “That one looks like he came from a Renaissance faire, that one looks like a dad, that one a college dropout and that guy a high school student that plays in a band at night.”

Despite their quirky aesthetic differences, the band expertly meshed together sonically.

The four of them stayed playful throughout, not afraid to shuffle up their spots on stage. Hodges and drummer Keil Corcoran traded spots for “German Love,” and bassist Shawn Glassford joined the scramble for a trio of covers, including The Human League’s “Don’t You Want Me” and New Order’s “Blue Monday.” During their famous rendition of Cyndi Lauper’s (er, Robert Hazard’s) “Girls Just Want to Have Fun,” friends of the band arrived on stage decked out in spacesuits to launch confetti cannons from their groins. The rowdy astronauts also incited a spree of (excessive) crowdsurfing throughout the audience, much to the chagrin of the venue’s hyperactive security guards.

After blasting through hits like “Rawnald Gregory Erickson the Second,” “Malmo” and “While I’m Alive,” the band departed to clamorous roars from the audience. As a soft light hung in the foggy haze, recorded speech (presumably the words of Alan Watts, a big influence on Hodges) was drowned out by the calls of the crowd for more. The intermission stretched on, but the crowd was relentless, erupting ecstatically when the band resumed the stage to close the night out with an encore consisting of “Pop Song” and “Bury Us Alive,” culminating with a rock-star performance of “Leave It All Behind” among flaring strobes of darkness and white light. By the end of the set, Hodges lank hair stuck to his forehead, a facsimile of the turbo energy the audience channeled increasingly up to the very last song of the night. The band thanked their parents watching above in the Ventura Majestic’s closed-off balcony, and left the stage graciously to the applause of a crowd that’d just had a seriously good FKing time.