Professor Mark Juergensmeyer, Director of the Orfalea Center for Global and International Studies, spoke to students and faculty Tuesday evening at Carrillo Dining Commons about the rise of both the Islamic State in Iraq and Syria (ISIS) and Islamophobia in the U.S.

The discussion, part of UCSB’s Faculty Nights series, served as a forum for students and staff with different perspectives to engage in conversation about the conflict in Iraq, the Syrian Civil War and the resulting refugee crisis. The event was co-sponsored by UCSB’s Veterans Resource Center and student veterans and staff, some of who served tours in Iraq and Afghanistan. 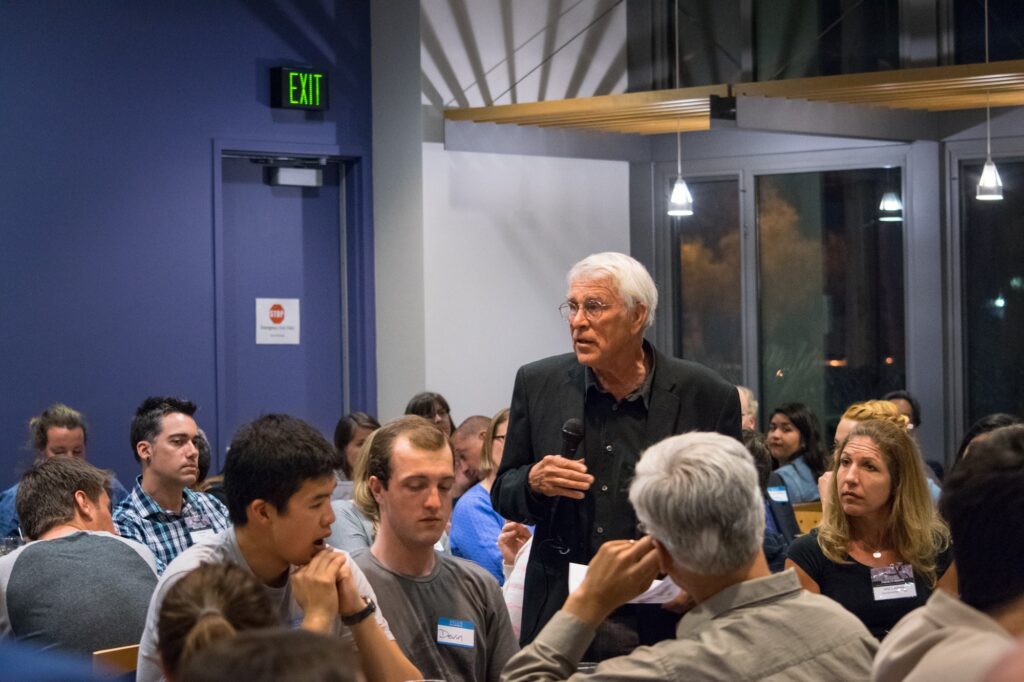 ISIS has been the focus of international media since 2013, after its leader, Abu Bakr al-Baghdadi, formed the group following separation from al-Qaeda and the al-Nusra Front. According to a 2015 report, the United Nations believes ISIS is holding over 3,500 people as slaves and is responsible for the displacement and deaths of tens of thousands of civilians.

Juergensmeyer opened the talk by discussing his recent experience interviewing refugees in Erbil, Iraq who were fleeing ISIS, which he said opened his perspective on what ISIS is and who is supporting it.

Juergensmeyer recounted the tale of a refugee policeman whose cousin had joined simply because he was making more money than if he was fighting in the Iraqi army.

According to Juergensmeyer, the November terrorist attacks in Paris were a way for ISIS leader Abu Bakr al-Baghdadi “to show others that the war is real.”

“He [al-Baghdadi] can go to Paris and put on a pretend war, and suddenly, he’s back in the headlines,” Juergensmeyer said.

Juergensmeyer said for al-Baghdadi, recruiting foreigners to fight for ISIS in Iraq and Syria has been an effective strategy.

“Al-Baghdadi is bringing them there as an intimidation force so that he can control the Sunnis in the region from rebelling and turning against him,” Juergensmeyer said.

Juergensmeyer said although it is still present and dangerous threat, ISIS has recently lost momentum.

“Not only did ISIS lose territory in 2015, but young people are fleeing from ISIS in droves,” Juergensmeyer said.

“One of my goals while I’m here is to make our community more visible, and I view this as a really good way to make us more visible, not only to faculty, but to students at UCSB,” Peck said.

First-year global studies major Charlie Wang said he took a global studies course with Juergensmeyer and considers him an authority on the issue of global terrorism.

“Professor Juergensmeyer was very knowledgeable about different issues going on around the world, especially ISIS,” Wang said. “It was also very interesting to hear all the different perspectives from the different professors in different departments.”

Second-year global studies major Nathan Garrido said he attended the event in pursuit of information on ISIS and its global influence.

“The topic that was discussed is super relevant right now — it’s not a conversation that has been going on long enough and we have not had enough people involved,” Garrido said. “It was a great way to get faculty to interact with students and have this open discussion.”

So I am going to assume the good professor’s family is from a northern European country based on his last name. So let’s look at the real world instead of the professor’s highly theoretical world to help us better understand reality. We will ignore Germany other than to note that something like 1,000 women were molested and even gang-raped in several different cities as this is evidently the way Muslim men celebrate New Year’s Eve with infidel women. Let’s instead look at Sweden today. Sweden has been led by socialist and liberals (like the good professor) for decades. These liberals… Read more »

Let me add one more comment. It really offends me when pie-in-the-sky professors call people like me phobic when in fact it is they who are simply being stupid. I have studied Islam from its inception in Mecca to its prophet’s ugly transformation of it when he moved to Medina up to the present day. And let me tell you it is not phobic to call Islam a vindictive, sadistic and misogynist religion. It is the truth not a phobia. Islam spread through violence just as it does today. The rape and plunder of Sudan in the 1990s was no… Read more »

Kind of obvious you did not attend this event