The Daily Nexus
News
Lois Capps, Veterans Lecture on Condition of Vietnam War Veterans
February 17, 2016 at 5:00 am by Sonia May Htoon 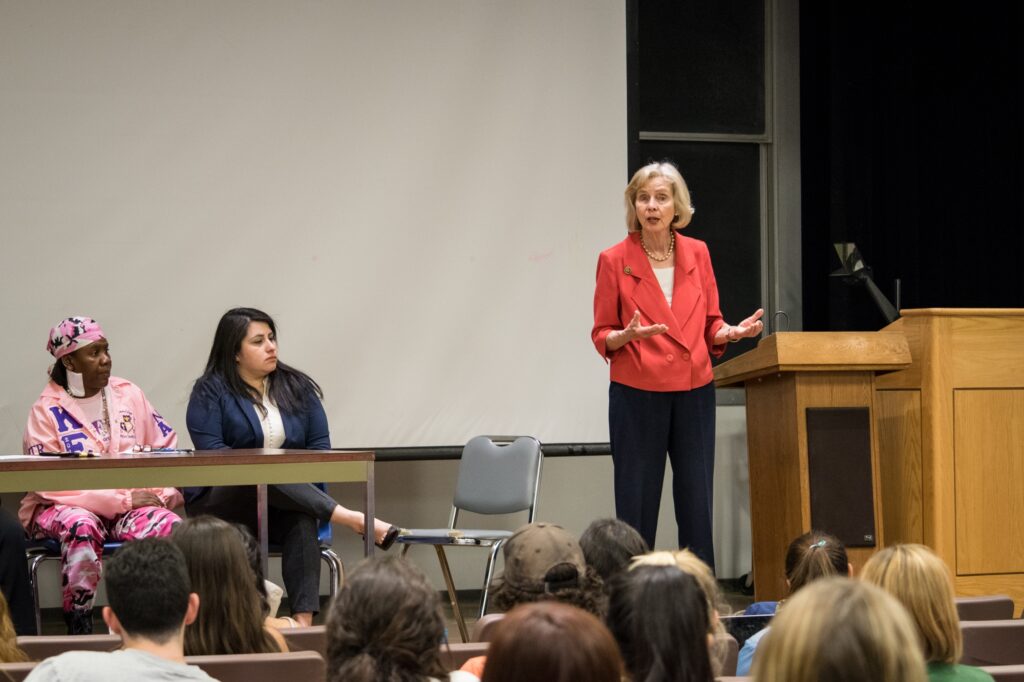 Congresswoman Lois Capps hosted a guest lecture in The Impact of the Vietnam War on American Religion and Culture course (RG ST 155) on Tuesday, accompanied by a panel comprised of mostly female United States war veterans to discuss the current condition of Vietnam War veterans in the United States.

Representative Capps said many Vietnam War veterans were not treated fairly when they returned from service.

“Some [veterans] hid up in the hills. There was no re-entry program. There was no phrase ‘post-traumatic stress disorder,’” Capps said. “They were alienated, disoriented, couldn’t talk to their families, couldn’t speak to anyone about it. So some fought back, some withdrew and it wasn’t healthy.”

Capps said her husband Walter started teaching the course during a time of tension caused by the negative public reactions toward the war.

“There was an era of time when he had to walk through smoke in Isla Vista to get to class. The Bank of America burned. It was wild. It was violent. The country tore itself apart over this war,” Capps said. “And who were the victims? The soldiers. The people who had nothing to do with causing it or the impact that it had on society.”

McGrath is currently a volunteer at the Veterans Treatment Court in Santa Maria, California. She described the conditions of the veterans that typically come in for help and what she does for them.

“They’re still suffering … they have serious problems, they encounter the law,” McGrath said. “Rather than go to jail and serve time for no constructive reason, Judge Flores created the Veterans treatment court … in that court we get to see the PTSD … Times have changed and they get professional assessment.”

McGrath recounted her time in the service, saying, “Out of 12 years of Catholic School with the Irish nuns, going into boot camp was a piece of cake.”

US Navy Officer and third class dental technician Janice Summers discussed the progress of veterans today and the support system established to help other veterans.

“A lot of them [veterans] are actually giving back,” Summers said. “Yes, it was a terrible time. Yes, I was spit on. Even after the riots … even after our barracks got raided on … you have to move forward. If you have a situation, you can never let it get the best of you.”

Turner said veterans need the help of the public and of those around them to overcome their traumatic experiences.

“I ask you to remember us and to help support us — not financially, because most of us don’t want nothing. There’s nothing you can give me,” Turner said. “But to support us with love, dignity and compassion that we’re entitled to, that we picked up arms to do for you.”

Veteran Wilson said he still suffered as a veteran of the Vietnam War through a form of unique cancer caused by exposure to the warfare herbicide, Agent Orange.

“I was killed in Vietnam, I just haven’t fallen yet,” Wilson said.

At the end of the discussion, Representative Capps was given a coin in celebration of American women in military service.