The Daily Nexus
News
College Republicans and UCSB for Bernie Hold Debate
February 17, 2016 at 12:28 am by Hubert Zhang

More than 80 students filled the Flying A room of the UCEN Tuesday to attend a formal debate between representatives from College Republicans and UCSB for Bernie.

After months of negotiations, the two groups, each represented by two debaters, held an event to discuss the feasibility of a higher minimum wage and tuition-free public college. The debate began with the issue of whether the federal minimum wage should be raised from $7.25 to $15.00 over the next several years, and ended on the topic of public university tuition. 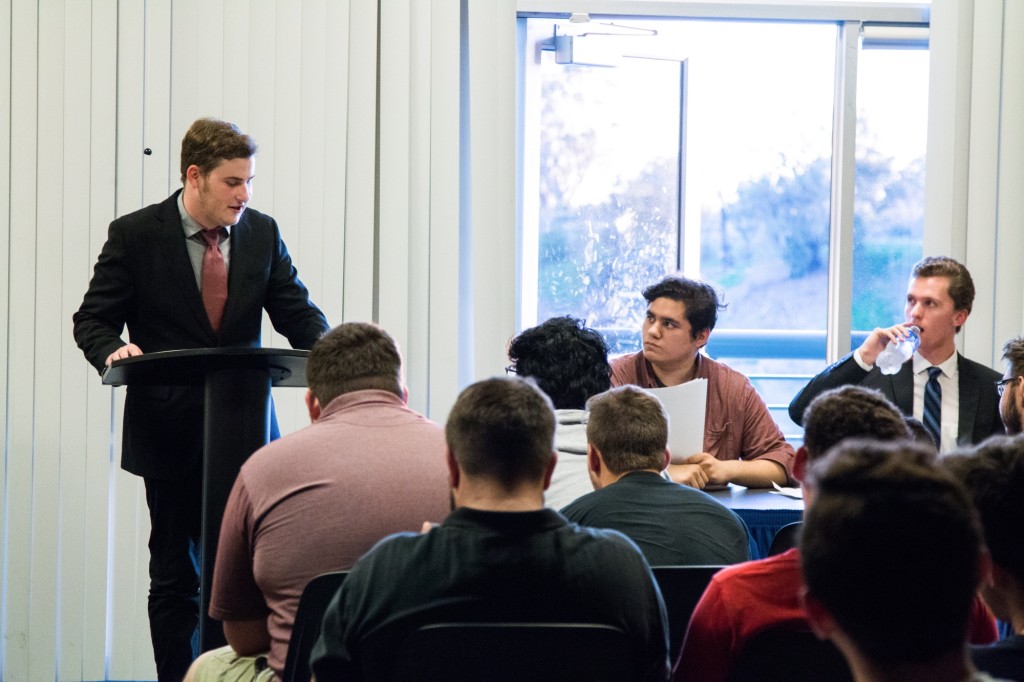 Andrew Gates, second-year economics and accounting major and member of College Republicans, began the debate by questioning the demographics of minimum wage workers.

Gates then cited the U.S. Department of Labor to claim minimum wage has negative effects on the economy and employment.

“A 2013 study by the Chicago Fed [Chicago Federal Reserve] found that increasing the minimum wage even just to $9 an hour would increase consumer spending by $28 billion,” Villalobos said. “It frees up money from the employer and from the business and makes it goes into the lower wage workers’ pockets.”

Villalobos said raising the minimum wage can lead to an increase in employment.

Ron Papile, third-year economics major and executive director of College Republicans, responded to Villalobos’ claim by citing studies on labor and the food industry that show prices rise with wages.

“A 2007 study from the federal reserve bank of Chicago found that restaurant prices unambiguously increased in response to minimum wage,” Papile said. “Furthermore, a study by the German Institute for the Study of Labor found that, especially in fast food restaurants, roughly two-thirds of the minimum wage increase would actually lead to price increases.”

“Think about something like McDonald’s or Taco Bell, where you have a product that costs only $1 to buy – a $1 burger or taco,” Papile said. “The only reason that the prices are so low is because they’re matching the benefits they can get to the cost of creating the products.”

Guy Singer, third-year biopsychology major and co-chair of UCSB for Bernie, had the last word on the issue of minimum wage.

“600 of the nation’s most prolific economists authored a collective letter in 2014 supporting the notion that reasonable minimum wage increases had little or no effect on employment,” Singer said. “Even from the small business owner’s perspective there’s quite a tight consensus on raising the minimum wage.”

The debate then shifted to the issue of whether or not public universities should be tuition free.

Villalobos began by arguing that free tuition is not a new concept and has been implemented in many countries.

“The campaign would like to argue that this is not a radical idea; last year Germany eliminated tuition because they believed that charging students $1,300 dollars per year was discouraging Germans from going to college,” Villalobos said. “Next year Chile will do the same, as will Finland, Norway, Sweden and many other countries around the world.”

“The formula for setting student loan interest rates would go back to where it was in 2006,” Villalobos said. “If this plan were in effect today interest rates on undergrad loans would drop from 4.29 percent to just 2.37 percent.”

“As government subsidizes tuition, the cost of tuition increases proportionately,” Gates said. “The federal reserve bank of New York found that tuition and fees increased in proportion to the number of eligible students.” 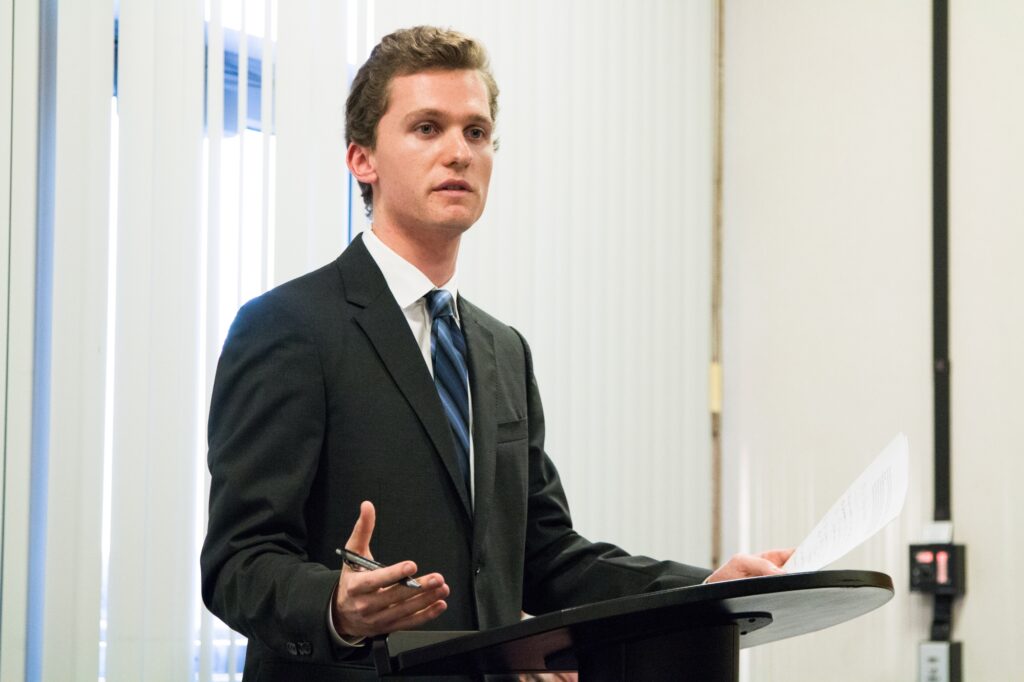 Gates also compared the concept of free tuition to the recent housing bubble and subsequent crash.

Singer responded by saying capable students should have the right to attend the colleges of their choice, regardless of income.

“If you get accepted you should have the right to go to that university regardless of how much money your parents make,” Singer said. “The way we lose scientists and technological advancement is by selecting who gets to go university based on income.”

Singer then defended the idea of socialism in public education.

Papile said the large increase in students at universities would negatively impact the ability of students to take impacted classes.

“Graduating with a bachelor’s degree in six years is actually about 59 percent of students, which to me is a very shocking statistic and shows how impacted classes currently are and how difficult it is to get them,” Papile said. “If we flood colleges with more students, it’s only going to make classes harder to get into.”

Emily Anne Williams, a first-year linguistics major, said she thought the debaters were well-informed and prepared.

“I think both sides did very well,” Williams said. “I heard a lot of statistics thrown around, which I think most college students don’t know about, and it was nice to see four people who actually did research.”

Daniel Reardon, third-year physics and philosophy double major and president of College Republicans, said he was happy with how the speakers handled the debate.

“I was very pleasantly surprised and, honestly, there aren’t many ways it could have gone better,” Reardon said. “Nobody couldn’t answer a question, everyone was very well informed on the topic and I’m happy with how it went for both sides.”

Emily Humpal, a third-year political science major, said she thought having the two clubs debate was beneficial for the student community.

“I think it’s great that we have the two clubs coming together because we don’t have a lot of students active in the political arena,” Humpal said. “These issues affect us, and I think a lot more people need to know that.”

[Correction: An initial version of this article listed the name of College Republicans’ executive director as Ron Kapeel, when his actual name is Ron Papile. Also, the article states the debate addressed whether the federal minimum wage should be raised from $7.25 to $15.00 over the next 8 years. However, the topic was an increase over several year, not 8 specifically.]

Just a small correction to the names: Ron Papile and Emily Humpal

You might want to double check the names the next time around. At least 3 of them are incorrect. Ron Papile, Emily Humpal, Emily Anne Williams.