Organizers estimate more than 600 students from all University of California campuses and nearly every California State University will travel to UCSB from Feb. 12-15 for the 12th annual Afrikan Black Coalition Conference.

The Afrikan Black Coalition (ABC), founded in 2003, is an organization that represents black students in California. The coalition has rotated its conference among the UC campuses since 2004 and was last hosted by UCSB in 2007.

This year’s events include lectures from David Banner, a Grammy-nominated producer, rapper and activist; Melina Abdullah, professor of pan-African studies at California State University, Los Angeles; and Bree Newsome, an activist best known for scaling a flagpole and removing a Confederate flag outside of the South Carolina State House. There will also be professional workshops, a career fair, a glow-in-the-dark party in The Hub and more.

Rapper and activist Chuck D was originally scheduled to lecture, but had to cancel due to a death in his family, organizers said. Rhymefest—a rapper, songwriter and politician—will now be performing at 4 p.m. Saturday.

UCSB said in a statement that the conference will end with the unveiling of a historical mural at North Hall documenting the day, in 1968, when black students took over North Hall. The students, in October 1968, covered the building’s name with a sign reading “Malcolm X Hall” and demanded an increase in black student enrollment and representation. The takeover ultimately led to the establishment of UCSB’s Department of Black Studies.

Anthony Williams, editor-in-chief of ABC and a student at UC Berkeley, said the conference is “a show of blackness at a place like UCSB where black students might feel isolated.”

“It’s good to have a weekend where [students] can be supported, be black and be proud,” Williams said. “As an organization that represents black students all over California, we want to build solidarity across each other and across the diaspora.”

In the 2014-2015 academic year, black students comprised just under four percent of the undergraduate and graduate population at UCSB. 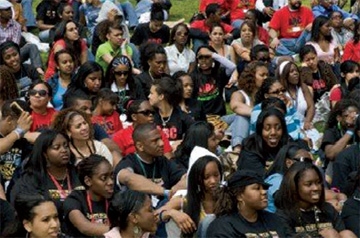 “Planting the seeds of our future, defining our next steps” is the theme of this year’s conference, and Williams said one of the primary goals is “to hear from students the issues directly affecting them. We want to hear how, as an organization, we can help.”

Katya Armistead, associate dean of student life and the coalition’s primary advisor at UCSB, said in a release that UCSB students worked hard to prepare for the event.

“The UCSB ABC committee has been working tirelessly to create an experience to remember by focusing on a program that builds community, educates and celebrates the contributions of Black leaders,” Armistead said in the release.

In December, the University of California sold off approximately $25 million that it had invested in private prisons after pressure from ABC and Black Student Unions across the UC system.

Blake Simons, deputy communications director of ABC and a student at UC Berkeley, said the push for UC to divest from prisons was part of “a rebirth of black power activism on campuses” throughout the country, and that it brought “national attention to what black students are doing and what they are capable of.”

“Folks who may not have known about us before are very aware of us now and are trying to help out any way they can,” Williams said. “That has helped our students to see how amazing we can be as black organizers.”

“There’s definitely a momentum, and that is a beautiful thing,” Williams said.

Similar event that would’ve been held in a City venue this weekend in Fresno was cancelled reportedly at the insistence of local police. The City pulled the permit.