The Daily Nexus
News
Students Suspect Increase in Bike Citations
February 11, 2016 at 5:04 am by Nicholas Bogel-Burroughs 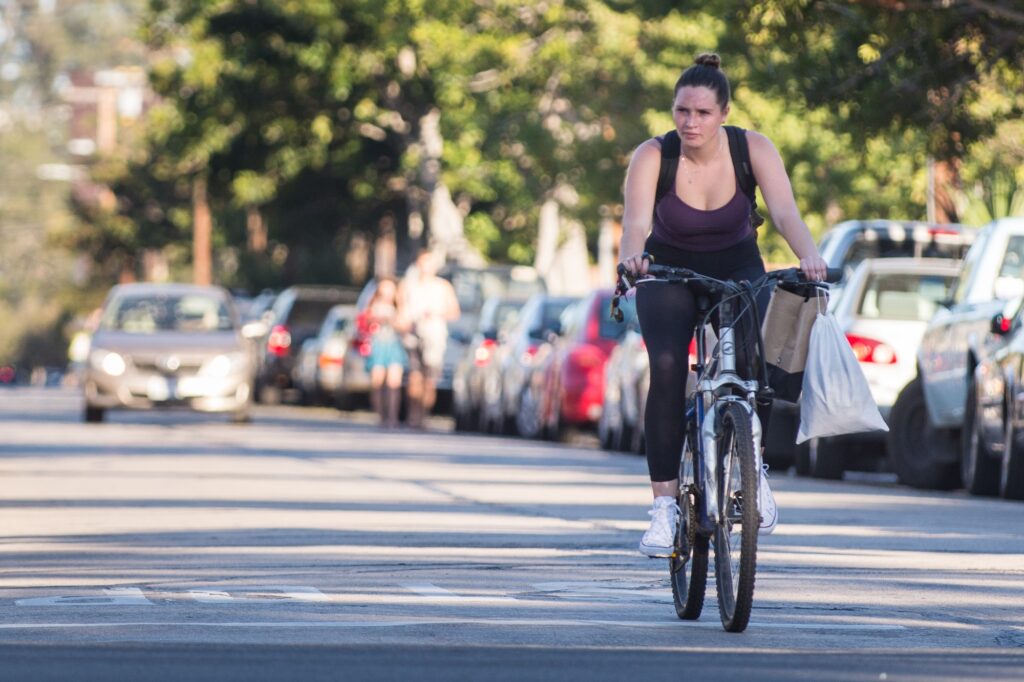 The new resolution is designed “to keep the status quo,” and refers to a 1982 Idaho statute that allows bicyclists to roll through stop stop signs after looking both ways. Lorenzo Basilio / Daily Nexus

Ricky Waltman was biking to work early Tuesday morning when he approached a stop sign at the corner of Camino Del Sur and Trigo Road. A California Highway Patrol car was parked on the side of the street, but Waltman didn’t think twice about breezing through the intersection on his bicycle.

“There were no cars on the road and it was 9 a.m.,” said Waltman, a UCSB alumnus. “I slowed down and didn’t stop. I’ve done that plenty of times in front of a cop.”

Moments later, the patrol car’s lights flashed on and an officer cited Waltman for failing to stop — a $270 fine for the first offense, according to the Santa Barbara Police Department.

“‘We are cracking down on it to hopefully make you guys more safe,’” Waltman recalled the officer saying. As Waltman pedaled away from the curb, he saw the officer pull over another bicyclist for running the same stop sign.

While Waltman and other Isla Vistans say there has been an increase in citations for bike offenses, Officer John Gutierrez of the Santa Barbara Police Department said there is no effort by highway patrol officers to write more tickets.

“We’re not told to go out there and write up bicyclists — not at all,” Gutierrez said.

The police department will be hosting a bike safety event on March 2 at the Pardall Center, after which, Gutierrez said, there may be a “ramped up increase” in citations.

Gutierrez pointed to recent bike accidents in I.V., including a two-bike collision on Pardall Road in January that sent one person to the hospital, as evidence of the need for bicyclists to follow traffic signs.

“A lot of people are riding bicycles unsafely in I.V.,” Gutierrez said.

Off-Campus Senator Jerel Constantino, who drafted the bill, said because so many students already ignore the bike laws, the bill is designed “to keep the status quo.”

“The crackdown on bicyclists is unreasonable, because I.V.F.P. will be very strict on biking rules . . . and then will disappear,” Minoiefar said. “I don’t think the crackdown is about safety, because the rules are not enforced consistently.”

The resolution refers to a 1982 Idaho statute known as the “Idaho stop,” which allows bicyclists to roll through stop signs, after looking both ways, and to bike under red lights after stopping.

Constantino, third-year history of public policy and political science double major, said he bikes to campus from I.V. every day and drafted the bill to protect bicyclists “from a misguided prioritization of law enforcement.”

The resolution also calls for the California State Legislature and Gov. Jerry Brown to institute a similar law statewide.

Shortly after Waltman was cited, he posted a picture of his ticket on a popular UCSB Facebook group, warning other bicyclists that officers were enforcing the law.

Minutes later, he was at the center of a spirited debate in the comment section about whether police should ticket bicyclists for failing to obey traffic signs.

While some commenters assumed Waltman disagreed with being cited, he said he “totally deserved” the ticket.

“I know it’s a little inconvenient to stop and go on a rusty old mountain bike, but when you have a culture where nobody stops and people just throw themselves into intersections, it’s dangerous,” Waltman said.

Elena Rovito, fourth-year biological anthropology major, said she often bikes to class and to restaurants in I.V. Rovito said she always follows the traffic signs, but when she walks, she has to be aware of bicyclists who are not following the law.

“You have to constantly be on your toes,” Rovito said. “You’ll see people biking, not looking both ways, texting, and I’ve had to jump out of the way on more than one occasion.”

Sarah Garrett, first-year political science major and copy reader at the Daily Nexus, was ticketed recently for failing to stop at the corner of Camino Pescadero and Trigo Road. Garrett said she plans to enroll in a bike safety course to reduce her fine.

“I didn’t think anything of it because, a couple days before, I had blown through a stop sign by a cop and nothing had happened,” Garrett said.

The officer told Garrett that he was trying to keep her and other bicyclists safe, but she said stopping at some intersections can be more dangerous than passing slowly through.

“I feel like it would be more of a hazard to stop at certain stop signs because no one is stopping and I feel like herds of bikes might run over me,” Garrett said.

Garrett now tries to avoid biking through I.V. by staying on El Colegio Road for as long as possible. When she has to bike through I.V., though, she said she stops at every stop sign to avoid another ticket — or at least slows down and puts her foot on the ground.

At a recent public meeting on “IV safety” it was announced the invisible government had declared that by virtue of years of neglect, fiscal robbery and reckless over & under development; the invisible government will suddenly increase revenue and perhaps safety by sticking it to unwary cyclists. The public was assured that hatred of the invisible government and local cops tasked with enforcement would be mitigated with a an adequately lengthy and effectively organized public education period for all the riders and drivers affected. From this article it may be assumed the rush for enforcement and revenue has already commenced… Read more »

The phrasing for why they passed the resolution is moronic. “We request that you stop punishing us for breaking the law because we have always broken the law and we don’t want to change that!” I’m all for the Idaho stop as long as people actually follow the law. Right of way doesn’t magically transfer to bikes under that law so you’ll still have to stop if there are cars with the right of way. Most of you aren’t going to do that and you’ll still (hopefully) get tickets for it. It’s scary how many close calls I’ve seen with… Read more »

this measure wouldn’t have been met with resistance if people didn’t just blow through stop sign intersections as if they were invulnerable so often. making stop signs into yield signs for bicyclists doesn’t address the real issue of irresponsible cyclists. sensible cyclists get penalized for the idiots who throw themselves in front of cars/people/other cyclists.

once that becomes a non-issue, by all means, make the stop signs into yield signs for cyclists.

Agreed, you all don’t deserve the Idaho stop. Cracking down really is the only way to get people to change their behavior. Awareness campaigns sure as hell haven’t worked.

Hey I’m the first on this resolution. I submitted a draft resolution to the Nexus with our working title. Which reflected the Idaho statute. The name was changed during the meeting last night, and it wasn’t caught by the Nexus. It will be voted on as A Resolution Calling Upon Law Enforcement to Lower Prioritzation of Cyclists Yielding to Stop Signs

The bill also hasn’t passed in Senate yet. It’s in the External Affaitrs Committee.

I get that no one wants citations but why create a resolution that encourages more people to get hurt?

This resolution has passed in the External Affairs Committee. It is now headed to the AS Senate Meeting for approval. I invite all who would like to voice their opinions on this resolution to attend the meeting at Wednesday, 2/17 at 6:30 PM in the Flying A Room. I am looking forward to answering your questions and having a discussion. Attached is the resolution that will be voted on by the Senate. View the updated resolution here: https://drive.google.com/file/d/0BxcSdJTGEnMCOFJvZHl6d19xVXM/view

San Francisco’s mayor vetoed their attempt at this citing safety. Given the large number of cyclists who behave like idiots when riding, this (the resolution) is a horrid idea. Only way I might support it would be if vehicle drivers were automatically absolved of any blame if they run over some dumb cyclist.