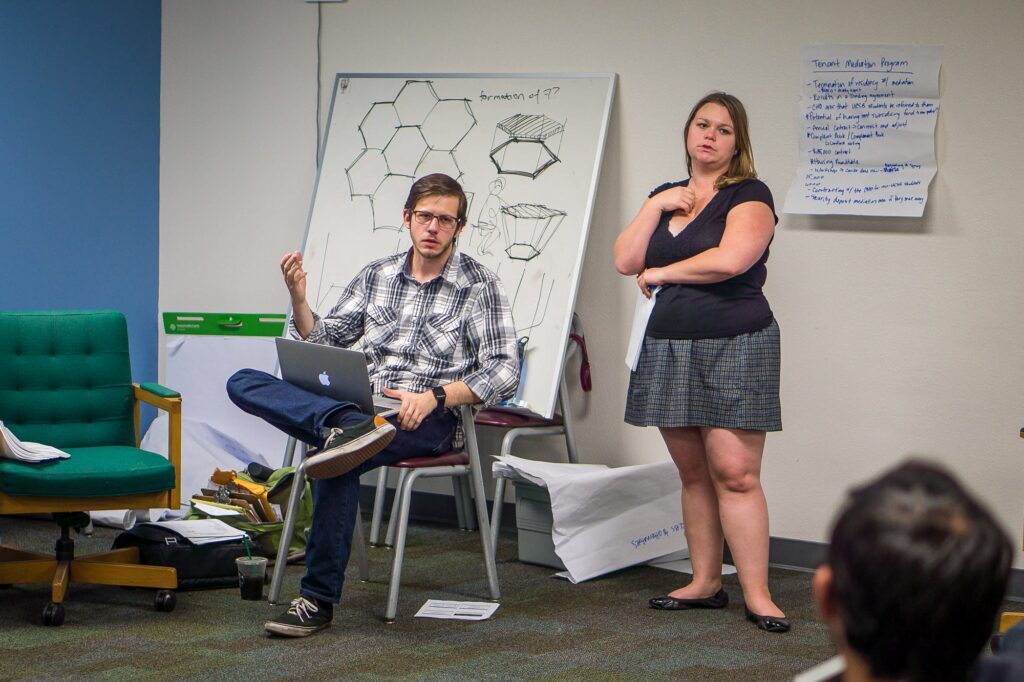 People from all over IV and the rest of the county meet to discuss ways of assisting tenants in resolving issues with landlords, including funds and mediation. John Clow / Daily Nexus

The Isla Vista Self Governance Initiative held a public meeting Tuesday at the I.V. Clinic building to discuss potential forms of tenant mediation in I.V. if it becomes a Community Services District (CSD) in the November 2016 county election.

The group met with Andrea Bifano, representative of the Community Development Department Rental Housing Mediation of Santa Barbara County, to discuss further plans for mediation. UCSB students, who have access to mediation through the University, are currently the only I.V. residents with such services.

According to Jay Freeman, who is running for Santa Barbara County 3rd District Supervisor, stakeholders should consider the fact that UCSB students already have free mediation at their disposal.

“Some of the tax money people are paying is to go towards this service that they are also getting from somewhere else,” Freeman said. “I don’t think we should fully discount them. The board will make a decision on who they want to serve. UCSB is not running this government.”

Carlos Lopez, fourth-year anthropology major and A.S. Lobby Corps director, said he is interested in a new mediation program that would educate renters on how to communicate with landlords about property maintenance.

“I think the ability to inform students on what their rights are when living in a house is good,” Lopez said. “There have been only a few situations when something might be going on in your house and you’re not sure if it’s your job or your landlord’s job to fix. For a lot of students who are only going to be living there for a year, it’s kind of easier to put up with it for a year.”

Lopez said it is important for renters to uphold open communication with their landlords about what to do if a property needs maintenance.

“Even in my house there was something wrong with our fence and one of our neighbors was talking about how when they called the landlord they got a way different response than when they went online to deal with the problem,” Lopez said. “So it’s good to establish some level of consistency in treatment on issues for tenants and the things that happen.”

Audrey Tamayo, a member of the Isla Vista Tenants Union and third-year political science major, said the University mediation program does not always take into account the point of view of everyone in tenant-landlord mediations.

“From my accounts with people that I know, the University’s program has not been as effective as they should,” Tamayo said. “Some of the problems include mediators twisting the words a bit, so in one instance where my friend and her roommate were having an argument and one of the tenants had pushed her up against the balcony, the mediator rephrased it as a push-shove fight. That implies a mutual kind of pushing and shoving, [but] it was only one tenant who was pushing.”

According to Tamayo, many tenants, including her own housemates, fear going to the University for help with mediation because they believe it will end in a lawsuit.

“I guess they are kind of scared in a way, since others are always saying that they’re going to sue you if you go do this,” Tamayo said.

Jonathan Abboud, Santa Barbara City College trustee and UCSB alumnus, said he appreciates that the program will provide safety for many tenants who oftentimes end up experiencing difficulty with legality.

“I appreciate hearing the fact that it ultimately can result in a legally binding contract or document,” Abboud said. “A lot of the times, dealing with landlords and property managers, you might come up with a spoken agreement, but when it comes time to resolve it, there’s another thing that ends up happening.”

The task force of mediators would be neutral between tenants and landlords, with discussions of creating workshops where all parties could come together to receive education on renting in I.V. The proposed tenant mediation would be incorporated into the eight percent Utility User’s Tax, which will be on the November 2016 ballot.