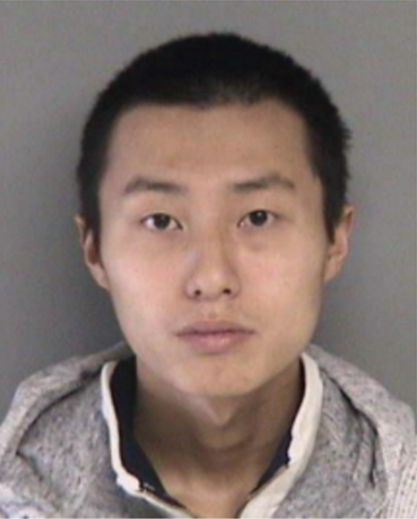 Daniel J. Chen, 21, charged in the 2014 rape of a UCSB student. Courtesy of UCSB Police Department

UC Santa Barbara Police arrested one man Wednesday in connection with the February 2014 violent rape and assault of a UCSB student.

Daniel J. Chen, 21, of San Ramon, Calif., was arrested by UCSB Police Wednesday and charged with four felonies: rape by means of force, violence, duress, menace, or fear of immediate and unlawful bodily injury; rape in cooperation with another person; battery; and false imprisonment.

Chen is being held in Santa Barbara County Jail without bail. He was arrested in Alameda County in January on an unrelated felony charge, according to the press release, and his DNA was matched to DNA from the crime scene, next to UCSB’s track.

Chen’s Facebook profile says he graduated from Northgate High School in Walnut Creek, Calif. in 2012. Chen attended UCSB from September 2012 to December 2013, according to UCPD.

The female victim was raped and assaulted by three men in the early hours of Feb. 23, 2014, after being taken from Isla Vista to a secluded location next to UCSB’s track. Shortly after the incident, UCPD released a sketch of two of the three suspects, depicting two Asian men.

The victim of the crime filed a lawsuit against the University of California in January alleging that the area of the attack was not properly maintained by the university, UCSB’s Police Department had not properly investigated the case and that UCSB “skewed” its sexual assault figures to attract prospective students.

In January, Tyrone Maho, an attorney for the victim, told the Daily Nexus he hoped the lawsuit would reinvigorate the university’s investigation into the assault.

“Our hope with this whole thing is not only to draw attention to what the university did to basically allow this activity to take place … but also to help with the appeal to find the perpetrators because it has been two years and UC police have not found the suspects,” Maho said in January.

Chen will appear in Santa Barbara Superior Court on Feb. 16.

pretty sure he was in lambada phi epsilon

I think he was a Zeta.

Neither of you have identified his name on a fraternity composite to support these claims of affiliation. “I think” and “pretty sure”, do not provide any validity to your statement whatsoever. Please do not defame these organizations with slanderous comments.

Lol you gotta be a bitch and write this anonymously?

pretty sure rapist is china

Pretty sure you is stoopid

this guy is for sure a lambda

He is a Pinapple.

My name is Mark Tran, UCSB Class of 05′ and proud brother of Lambda Phi Epsilon at UCSB. I would like to clarify the two erroneous statements below in regards to the suspect being a member of my fraternity and it’s not true. I have confirmed with brothers from that year and he has no affiliation to us. So to the two anonymous posters, please check your facts (bigotry, bias, and hate, too) before you try to slander my organization, trolls.

I know all the Lambdas that are here + ones that have graduated in the past 3 years. He is NOT a Lambda, or a PAPhi, OR a Zeta. Everyone needs to STOP accusing greek for this. It’s ridiculous.

There are still two suspects out there so don’t think that Asian Fraternities won’t be involved in this… You’ll be eating your words if any of your “brother’s” names comes out of this kids mouth when they interrogate his ass for the investigation. Expect more arrests to be made soon since they have finally found a suspect. Mark my words.

And you base this off what evidence Inspector Gadget? So anytime theres a rape the police should automatically bust down the door of every greek house or just when the suspects are Asian?

I see you Tran

i heard he was alpha zeta nu

Just cause he’s Asian doesn’t mean he belongs to an Asian frat. If he was white would you be naming these frats? Not all rapists are from frats either. These are terrible comments.

You is a person that have not learned english…ever

Do we know the race of the victim?

Why does it matter

What a fucking idiot. Not only is he a scum for what he did but how do you seemingly evade the feds and do something dumb like this to get caught? Feel invincible because you got away for 2 years for this crime?

To the other two perpetrators, I know you are reading this and you will get caught because of this idiot. Have fun shitting yourselves for the next week or two leading to your arrest and I hope you get raped in jail.

I went to high school with Daniel and all I can say is blame his parents. They were incredibly strict and expected way too much from him, so when he got to college he just went off the deep end.

pretty sure his parents being strict didnt make him a rapist

I don’t think it makes sense to “blame his parents.” I don’t give a fuck how strict your parents were…it is not an excuse to brutally gang rape and beat an innocent girl that just happens to be walking down the street at the wrong time. Plenty of people have strict parents and grow up to be perfectly normal, law-abiding citizens. Do not make excuses for this piece of shit scumbag. Thanks

I get that it’s hard to accept when you find out that someone you know/knew did something heinous, but … I’m definitely gonna blame him for it. Everyone’s parents fuck them up somehow. It is super sad he didn’t get the skills to cope with the world in a decent, not-raping-people way, but this was his terrible, terrible choice and I’m for sure gonna blame him — and honestly, hate him from afar — for it.

Blame his parents? Are you shitting us? This piece of shit, given this heinous crime, should be locked up for life imprisonment and get his in the end.

Lambdas are rapey. They’re not even suppose to exist because of the E raid few years ago.