The Daily Nexus
Music
Battle of the Bands Brings Large Turnout to the Hub
February 10, 2016 at 4:10 pm by Allie Graydon 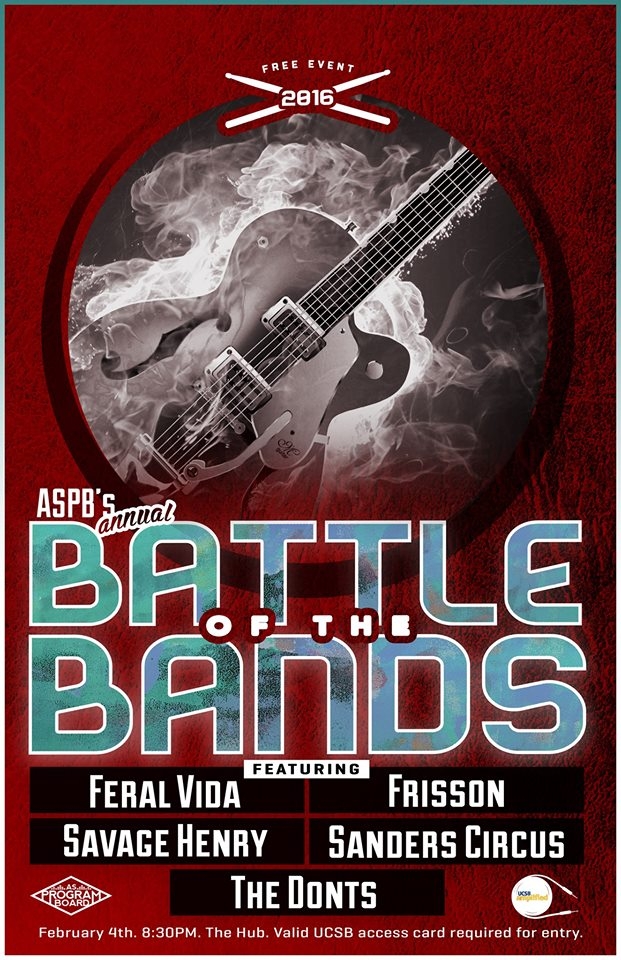 Rock & roll blasting through speakers, flashing multicolored lights and densely packed students jumping in every direction made Thursday night’s Battle of the Bands a beacon of excitement amongst a quiet campus. UCSB students escaped the looming threat of midterms for a few hours and rocked out to some of Isla Vista’s local bands at the Hub. The Associated Students-sponsored event gave five bands the chance to compete for a grand prize: a professionally recorded music video created by UCSB Amplified.

Students migrated from the beer garden to the crowd in front of the stage as the first band, Feral Vida, took the stage. Their friendly smiles were met with shouts of “Feral Vida!” from the growing mass of people. The band kept the cheers going with an upbeat tempo and Augie Houlemard’s loud, raspy vocals that filled the room. Both guitarists demonstrated their dexterity during their cover of Gnarls Barkley’s “Crazy” with long guitar riffs and drawn-out high notes. Feral Vida got the crowd jumping and ready for the rest of the night.

With a steady beat and mellow sound, Frisson created a more relaxed atmosphere. The slow guitar picking and lower vocals in their first few songs got the crowd swaying and nodding their heads to the beat. Many students made their way back to the beer garden to tap along from the comfort of their seats. The band picked up the pace later in the set with a fast beat and head banging that brought people back to the dance floor.

Kaitlyn Haberlin, smiling and wide-eyed, remarked, “The first two acts were really cool. I’m surprised at the skill and ability they have as artists. They’re super awesome and fun and they get the crowd excited.”

Savage Henry took the stage next, their sense of fun and humor revealed before they even began to play. They danced to the intermission music while onstage and playfully pointed their guitars at the audience. The set began with a chest-pounding beat and Wilder Kehke’s high, vibrato-filled voice. The sudden quickening of the drums and loud guitar chords incited mosh pits and crowd surfing as the two guitarists played face-to-face onstage. The lively group finished their set with a clash of smashing drums, squealing guitar and sweeping keyboard in an epic climax.

Sanders Circus came off strong from the start with loud, grainy electric guitar and calls of “Are you ready?” from guitarist and vocalist David Kuperman. During their cover of “Purple Haze,” Kuperman took the spotlight, dropping to his knees dramatically as he played. His guitar riffs played from behind his head sent the crowd into a frenzy while bassist Joe Barnes gave each song a full sound with funky bass solos. John Pagliassotti, a member of Savage Henry, said of Sanders Circus, “Oh yeah, these guys can really wail.” Lights flashed rapidly as the band finished with a flourish of cymbals.

From smooth, harmonious guitar to quick bursts of drums and bass, The Don’ts demonstrated their skill and versatility while the crowd chanted their name. Clear, lingering high notes and sliding guitar from both guitarists, Blake Elliot and Ben Seilhamer, created a dynamic sound. Smooth bass and mellow vocals from Mitchell Solkov quickly became a jarring blast of guitar and throaty belting as the song picked up in tempo. Multiple guitar solos and lightning-fast riffing from the two guitarists left the crowd cheering once again.

The Hub erupted in applause when Savage Henry, the winning band, took the stage. Kehke, all smiles, humbly approached the microphone, calling out to the audience, “Thank you for supporting our band, and supporting all the bands here tonight!” When asked about their performance, Pagliassotti replied, “It was great. We practiced this set like 10 times in the last week, so it was so easy to play the music that you just focus on having fun.” Drummer Will Hettel remarked with a laugh, “To put things in perspective we pretty much never practice, so it was a change in pace.”

The Battle of the Bands was a clear demonstration of the flourishing arts and music in I.V. Each band brought a unique aspect of performance to the stage, whether in their music or in the way they had fun onstage. With many different styles, personalities and talents, students experienced a night filled with variety all with the classic sound of rock and roll.