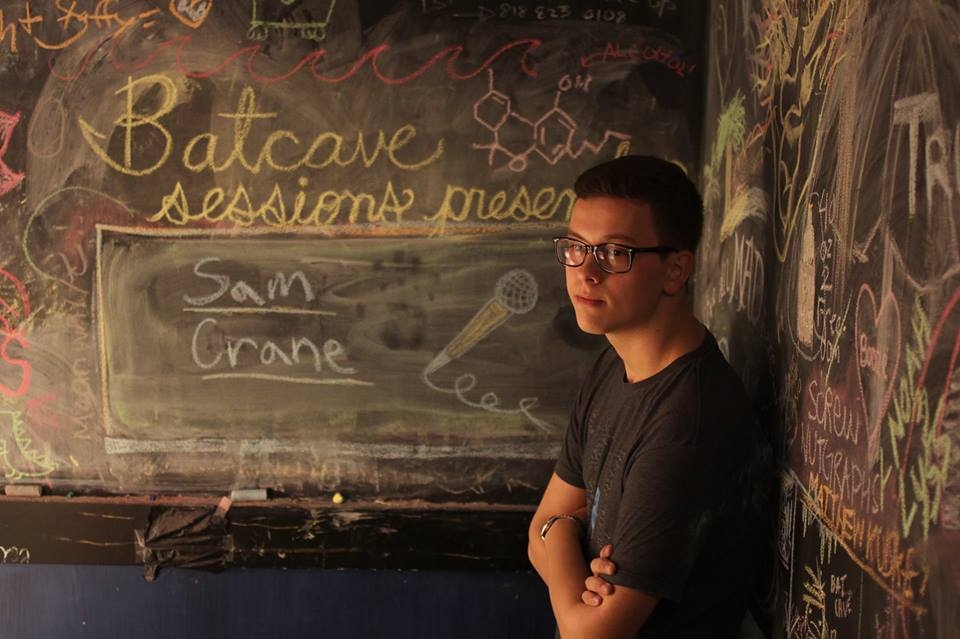 Aside from the occasional hungover student biking to the overloaded library or a bird cawing overhead, it’s quiet on campus on Sundays. Life—the buzz of students chatting with friends or bikers peddling to class—is missing. But on Sunday the 24th, nestled discretely below Storke Tower, the Daily Nexus Batcave was… well, live. This liveliness originated in a tall guy with short, brassy hair and a voice that filled the small chalkboarded room with warmth.

Sam Crane is a fellow student that, upon first impression, looks like any other peer. Dressed humbly in a grey, graphic tee and blue jeans, he was a familiar face; he could be that one guy you sit next to in lecture or that friend of a friend you met at a party. But of course, Sam is a hell of a lot cooler than that guy. After all, he is a poet.

The cameras rolled. “This is Sam Crane coming to you from the Daily Nexus Batcave. This poem’s called ‘The Perfect Picture.’” While all four cameramen worked to get the perfect angle, Crane’s voice demanded attention. His poetic flow was remarkable as he began to tell the story of the breakup of his last relationship, which his friends described as “perfect”.

Nowadays, you can hear his poetry at Poetry Club. However, college is not where he began his poetic journey.

“My high school had this really dope poetry program and they competed in an event in Chicago called ‘Louder than a Bomb’ where they take [spoken word teams from] high school districts and put them all together for this one giant slam,” Crane said.

Onto the stage walked Nate Marshall, a fellow Chicago poet who has earned his fair share of accolades in the poetry world on top of releasing his own rap album. “The last piece the school performs, they usually perform together,” Crane continued. “Nate Marshall got to perform by himself because his poem was just that good. Actually, the one that I just did, ‘An Abbreviated List of Shit that I Hate’ was based on that. So, that’s where I kind of fell in love with it.”

The love story continued on into high school in a series of poetry crash courses hosted by the English department. The “wow” moment ensued after poetry writing session in which he wrote a love poem about his little cousins’ pending youth. He said, “I could tell when I was writing it, it was good, because I compare writing something really, really good to like bleeding a little bit. I get this feeling where I’m not writing anymore, I’m just like bleeding on a page. You can feel it in your heart as you’re writing it.” To Crane, this is poetry’s purpose. It is a vehicle for emotional expression; it is an encapsulation of the aching internal dialogue that is never expressed in conventional conversation.

“In my opinion, as long as you’re writing about true experiences, true feelings, things that you care about, you can’t make a bad poem. [It’s] better than what you could ever say in a sentence or express it to somebody else. But when you get in front of that microphone, you’re just like…” he let out a whole bunch of air in the way that you let out a relieved breath after a midterm you have been dreading for weeks.

Here at UCSB, Crane has become a fixture of Poetry Club, hoping to spread a love for poetry amongst other freshmen that have or have not already had the same “wow” moment he had in his high school creative writing class. He and the co-runners of Poetry Club aim for the club to be a safe place where people feel comfortable enough to write “whatever the fuck they want”. After all, writing poetry is not as hard as it’s shaped out to be—it is something that anyone could pick up. All it takes is a little bit of “being bored in lecture” and a cell phone to jot down the “anthologies of stuff that’s either shit or good”.

For the record, Poetry Club meets at South Hall 2617 on Thursdays from 7 to 9.