After a lackluster performance in its loss to Hawaii Thursday night, 54 second half points along with a 15-3 run with two minutes remaining in regulation, propelled the UCSB men’s basketball team to its second home conference win in an 81-68 victory over Cal State Fullerton. 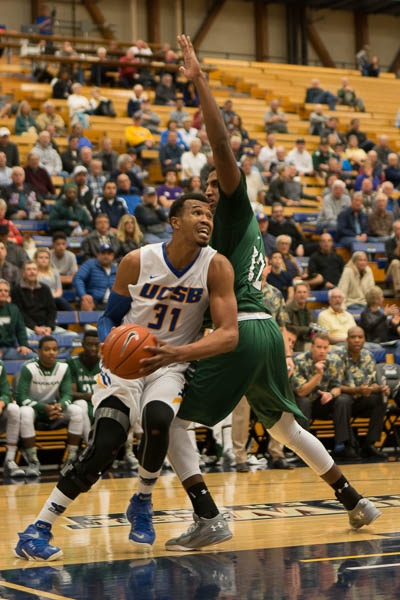 UCSB improved its record to 10-12 overall and improved from the sixth to fifth seed in the Big West standings with a current 4-5 record. Fullerton dropped to 9-13 overall, 2-7 in conference play.

“I thought the most important thing tonight was our effort, energy, and enthusiasm level,” Head Coach Bob Williams said. “We were better in all three areas so I’m very pleased with that. Now this is just one step that hopefully we can build on.”

As UCSB trailed 27-34 at the end of the first half, Williams stressed that energy needed to be a focal point for his team entering the second half. The Gauchos responded with improved energy and effort coming out of halftime, outhustling Fullerton in statistical categories that included rebounding, assists, field goal percentage, and ball possession.

Santa Barbara controlled the pace of the game in every facet of the second half— shooting 66 percent from the field and 77 percent from downtown while it contained the Titans for the majority of Saturday’s contest, holding CSUF to a dismal overall field goal percentage of 38 percent.

The Gauchos capitalized on their trips to the line as well, making 13-17 on the night from behind the stripe to finish with a 76.5 free-throw percentage, a major improvement from their 53.8 percent outing against Hawaii.

Influencing UCSB’s improvement on offense in the second half was its ability to penetrate the Titans’ defense when driving the ball.

“We got great space off of our drives [in the second half],” Williams said. “Our penetration created open shots for everyone.”

Nonetheless, UCSB was poised when handling the ball. It concluded Satuday’s game with just nine turnovers, a total below the Gauchos’ season average of 13.3 per game.

Childress, learning from his six point and five turnover performance last Thursday against Hawaii, was aggressive with his attack which provided a much-needed boost behind scoring threats Gabe Vincent and Michael Bryson. The Hawthorne, CA native finished with 13 points and seven assists on the night.

“Eric was shooting the ball under great control and had great poise,” Williams said. “He looked so in control of his game offensively and it really caused problems for Fullerton’s guards.”

Childress’ control of the ball also resulted in more scoring opportunities for Vincent and Bryson. The two tallied 45 points Saturday night, 20 for the sophomore guard and 25 for the senior Bryson. It was an efficient shooting night for Vincent as he finished 7-15 from the floor and made a game-high 5-7 from behind the three-point line.

“I was just trying to be aggressive and look for shots to attack,” Vincent said. “We can always get shots up from the perimeter, I was hitting the three tonight, but I was really trying to get out in transition and get to the rim.”

Bryson also flirted with a triple-double, grabbing a game-high nine rebounds and tying Childress’ game-high of seven assists. His 25-point performance helped him to climb to eighth-place on the Gauchos’ all-time scoring list.

Young players like Jarriesse Blackmon contributed quality minutes this weekend as well. While the freshman forward did not score in his nine minutes of action, the Salt Lake City native pulled down a career-high eight boards for his team, five of them offensive rebounds giving UCSB second chance opportunities.

“[Jarriese] is not afraid of the moment and not afraid to try and make plays,” Williams stated. “He’s a high energy guy and that’s what we needed out of him tonight.”

Santa Barbara will hope to take Saturday’s home victory and use its momentum for the team’s two-game road trip starting at UC Davis.

“[We need to take] the energy, enthusiasm, and accountability we played with tonight into next week,” Williams said. “[Our guys] understand that we’ve dug ourselves a whole and the only way to get out of it is by playing hard and playing better.”

The Gauchos will travel to the Pavillion on Thursday, Feb. 11 to face the Aggies. Tip-off will take place at 7 p.m.