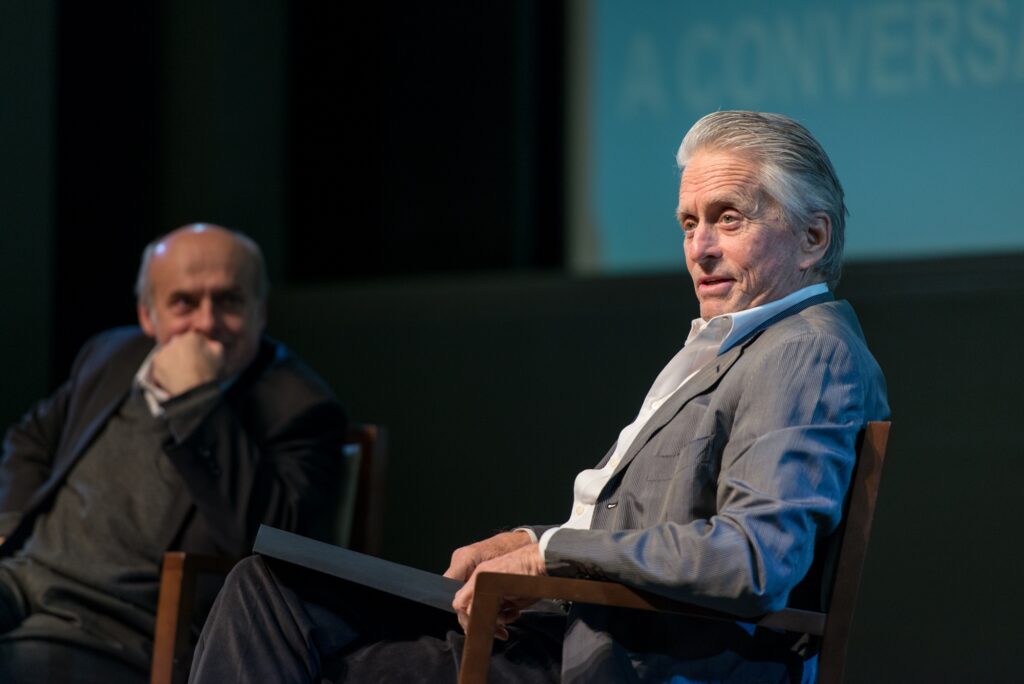 The event was part of a three-part university tour titled “Jewish Journeys,” which began Thursday at Brown University and stopped at Stanford University before arriving at UCSB.

Both Sharansky and Douglas became active in the Jewish community after their childhoods.

“I grew up knowing zero about my Jewish-ness,” Sharansky said of growing up in Soviet-ruled Donetsk, Ukraine. He said he knew his family was Jewish only because it was “written on the I.D. of your parents” and because of “all the conversations about anti-Semitism and discrimination.”

Sharansky said being a Jew at the time was like being “born with some very rare disease,” and the only “medicine” was being the best at your trade.

“Your parents are telling to you, because you are Jewish, everywhere — in school, in university, in kindergarten — you must be number one,” Sharansky said. “In physics or mathematics or in chess or in music or in dance, whatever, it doesn’t matter, you must be the best at your profession. That is the way how we Jews survive.”

Sharansky said many Jewish people felt a sense of community after the Six-Day War of 1967 — when Israel gained the upper hand against the Soviet Union and its Egyptian and Syrian allies —leading to increased activism among Jews.

After the war in 1967, Sharansky said, “Israel entered our lives very powerfully because the victory of Israel over allies of the Soviet Union was a huge humiliation for the Soviet Union.”

Sharansky said, following the Six-Day War, he realized the importance of his connection to the Jewish community.

“Suddenly, you find out, you discover that all the people around you, your friends and your enemies, they all connect you to the Israeli army,” Sharansky said.

Douglas said after his son’s bar mitzvah, his family visited the Western Wall in Jerusalem, after which the Genesis Prize Foundation recognized his commitment to the Jewish community.

“A few pictures were taken; it made the Israeli press,” Douglas said. “The next thing I know, the Genesis group contacts me and presents this incredible prize, this opportunity which I was truly touched because I felt I was part of a tribe.”

“That is the place where Jews are coming for 3,000 years to talk to God and at the same time; it is the number-one national symbol,” Sharansky said.

Sharansky said years of negotiations have resulted in the understanding that even though some compromises regarding the Wall may be painful, the unity of Jewish people is more important.

“For me, it is very important that we as a Jewish community always will be open and welcoming for those who are invested,” Sharansky said.

Douglas said the Jewish people have reason to be optimistic about their history and the future.

“It is a sense of community, and I have been deeply inspired by my son and by my father,” Douglas said. “So I see and feel a continuity of generations, a sense of immortality. I am hopeful and optimistic.”

“People always say, ‘don’t talk about politics or religion and you will always get along.’ I would encourage a dialogue and being able to open up and expose yourself and have the support of Hillel behind you,” Douglas said, referring to the Jewish nonprofit student group.

“For me, Santa Barbara Hillel has enabled me to reconnect with my Jewish roots,” Packer said. “It allows me to continue my cultural exploration of Judaism and opens the dialogue on religion.”

How about we address the issue with zionism and its fascist appeal? Or what about the notion of Jewish supremacy advocated by right-wing lukud party members in Israel? How about Palestinian right-to-return? This is such a one-way article framed to invoke sympathy for a naive audience.

Go drown in a sewer you dickless cuck

wow there’s some real integrity and understanding there buddy SMH

It is not helpful to use words that you do. We need to address issues with understanding. I know it may sound corny, but please think of ways to help people who do not understand the complexities of the Israeli situation and their need for survival. Unfortunately the Palestinian authorities have let their people down by not accepting Israel’s past offers, so now they need a scapegoat to blame someone other than their own leaders. That is how it has always been.

because Islam is all about freedom and Palestine is all about peace…. right? SMH However Klein makes a point in that that discussion is not on point.

Why don’t you add MD, DDS, and former Chancellor while you’re at it?

How about the anti-Semitism that the pro-Palestinian students have brought to our college campuses?

For an Alumni-Reader, PhD, you have trouble staying on point.

The issues you raise are real, but have no direct relevance to topics discussed.

Since you appear eager to justify your remarks by appeal to authority, I will join the game: S_Klein, Prof 9, UCSB, Psychology & Philosophy

In the spirit of Michael Douglas:

Is it not time for we Jews to reject infant male genital mutilation, aka circumcision?

There is a beautiful new tradition in the making called Brit Shalom, that non-violently welcomes children of ALL genders into world .

Please do a web search on “Choosing Brit Shalom Over Brit Milah” for details.