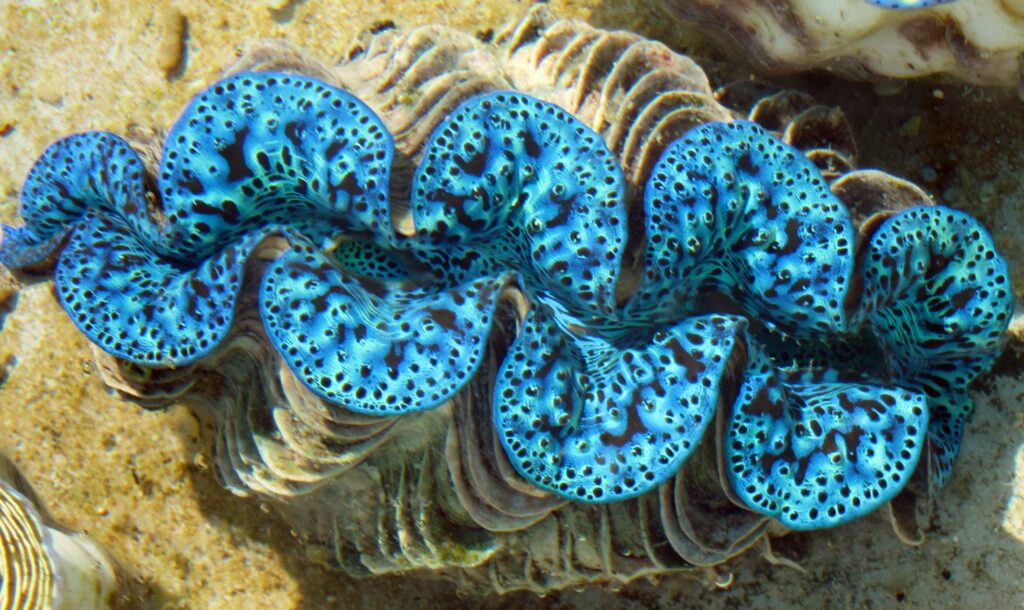 Giant clams reflect white by color mixing analogous to RGB-pixelation in televisions, cell phones and other electro-optical displays. As one component of this mechanism, bright blue reflects from nano-scale structures in cells of a giant clam’s epithelium.

Giant clams contain light-reflecting cells, called iridescent cells, on their exposed epithelium that allow the giant clam to reflect incoming sunlight into vivid shades of gold, blue and green. The giant clam can mix and reflect these colors together to produce white light, which the giant clam also can direct into its algae-containing tissues, aiding the algae in photosynthesis. The giant clam can also use this same process to direct sunlight away from its exposed flesh when solar rays become harmfully excessive, a condition common in its shallow water, equatorial environment.

Using a combination of microscopy and spectroscopy with an instrument he designed and built for these investigations, Ghosal discovered two different mechanisms by which giant clams reflect white light. Both mechanisms depend on multilayered discs containing a unique protein called reflectin. The discs act as Bragg reflectors, structures that reflect different wavelengths or colors of light depending on their thickness and spacing.

Ghosal found that some of these reflective colors in iridescent cells operate analogously to TV screens, smartphones and tablets. Patches of white created by the mixing of different colored reflective cells in giant clams work in a way that is analogous to how electronic RGB technology mixes colored pixels together to produce white light.

“In Tridacna maxima, each individual iridescent cell reflects a single unique color, but these iridescent cells, when clustered together, collectively reflect white light, while in a closely related species such as Tridacna derasa, the Bragg reflectors are spatially heterogeneous with differences in disc density and spacing reflecting different colors in the same cell,” Daniel Morse, director of the research and professor emeritus of biochemistry of molecular genetics at UCSB, said. “When looking through the individual cell with a microscope, you can discern the different colors present within the cell, but macroscopically, the cell looks white.”

The reflectors act simultaneously as a sunscreen, protecting the algae and their animal host from physiological damage from too much sunlight, while at the same time redirecting sunlight to uniformly illuminate the vertical columns of algal cells deep within the clam tissue.

“The majority of photons that hit the epithelial cells are directed deeper into the clam tissue. The angles at which the photons are directed downward into the tissue uniformly illuminate columns of algae within the tissue,” Morse said. “These algae live and grow, forming dense colonies organized in thin vertical columns. This process, known as Mie scattering, by which the iridescent cells scatter sunlight forward into the giant clam’s interior, ensures that all the algae get the optimal amount of sunlight for photosynthesis — not too much, and not too little. This gave us a clue for redesigning solar cells to produce electricity more efficiently, using the trick that evolved in the giant clams.”

Mic scattering technology allows researchers to produce power through solar cells in a more efficient manner by maximizing output from a smaller area than current technology.

“Putting Mie scatterers on top of solar cells analogous to the giant clam to get light directed at multiple angles inside while also organizing the solar cell’s photoreceptors vertically instead of in the conventional two-dimensional flat layer could allow us to produce three-dimensional solar cells,” Morse said. “By using three dimensions to pack more solar-collecting molecules than in the typical 2-D solar cell, more power could be produced from a much smaller area than the area currently used by solar farms, thus improving efficiency, lowering costs per watt and, ultimately, lowering the amount of surface area required for solar power plants.”

The MCDB-ICB research team is currently collaborating with Guillermo Bazan, Ph.D., at UCSB’s Department of Materials and Chemistry & Biochemistry, and Jon Schuler, Ph.D., at UCSB’s College of Engineering, to develop more efficient solar cells using the same principals that were first discovered in the giant clam.

A version of this story appeared on p. 18 of the Thursday, Feb. 4 print edition of the Daily Nexus.